Based on the principles of Scrum, Scrum.org provides comprehensive training, resources, assessments and certifications to help people and teams solve complex problems. Throughout the world, our solutions and community of more than 340 Professional Scrum Trainers teach the same content empowering people and organizations to achieve agility through Scrum.  Ken Schwaber, the co-creator of Scrum, founded Scrum.org in 2009 as a global organization, dedicating himself to improving professionalism. 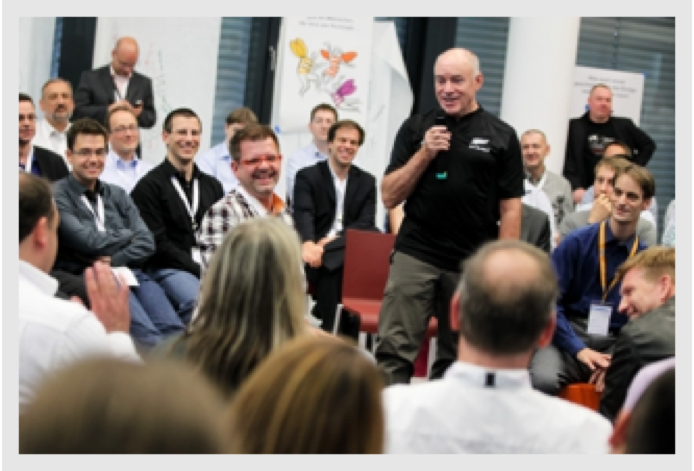 Follow us on Twitter @scrumdotorg and read more from our community of experts on the Scrum.org blog.

The Genesis of Scrum.org

Ken Schwaber initially attempted to develop Scrum.org’s programs elsewhere, but ultimately, he found that to accomplish his goal of improving Scrum knowledge, training, and implementations, he would need to break away and start Scrum.org.

Below, you can find an excerpt of a letter from Ken Schwaber to Scrum.org trainers and partners that described why he started Scrum.org.  It was written March 30, 2010 and posted June 15, 2010

“Why did you found Scrum.org?" I’ve been asked these questions countless times since I created Scrum.org last fall. This is the story of my journey with Scrum, starting with its creation, moving through the establishment and evolution and ending with my work with Scrum.org. This journey has been shaped by two opposing forces: the desire to do the right thing, and the desire to make money. I formed Scrum.org to refocus my efforts on doing the right thing.

The story of Scrum’s beginnings is well-known, so I won’t spend much time on it here. Jeff Sutherland and I had been using Scrum for ten years prior to the meeting at Snowbird where we and others signed the Agile Manifesto. This manifesto, along with my first book about Scrum (“Agile Software Development with Scrum”) and the emergence of modern integrated development environments (IDEs), helped Scrum spread like wildfire in the early 2000s.

A few years later, Martin Fowler and I were flying back to Boston from a conference about scaling Agile projects at the University of Calgary. We were dismayed that so many of our customers hadn’t understood what Agile and Scrum were about. Martin and I decided that some type of instruction and even certification would be necessary to remedy the situation. I went on to develop a two-day ScrumMaster course, the first of which was conducted at ObjectMentor in Chicago in 2002. I certified the attendees as just that – attendees – and listed their names on my website, controlchaos.com. I conducted many of these training sessions during 2002 and 2003. The course became more refined and experience-based. It began to distinguish between what Scrum is and how Scrum should be used. I considered the class a success because in my consulting work I could see how much better class attendees were able to use Scrum. I received great feedback from course attendees, and as word spread the courses became extremely popular.

By early 2009, more organizations were using Agile processes than waterfall processes, and of those employing Agile 84% were using Scrum. However, less than 50% of those using Scrum were developing in incremental iterations, which are the heartbeat of Scrum. Martin Fowler wrote in his blog that he was encountering many instances of "Flaccid Scrum." Teams were using Scrum vocabulary but weren’t able to create a potentially shippable increment of functionality within a single Sprint.

I launched three initiatives to remedy these problems:

I gained the freedom to restart an organization that was again mission driven. I was free to pursue my goal of delivering Scrum developer training, among other things. At that point, I sat down and made the following commitments:

Scrum.org would follow its mission within a framework of checks and balances

Our mission remains the same today as it was when we started - to help our profession rise to the demands of an increasingly complex world that relies on increasingly complex technologies and products. Advances in materials and techniques can only succeed if we shift to a collaborative, creative approach to build the enabling software.

As we use Scrum, we continue to find new opportunities for professional improvement. As the inspect-and-adaptation mechanism of Scrum uncovers issues, we intend to develop and apply new programs at Scrum.org. We then intend to inspect their effectiveness, adapt to circumstance, and improve whenever necessary. These programs will refine bodies of knowledge, create training and coaching capabilities, and offer assessment and certification of knowledge and skills. To that end, we are aligning communities of people around common goals to encourage ownership, participation, and advancement.