Who is responsible for dependency management?

Here's a question: who is responsible for dependency management? It feels like in a traditional world, it would be a project manager, but as project management duties are spread throughout the Scrum team, who is the person mainly responsible for this? For example, in my team the PO works with the other POs to prioritise the dependent items into their sprints. I have read that the Scrum Master should be mainly responsible for managing dependencies, but in my team this feels like a bit of a middle man idea.

It would come down to stage where the dependency lies.  If the dependency is identified and requires management while before the impacted work is part of a Sprint Backlog, it would seem this is part of Product Backlog Management, and therefore should be responsibility of the Product Owner. If the dependency has been accepted as 'manageable' and the Development Team has taken it on board into the Sprint Backlog, the responsibility would be with the Development Team.  You could say that the Scrum Master's responsibilities would be to help the rest of the team and the organisation find a way to remove this dependency altogether.

...as project management duties are spread throughout the Scrum team, who is the person mainly responsible for this?

Why should any one person be “mainly” responsible for this? Is anything inhibiting skilled, self-organizing teams from wholly owning this matter and managing their own dependencies?

Thanks for the replies. I do like the ideas that the teams self-organise around them and identify which stage of the dependency cycle makes most sense for them to help out it.

It does feel that having the Scrum Master as the dependency manager puts them in a kind of project manager type role. 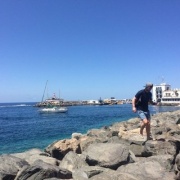 I have been identifying and managing them recently.

My honest thoughts are that a decent ScrumMaster should be the one asking the question "does anyone else need to know about this?"

With the best will in the world, development teams can sometimes be insular, so though they are the most important element in terms of defining and implementing the technical solution, perhaps not best for mapping out and managing the links.

A decent systems analyst/someone doing a similar role can save you a lot of pain.

Since most dependency issues (but not all) often involve several Scrum teams working together, I would argue that the best place to look for the answer to this would be the Nexus Guide.  In particular, the term "Integration" in Nexus includes dependency mgmt.  The NG is only like 11 pages.