Challenges in Scrum in an Onshore-Offshore model 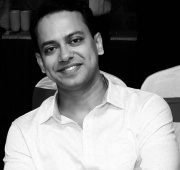 (a.) The foremost challenge is with the Scrum events - The Scrum team cannot have their Sprint Reviews & the Sprint Retrospective on the same day because Offshore team just get around 3 hours of overlap with the US time, most of which goes in the Sprint Review.

(b.) On the next day, the India Dev team have to wait till the US team comes in (PO+two US-based Dev Team members) for the Sprint Planning to happen. By that time, India Dev team loses almost 5 hours of productive time of the first day of the Sprint.

(c.) Sprint Retrospectives for the previous Sprint happens on the first day of the next Sprint (usually after the Sprint Planning & because of the issue described in point a). But because the team had already planned for the current Sprint and get into a 'zone' for thinking about how to best deliver the Sprint Goal for the current Sprint, the Sprint Retrospective tends to not add much value as team doesn't reflect back on the previous Sprint, to the extent its needed for doing a retrospection.

(d.) The Scrum Master (me), who is based out of India, doesn't get to spend much time with the PO or the other 2 Dev Team members to the extent its needed, in order to help remove their impediments, as they're US-based.

(e.) In case the India-based Dev team members have any questions to the PO related to the Stories in the current Sprint, they need to wait till the start of US-time, which in some cases, hinders the flow of work.

I understand we're talking more about leveraging the capabilities of distributed teams now a days to bring forth diversity and inclusiveness in our teams, but these are some of the practical challenges that we face in these situations which warrant attention. Any suggestions or thoughts on these challenges?

Scrum Teams, including Development Teams, are founded on the principle of self-organization. Has your team chosen to self-organize in the way you describe, with members in these geographies, or is someone else making these critical decisions? What control do your team members actually have over such matters, and why does it now fall to them to provide remedy?

Thanks for your response!

The principle of self-organization, as defined by the scrum guide, never says explicitly whether the Development team should have the authority to staff themselves. Going by the Characteristics of a Scum Team:

They are self-organizing. No one (not even the Scrum Master) tells the Development Team how to turn Product Backlog into Increments of potentially releasable functionality.

However, even if that would have meant that the Dev team should have the authority, it is not the case with respect to my Organization (don't know really how many Org give that kind of flexibility to their people..). PO positions are generally staffed near-shore to the Client, who are US-based in my case, along with one senior developer position.

Therefore, to answer you, my Dev team has not chosen itself to be self-organized in this way nor do they have any control over such matters. In fact, this is one of the most common Outsourcing model IT companies have these days wherein the majority of the team is in India and the PO/Senior positions are near-shore to the Client (US etc.). I really wonder how do we optimize the Scrum process framework in these projects (which runs on to a huge number) so as to develop, deliver and sustain complex products in the most effective way possible. Thanks!

I've worked with almost the exact situation you are describing with a couple of teams.  What those teams decided to do was to flex one day's schedules to allow a longer overlap so that they could do their Scrum Events.  They alternated so that for Sprint A, the US team would come in earlier, Sprint B the India team would stay later.  With 2 weeks Sprints, that only "inconveniences" part of the team once a month.  They would also schedule one day mid-sprint to spend the entire overlapping time doing nothing but refinement activities.  This helped our teams to address your a), b), c), partially d), and partially e).

For e) this was dealt with by the one day of dedicated refinement time.  The more you can learn about a situation before trying to solve it, the better equipped you will be to make decisions as needed. And as a Scrum Team, everyone is going to trust each other to be making the right decision and know that no one will intentionally do anything to cause harm.  So, if the Development Team in India has a question or decision to make, let the team make the decision and then communicate it to the rest of the Scrum Team as soon as possible. Then it can be inspected and adaptions made if necessary.  When we introduced the refinement sessions, we found that the questions that only one person on the team could answer seemed to become rare.

Thanks a lot Daniel for your thoughtful comments! I particularly liked the idea of asking India team to stretch a bit more on one Sprint and asking US team to come early on the next.

Although we always have the issue with not being able to carry out the Sprint Review and the Retrospective on the same day as Reviews are attended by other Stakeholders outside of the team as well and they won't come earlier to ensure India team gets enough time to accommodate both the events.

However, that being said, there's only so much you can do to address the onshore-offshore work models and need to make some necessary adjustments. Eventually, the thing to keep in mind is - following the framework by letter isn't worth if it defeats its spirits, we would always need to make some adjustments in order to extract the maximum value and eliminate waste for the system!