I am working as Resource Manager/Team Leader of developers in an organization who is currently trying to move from water-fall methodology to Scrum.

I personally continue to manage my team with our water-fall methodology.

But, I am starting to send on temporary assignment some of my developers to Scrum team.
Following the Scrum guide, I do not intervene in the way these developers organize their work within the Scrum team.

My issue is that I have just received a request from the Project Manager organizing the Scrum project to, for next month, allocate one of my developer 50% to the Scrum development team.

According to my (poor) knowledge of Scrum, working as a developer 50% in a Scrum Development team is a bit in contradiction with the Scrum philosophy... But I might by wrong, looking back to the "The Development Team" section of the "The Scrum Guide", I do not see a word about how (much) developers should be dedicated to the development team.

If you could point me to some reference documents to clarify this point, it would be great!

Many thanks in advance!

Hi Patrice,
welcome to the forum.
The fact that a "Project Manager" "organizing" the "Scrum project" wants to "allocate" the developer clearly shows that whatever they are doing over there, it is definitively not Scrum.
To my understanding the Scrum Guide does not forbid a developer to work in two teams.
However in Scrum practice, this is not accepted as a permanent situation, but only in rare cases, e.g. when the developer has scarce skills which need to be spread to other teams. The decision is made by the teams, and not by some Project Manager (who does not even exist as a role).
The reason is that on average each additional project costs the developer 20% productivity. This is money you do not get any value from (aka waste).

> My issue is that I have just received a request
> from the Project Manager organizing the
> Scrum project to, for next month, allocate one
> of my developer 50% to the Scrum development team.

Does this "request" originate with the Scrum Team itself? Is it merely being relayed by the PM?

If so, I'd check on why the team needs the developer in the first place, and make sure that the request is well founded. For example it could be that they don't fully own their development process and that their Definition of Done has external dependencies. A Scrum Team should be able to articulate resource requests in terms such as these.

Scrum encourgages dedicated team members and ideally a software engineer should be working on a single scrum team. The key for this to happen is that any team member should be able to pick up any back log item from sprint back log. If the engineer has specialization like a DB developer , UI, then it is most likely they wont be needed full time on the single scrum team. In that case it should be okay to split the time, but I would see if the engineer would be interested in expanding there skill set.
Since you mentioned that your organization is transitioning towards scrum this might be aceptable situation.
Make sure that the product manager/ ownet is aware of the actual allocation. 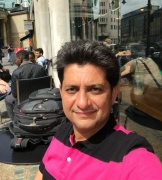 Teams take a while to start operating at their optimum. Context switching is expensive and leads to waste and reduces productivity. “2x50%” is less than “one 100%” allocation.