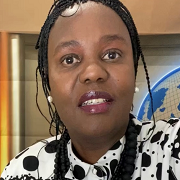 There's nothing, either in the Scrum Guide or the Nexus Guide, that says that each Scrum Team needs to have a dedicated Scrum Master. In the context of Nexus, it says that the Nexus Integration Team's Scrum Master "may also be a Scrum Master in one or more of the Scrum Teams in the Nexus", which leaves the door open for several possibilities.

From personal experience, I can say that the number of teams that a Scrum Master can support depends on the skill and maturity of each team. Hopefully, by the time you've applied a scaled Scrum framework (whether that's Nexus or Scrum@Scale or LeSS), the individual teams have a good handle on the Scrum framework and the Scrum Master isn't necessarily facilitating all of the events for all of the teams. In this case, I've successfully been the Scrum Master for 4 teams at once, and I feel that's probably close to the limit. I'd tend to recommend 3 or 4 as the maximum. However, when teams aren't very skilled with Scrum and need more facilitation and coaching, that takes a lot more time from the Scrum Master, so you'd need multiple Scrum Masters across all of the teams to make sure that the teams have the support that they all need.

For a Nexus of 9 Scrum Teams, I'd recommend at least 2, ideally 3, dedicated Scrum Masters. Additional members of each team should have some level of facilitation skills, as well. Anything else would be result in very burdened Scrum Masters.

How does this work? For  a nexus with 9 scrum teams, does each Scrum team have a Scrum Master?

Scaled Professional Scrum is still Scrum and each team is still a Scrum Team. So yes, each team must have a Scrum Master.

Each team will have a Scrum Master. They may or may not be the same person in each case.

@Thomas Owens ,@ Ian Mitchell Your responses are much appreciated. Thank you very much.