Belarus: Self-Organization of the Nation 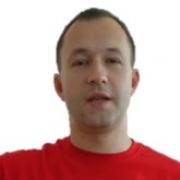 You may have heard about the tragedy of Belarus, a country with a population of 9.5 million residing between Poland and Russia. Thousands of people have been tortured and repressed after the falsified presidential election held on 9 August 2020. An interesting phenomenon though is that hundreds and thousands of people continue to self-organize and struggle without any leaders, centralized structures, and opposition parties. How is that possible? 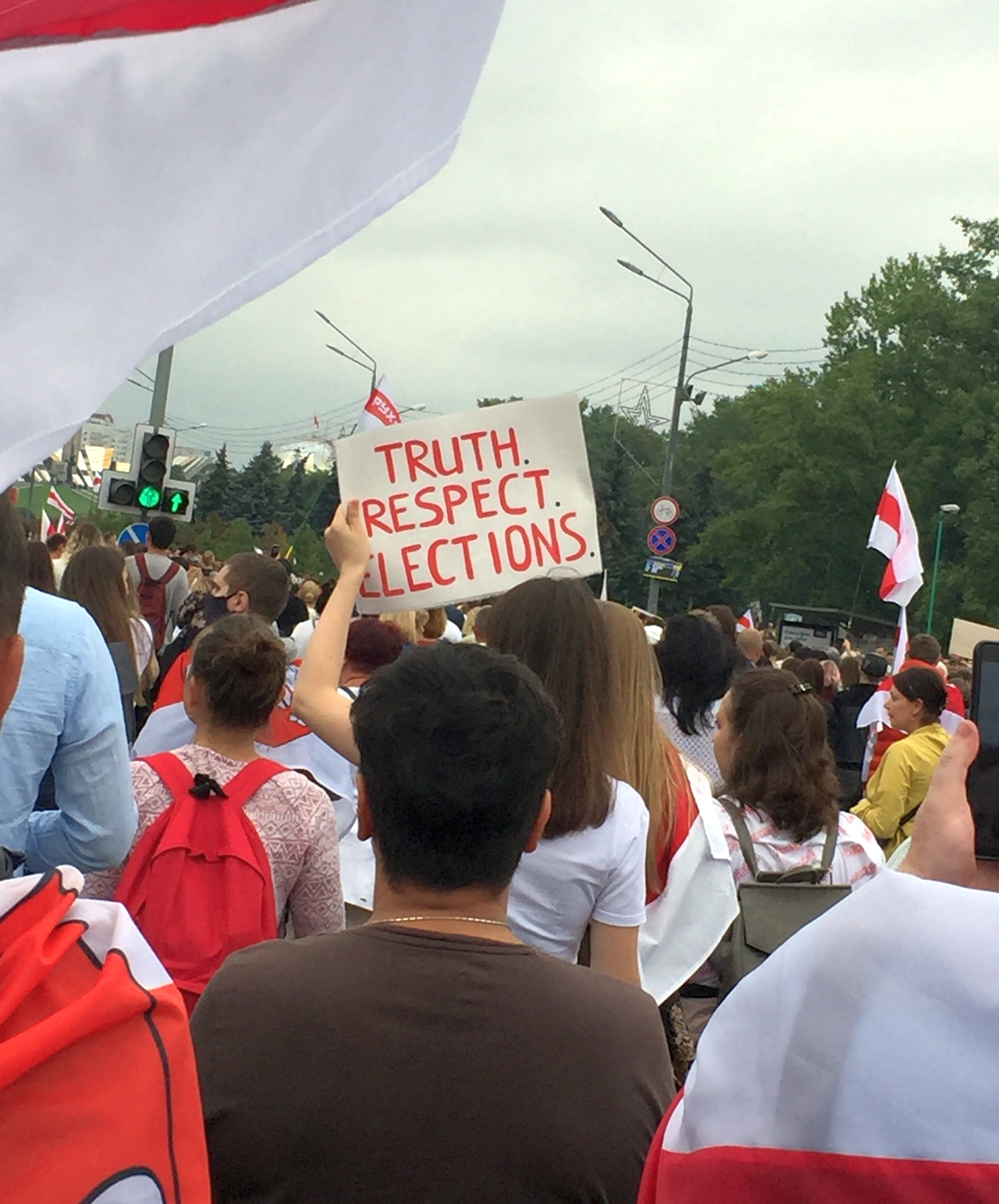 No leaders, no problem?

Alexander Lukashenko, often referred to as “the last dictator in Europe” has ruled Belarus for the last 26 years. He has built a very stable regime based on repressions and total control of the society by special services like KGB, police, and others. One of the principles they always follow is that any leader that openly stands against the regime and tries to consolidate the people is immediately isolated, arrested, deported from the country, or even killed. In that sense, the current presidential campaign started in a traditional way when 2 of the most popular leaders (Sergey Tihanovsky and Victor Babariko) were imprisoned and not even registered as official candidates. The 3rd one (Valery Tsepkalo, the founder of Belarusian IT park) had to leave the country because of being threatened to lose his children by special services.

The thinking of Lukashenko is that without leaders people are paralyzed and depressed. They are just nothing or “sheep” as he calls the protesters. Surprisingly for him, the “sheep” responded with unprecedented protests including striking factories and universities, hundreds of thousands of people in the streets, chains of solidarity across all major roads, millions of dollars collected for repressed and tortured people, dozens of volunteering teams, manifests and performances from doctors, teachers, sportsmen, actors, and even a brand new alternative electronic system for counting people’s votes (since no one trusts official voting results).

People of Belarus learned the hard way that they can act without leaders if everyone becomes a leader.

Most of the self-organization happens bottom-up through local communities and district groups in messengers and social networks. Almost every street in Minsk has a local chat where people share pain, coordinate their plans, setup regular offline meetings and demonstrations, distribute duties, ask for help and get help from neighbours. Thousands of people have become volunteers like a colleague of mine from a local IT company who told me an interesting story. As a volunteer, he worked in the camp close to the “Okrestina” prison, the place where hundreds of people were beaten and tortured with inhuman sadism and cruelty. These people needed medical, material, and psychological help after release. Their relatives together with volunteers were waiting for weeks close to the gate of the prison. The whole camp was organized fantastically well including logistics, food, cleaning, etc. At one moment, though, some volunteers proposed to “improve the effectiveness” in the camp by introducing “coordinators” that will be “responsible” for certain areas like garbage cleaning, etc. The coordinators started to assign tasks to the volunteers which immediately caused... demotivation and resistance. The same duties now became an obligation and routine. After the discussion, people eliminated the role of coordinators. 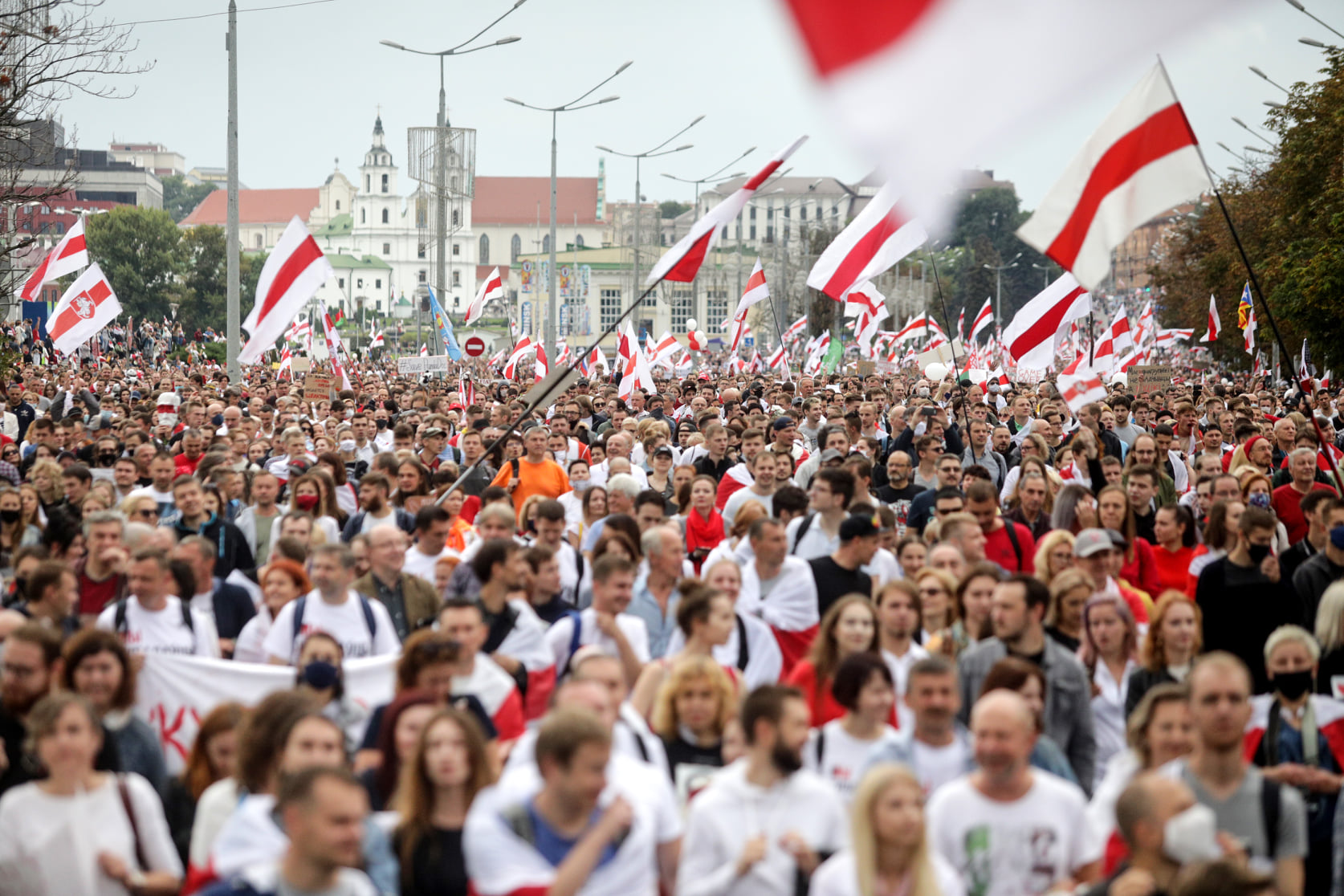 What’s the power that made thousands of Belarusians take a risk and fight the cruel regime together without any formal leaders? That’s obviously a big common goal. Everyone understands that today we stand against the absolute evil like it was during the 2nd World War when every 3rd Belarusian perished. There are lots of parallels between fascism and the regime of Lukashenko. Yes, we have to fight evil. Again. And the understanding of this generated millions of bottom-up interactions and acts of sincere, generous help. Everywhere across the protests people provide drinks, food, protection, transport, and other things help to unfamiliar people. They keep their entrances open in case someone needs help escaping from brutal police forces. People get connected in their blocks,  local and professional communities to build plans and resist the regime in a distributed way.

I volunteered to work for a week as an observer at the local election point in the team of 5 independent observers. This was a very diverse team with lots of different opinions and discussions. I bet we would have never been able to work together as a team if only we didn’t have a common goal that was so much more important than all our quarrels and misunderstandings. And the same thing is happening everywhere across the country. Many people say that this August, Belarusians for the first time in their history became a nation. The joint fight for justice helped us identify better who we are and what we value, indeed. We discovered how many brave, creative, and kind people live close by. We, Belarusians, re-discovered the best qualities of our nation. We understood what our symbols are. We found our identity. We became a nation. And this is the case with every self-organized group I know – they obtain some kind of identity to differentiate from others and feel like a jelled group.

Belarusian protests are supported by majority of the population but they are absolutely peaceful while the opposite side uses all kinds of weapons and lots of forces. Almost every protester felt disappointed, frightened, and hopeless at some point in time. We constantly feel a threat for ourselves and our children: any person who participated in peaceful demonstrations is a criminal from the regime standpoint since the demonstrations are “illegal”. The punishment in most cases is an administrative arrest for up to 15 days. Right now, when I write this post the brother of my wife, IT specialist, is in prison waiting for 3 days for the court session. Hundreds of people are in prison for several months falsely accused of criminal offences. What is the source of hope, courage, and energy in these disastrous circumstances? It’s people around that create a very strong self-reinforcing healing cycle. When someone is desperate he just looks at others and feels that we just cannot lose and we shouldn’t stop fighting. People support each other and reinforce the right behavior. 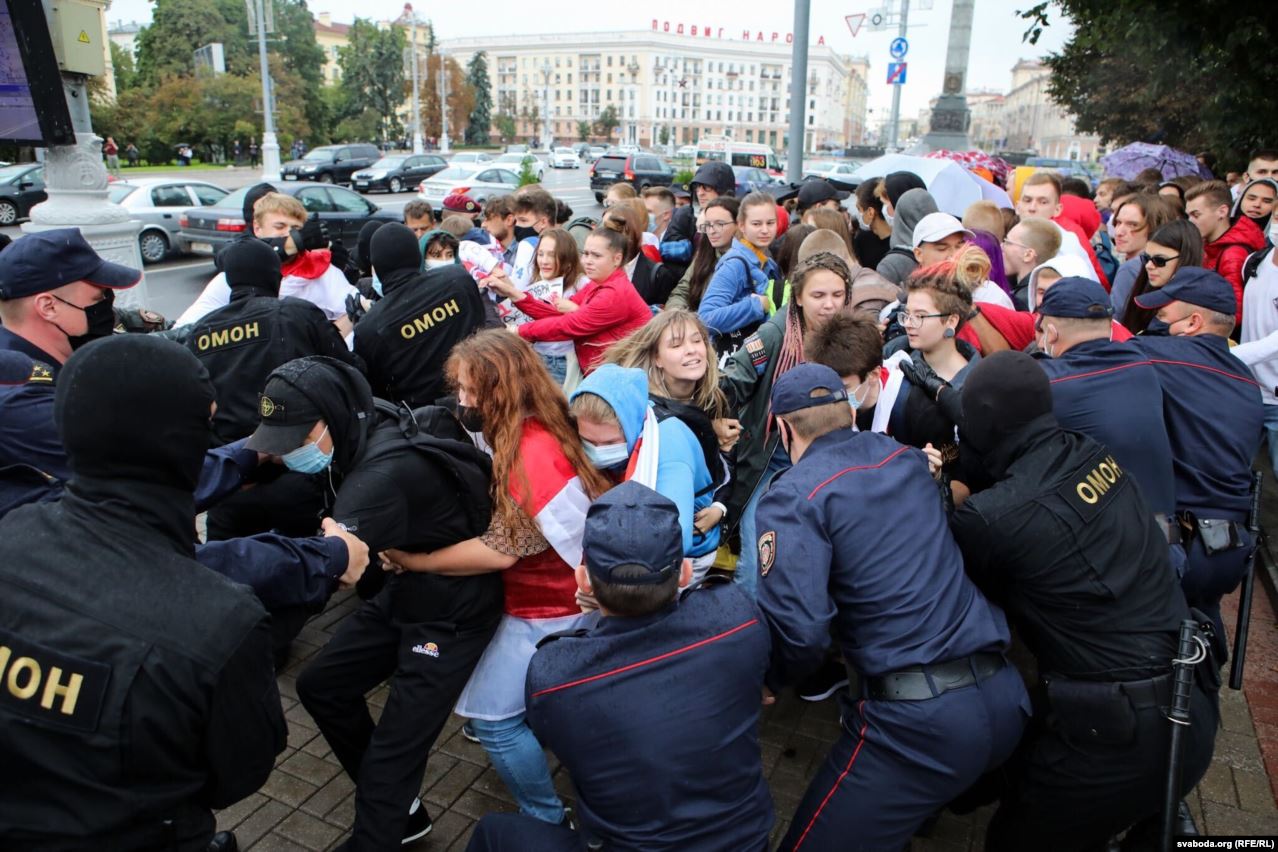 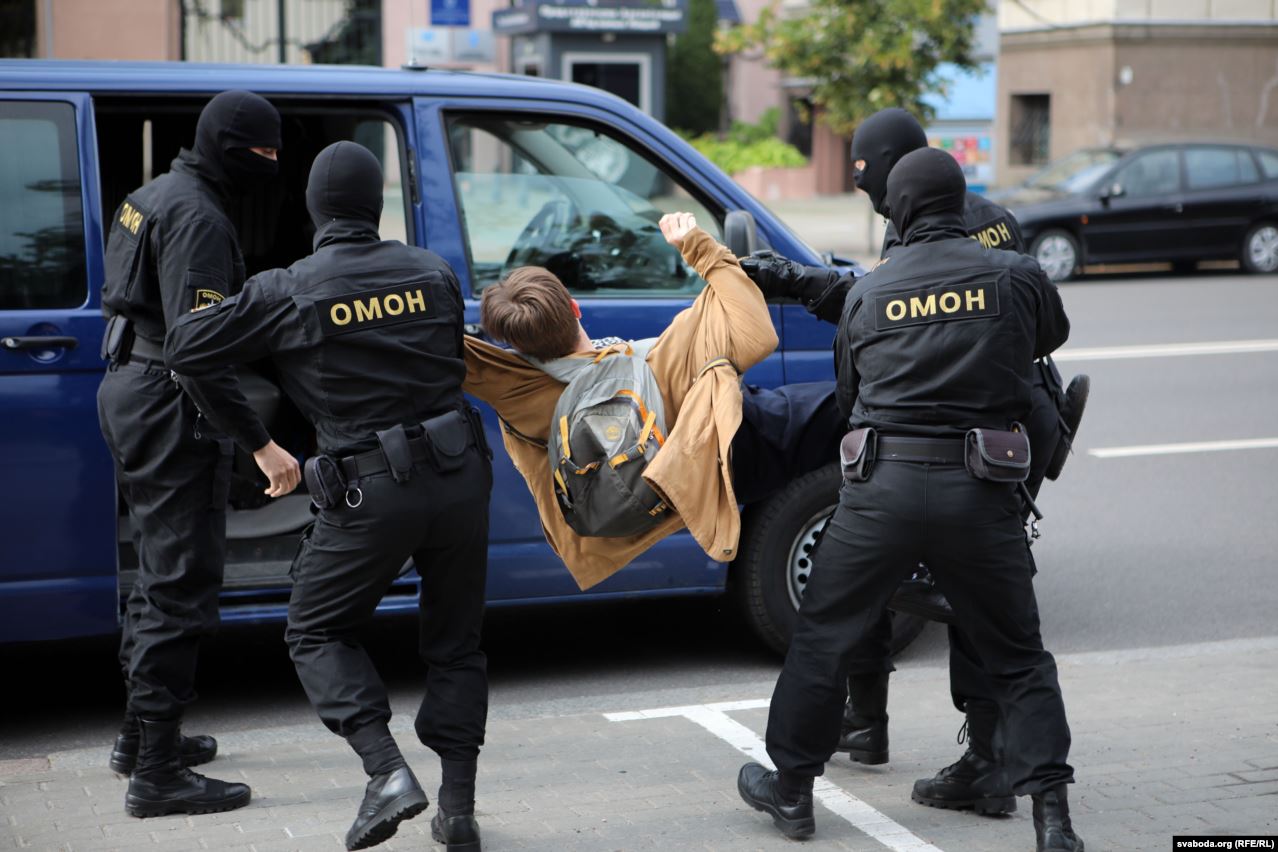 As mentioned above the regime isolated and prisoned all the political leaders. But luckily the old-school thinking of the regime always associated a leader only with a man. They didn’t care much about women because “a woman is not able to be a president in our country” according to Lukashenko. Women should “cook borsch, not do politics” according to the Head of the Central Election Committee.  So they recklessly allowed Svetlana Tihanovskaya (unemployed wife of the prisoned politician) to become a candidate. A month later she crushingly won the election but was made to leave the country terrified by the special services. The same mistake was repeated by Lukashenko in the following days after the election when they arrested thousands of men in the hope to stop the protests. Belarusian women overcame their fear and stood in the first lines opposite to the armed police instead of their men. 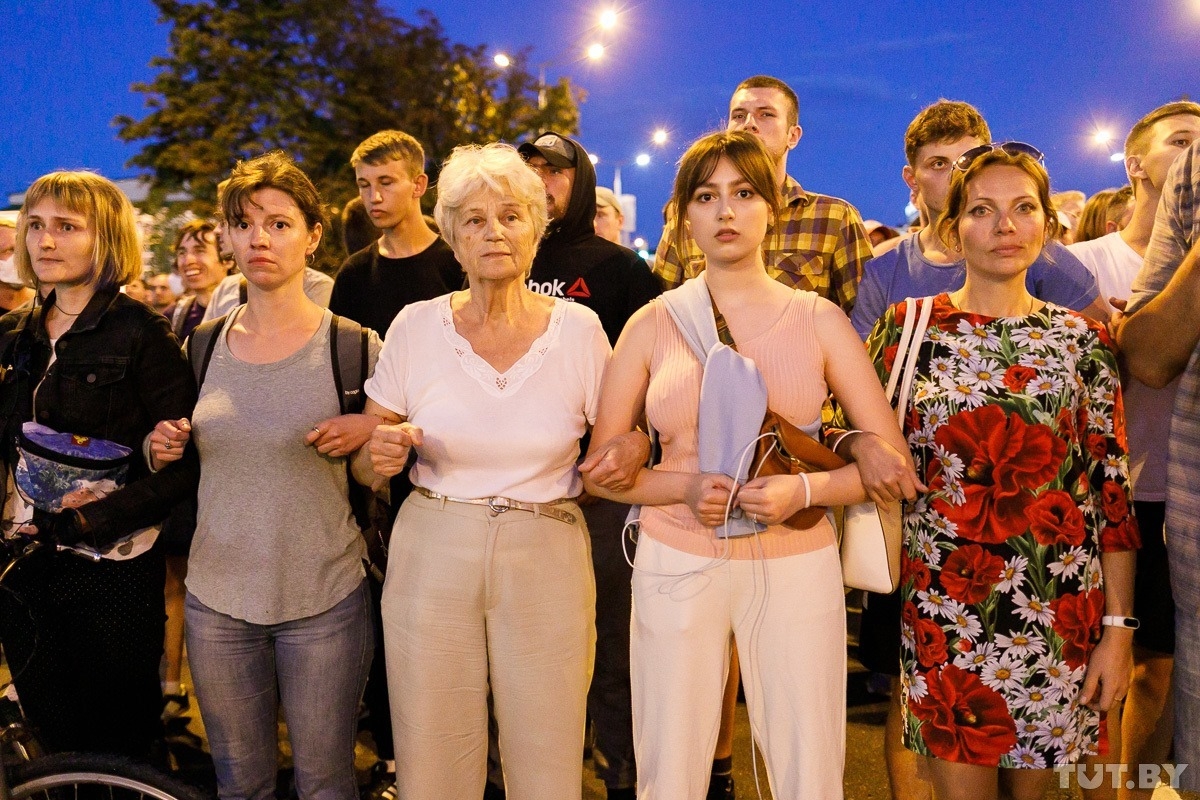 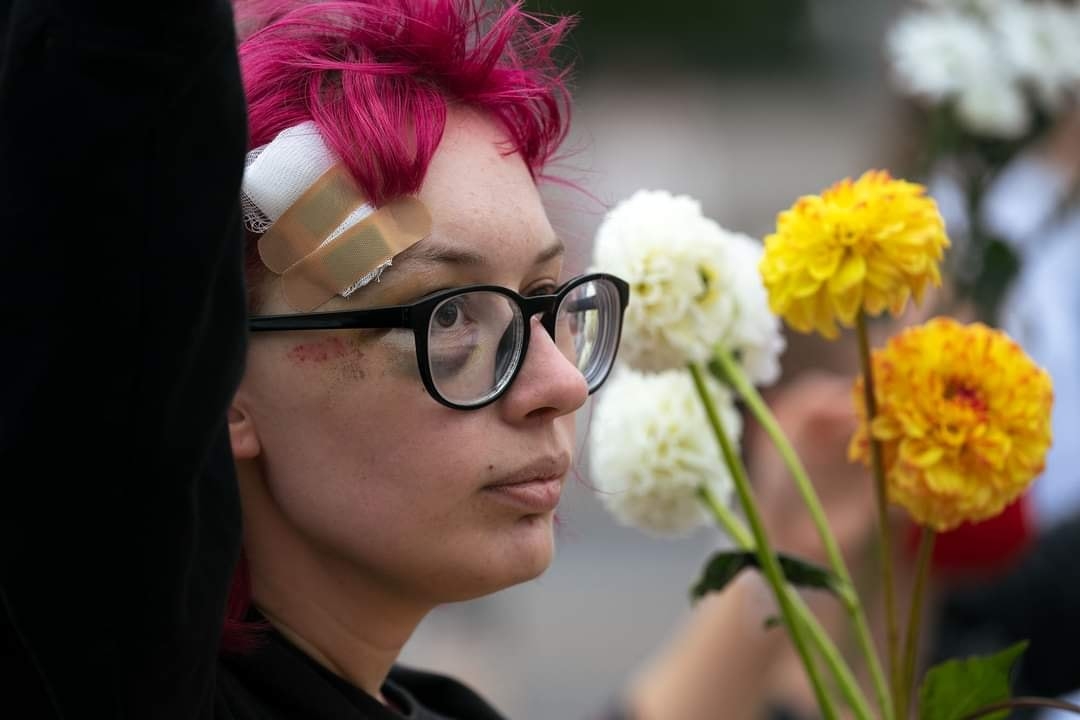 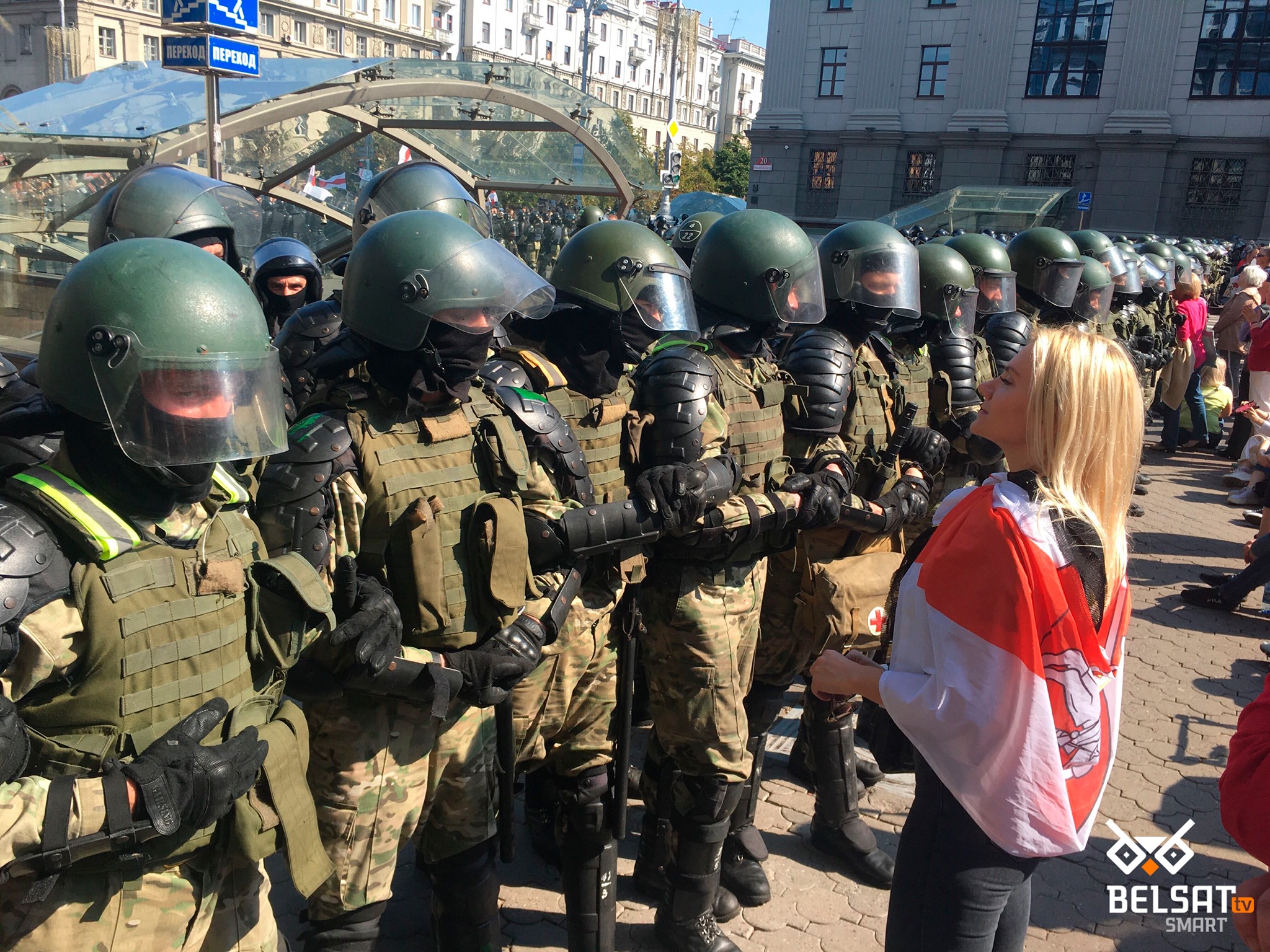 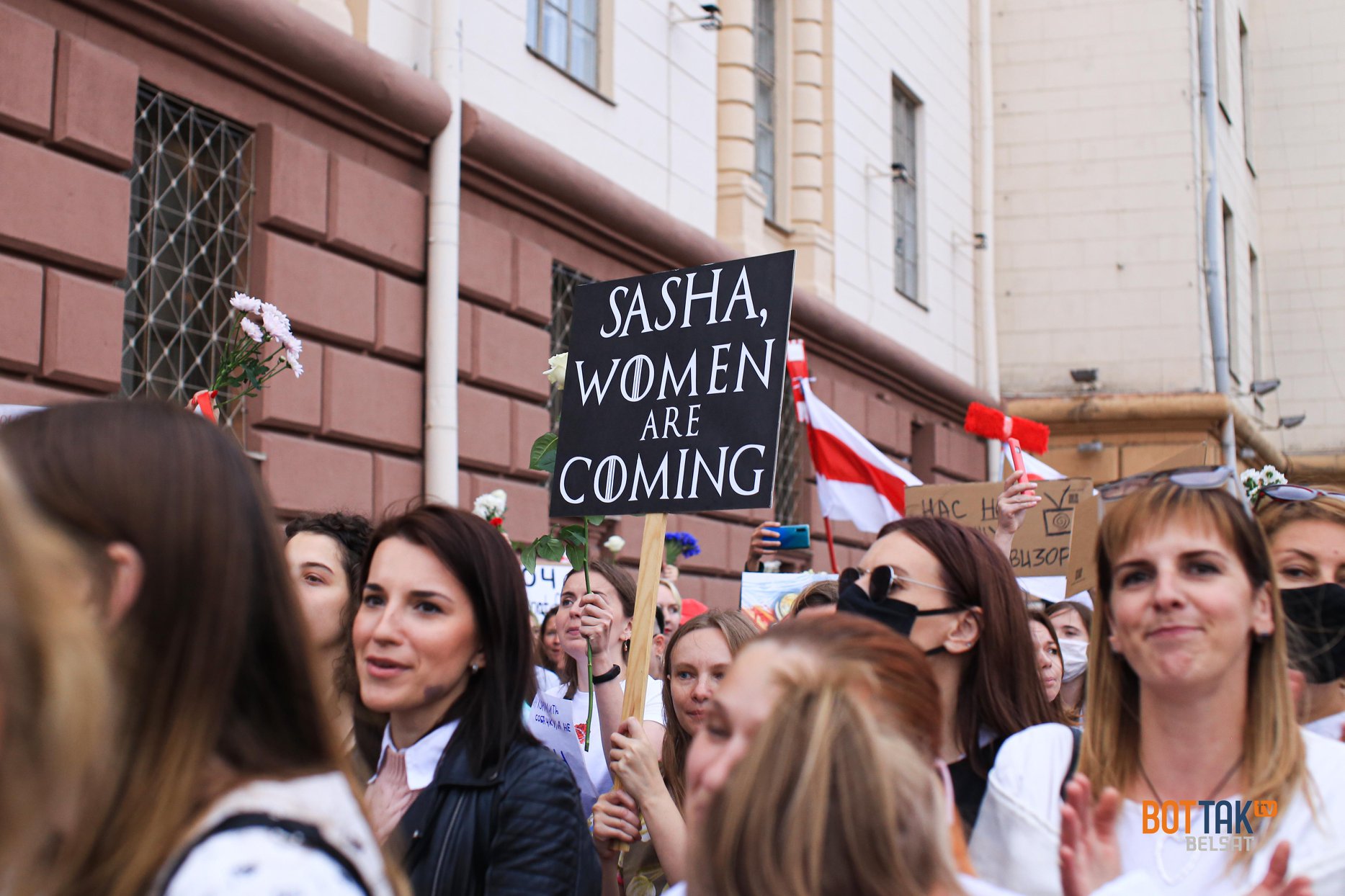 Freedom from command and control

The government TV is repeating the quote by Lukashenko that most of the protestors are drug addicts, alcoholics, and prostitutes. In their picture of the world, anyone who has a different opinion is a pervert and betrayer. Everything irregular, unusual or alternative should be punished and destroyed. For example, yesterday they arrested a man in a panda costume walking alone in Minsk. Protesters, on the contrary, demonstrate an unseen level of creativity and freedom. Traditionally, Belarusians are considered to be conservative, reserved, not emotional. The pictures below demonstrate how different the same people might behave when the constraints are removed and the freedom is given. So many times last month I’ve heard, “I am proud to be Belarusian” – something really unbelievable in this country before. 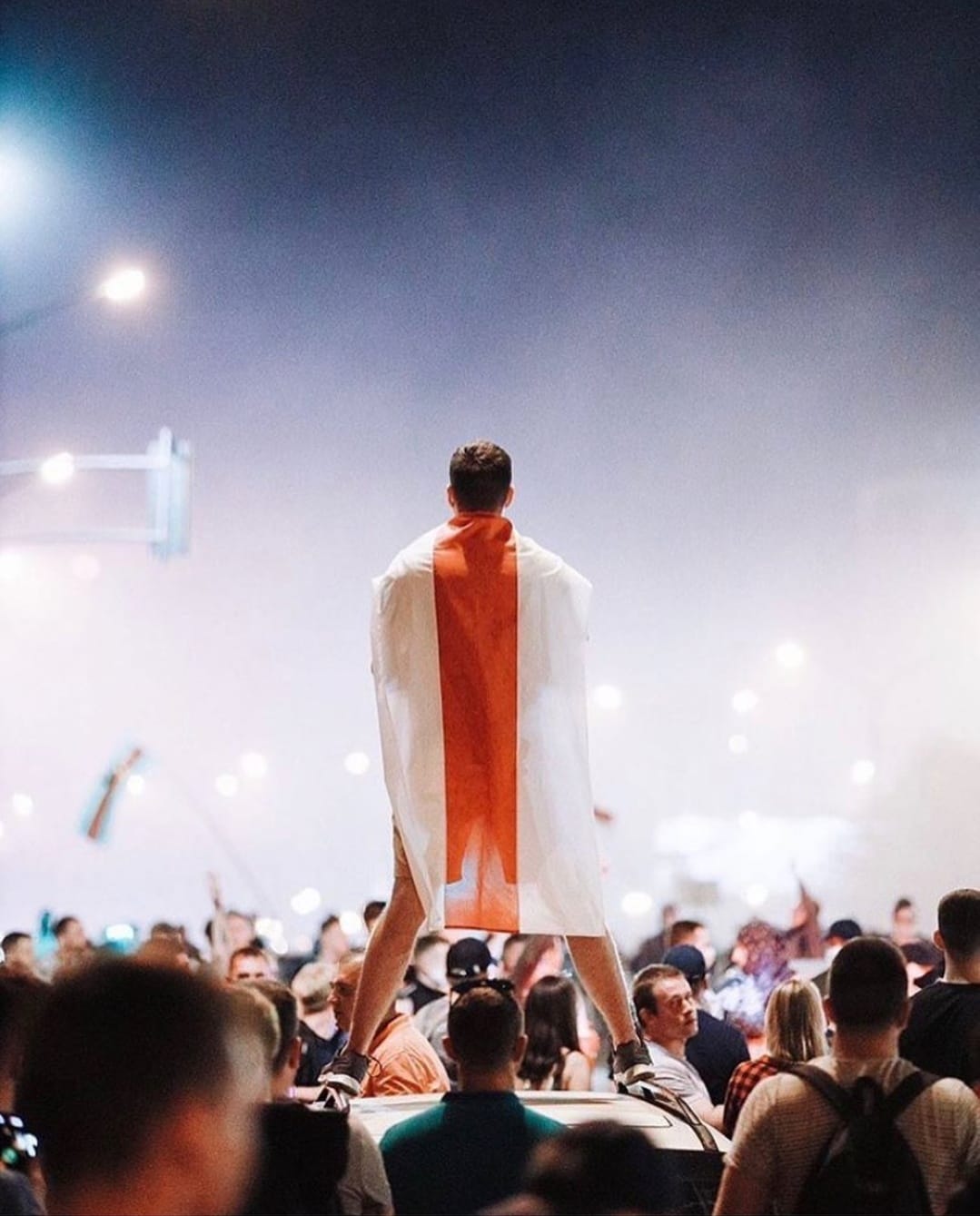 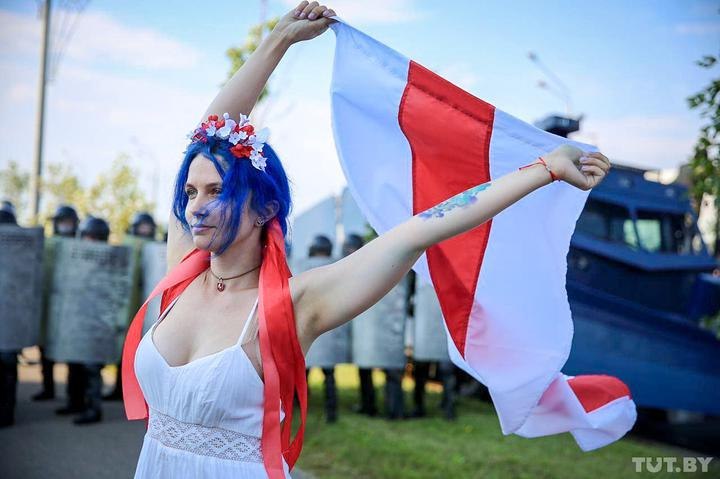 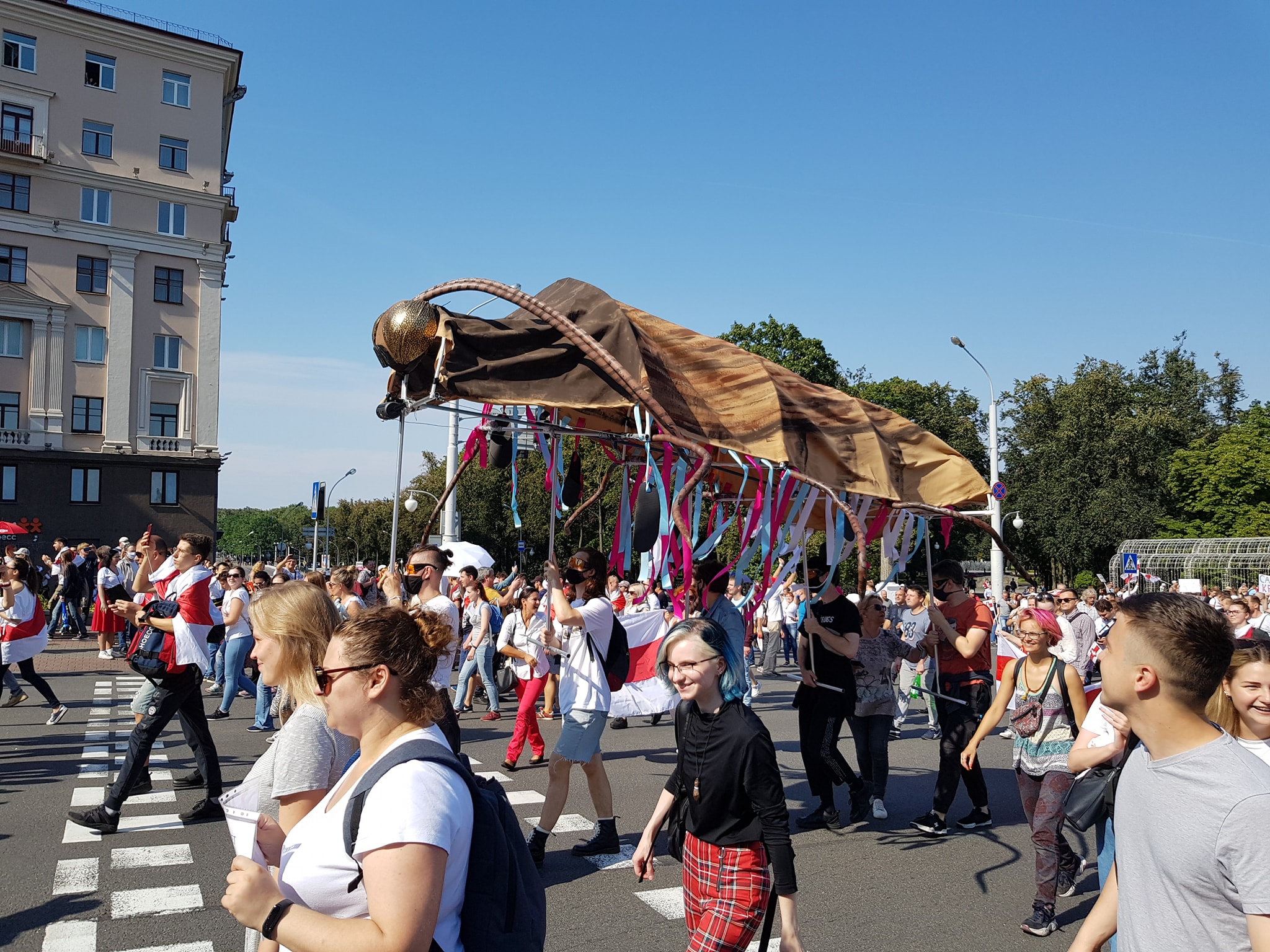 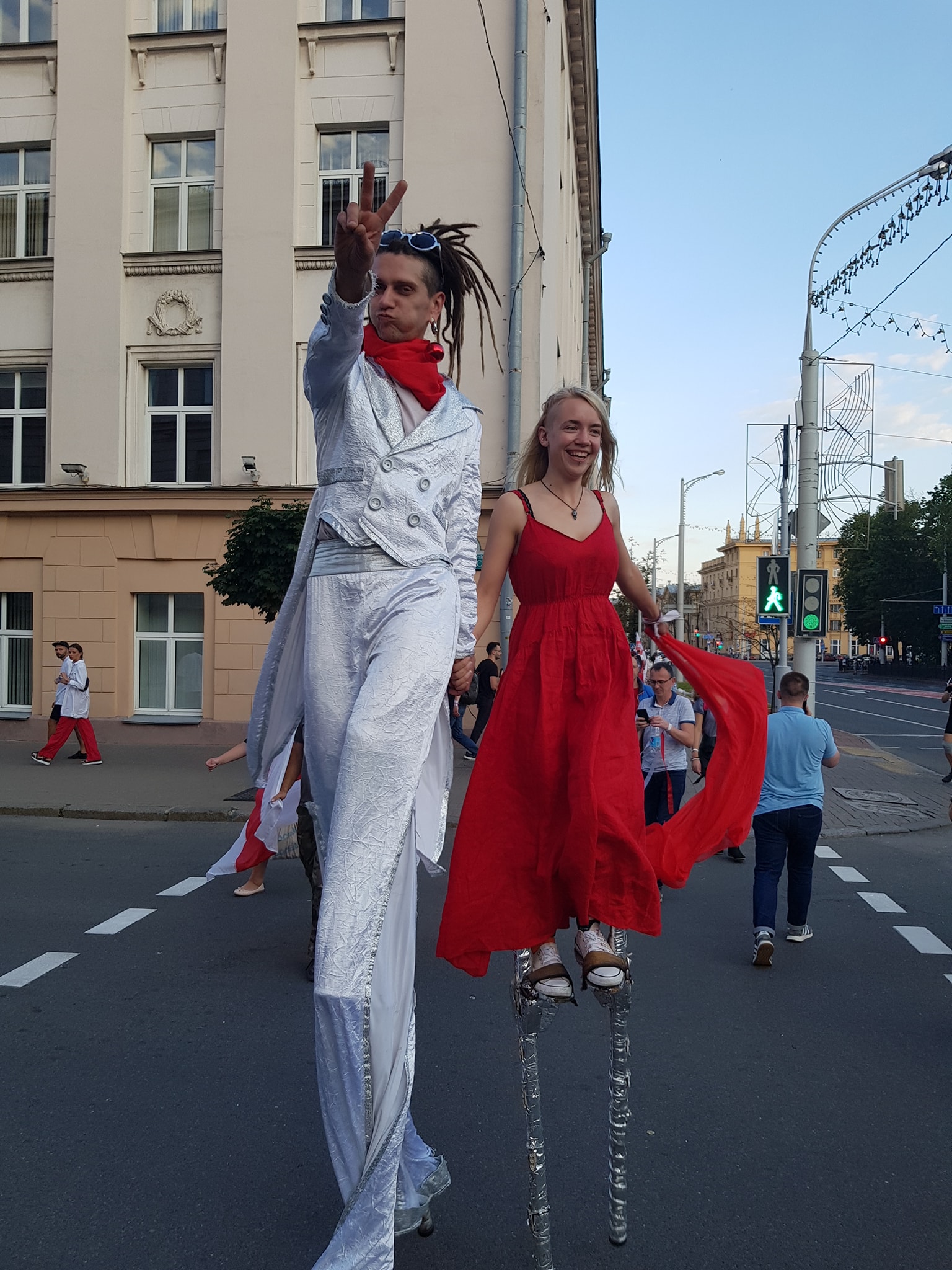 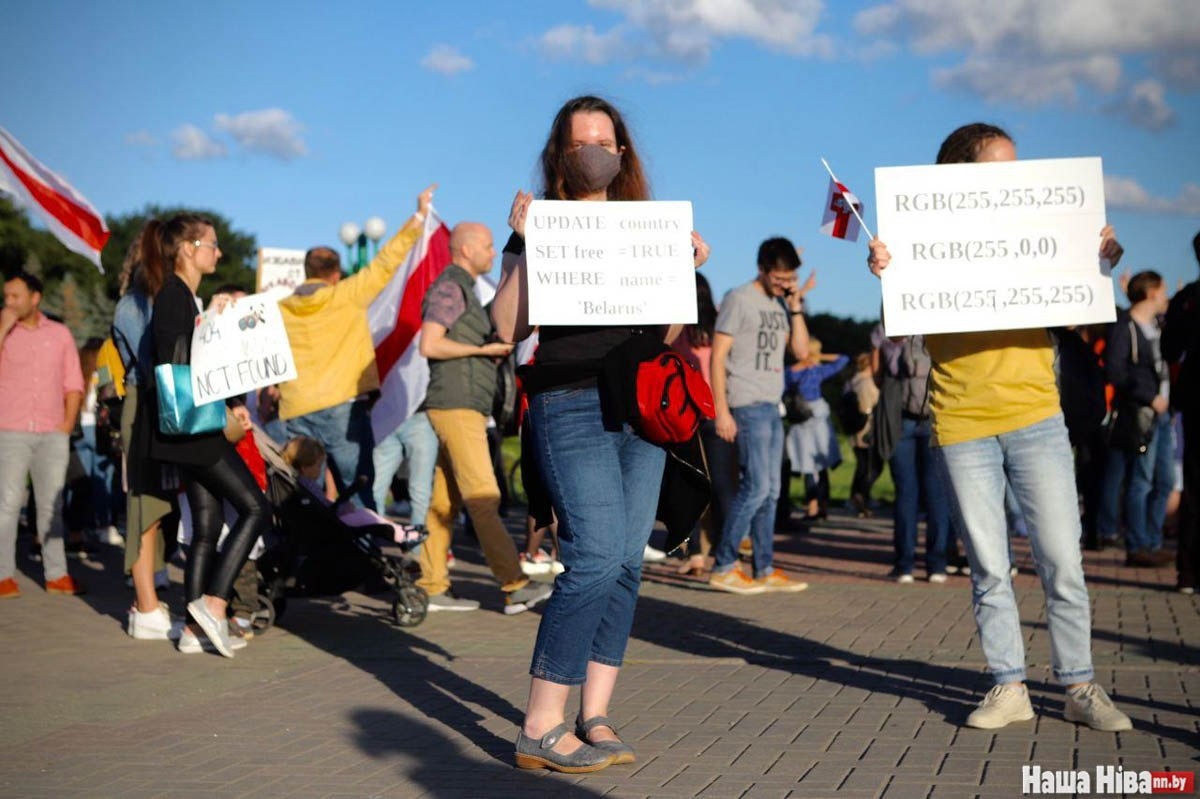 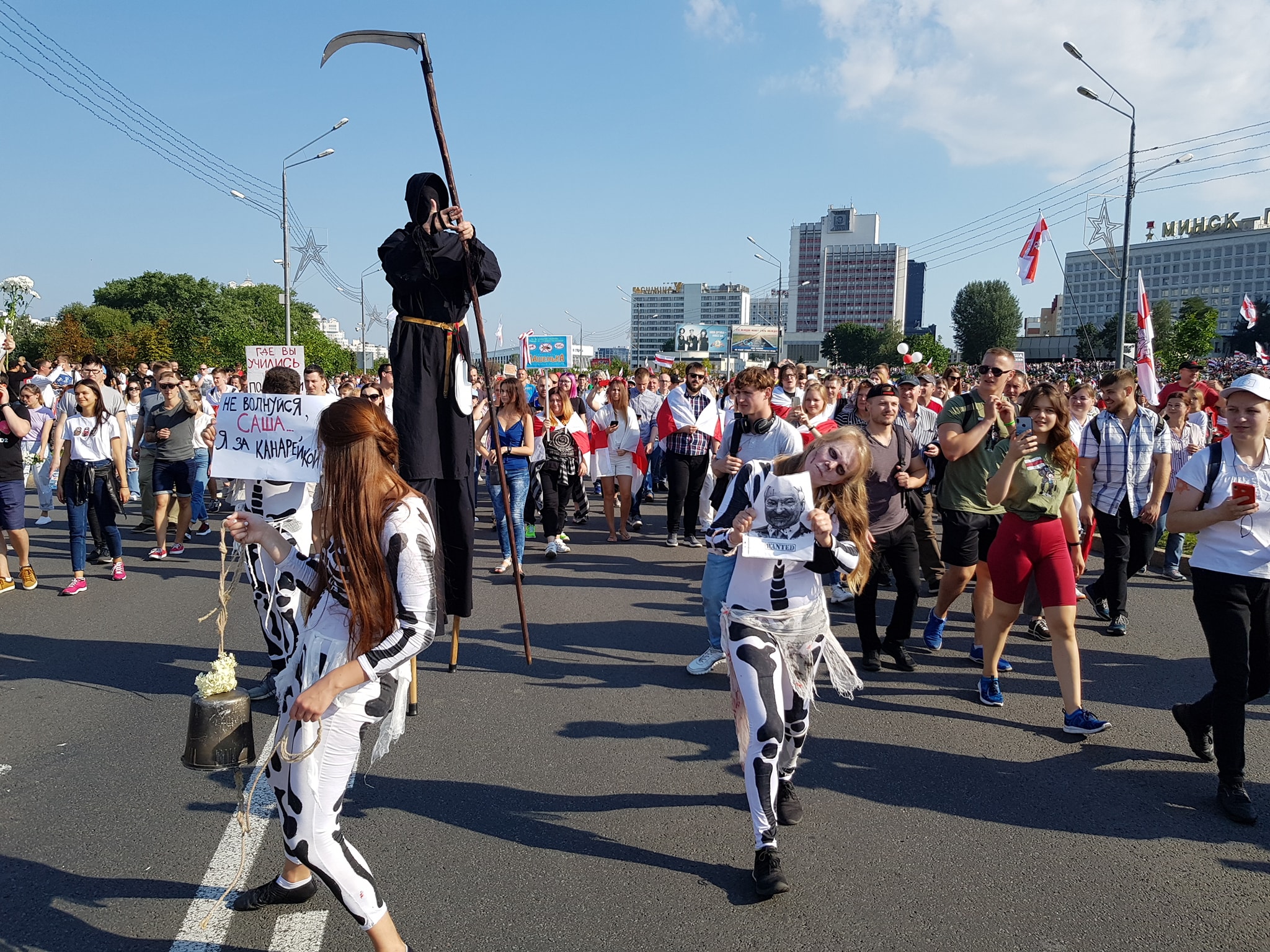 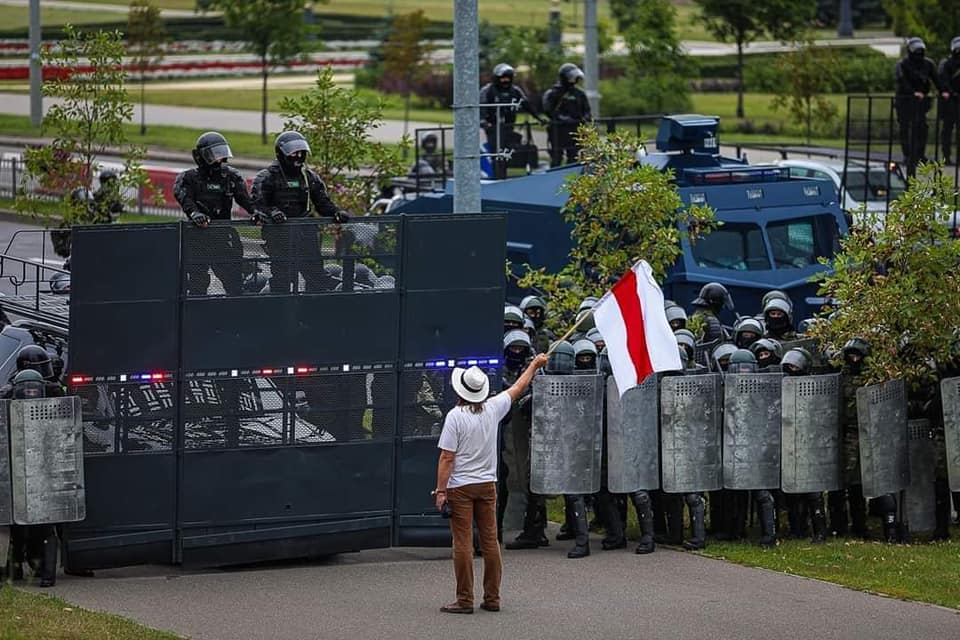 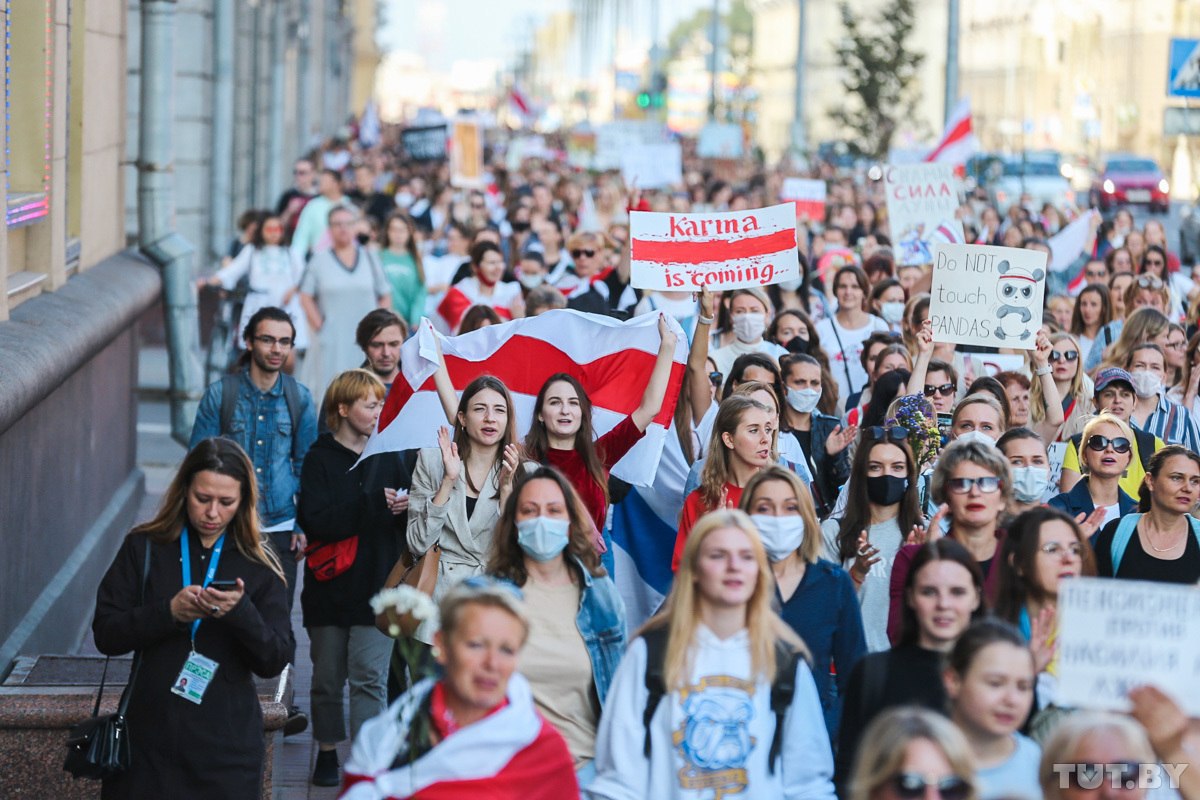 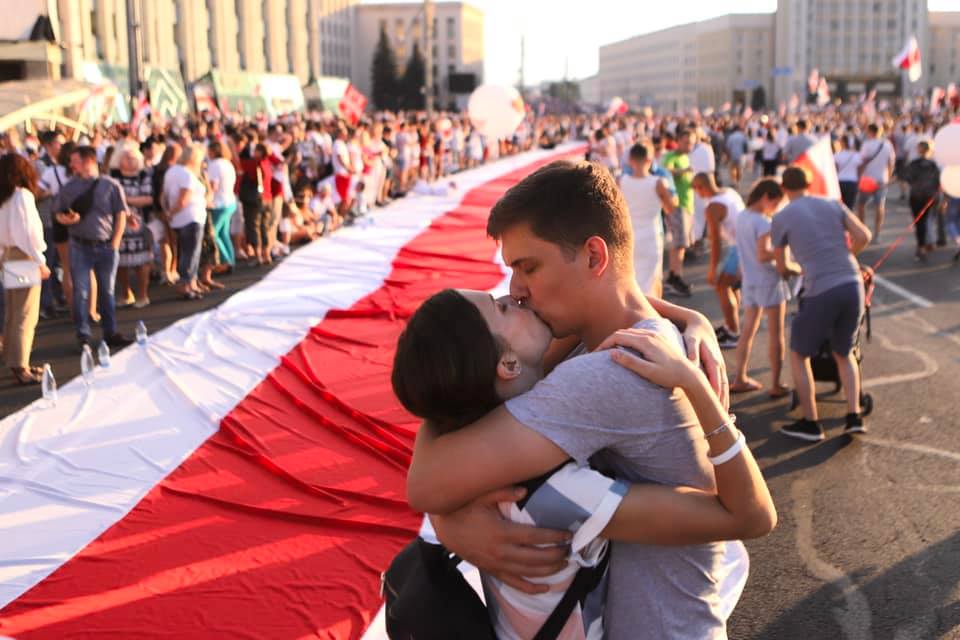 People in Belarus fight the dictatorial regime that purposefully removes all protest leaders. Under these circumstances, though, self-organization strives. Having a common bigger goal people invent various kinds of protests and demonstrate unprecedented creativity and courage. As a part of their self-organizing protest, they built a strong identity – the population became a nation. As a huge self-organizing team, they fight against one of the most bloody regimes. Your awareness, solidarity, support, petitions, spreading the word might help to save someones life in Belarus.