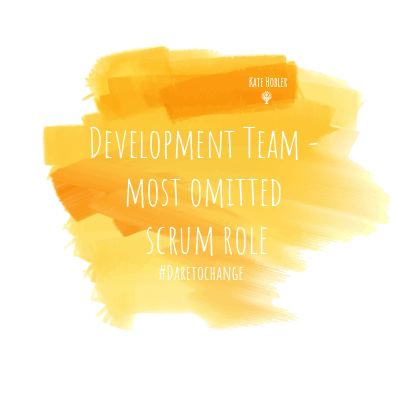 You might have already read about an exercise I am performing in every Scrum class I hold - I ask participants to list Roles, Artifacts and Events in Scrum. Each of those categories has the most omitted element. Lets's take a look at the most omitted role:

Instead of the Development Team you can find (in order of frequency of appearance):

Why participants (even in advanced classes) tend to omit or make mistakes in this role? There are is one main reason for that.

Development Teams are in fact omitted in their companies.

Creating, sustaining and caring for a Development Team takes effort and costs money. It requires a career path that will lead to a uniform team with no roles. It requires understanding what a Developer in Scrum is. It requires Scrum Masters or other servant leaders who will create an environment for them. It requires knowing practical aspects of one's national and organizational culture. It requires trust and courage to give freedom to self-organize. And it requires many other things for the context of your organization.

A simple development team needs all this?

Long answer - let's look at all those prerequisites.

A career path that will lead to a uniform team with no roles.

In the vast majority of companies, teams consist of: developers, testers, business analysts, UX specialists, graphical designers etc. They have juniors, mids, seniors, consultants, architects and ultimate know-it-alls. Team members have different managers. Every division in a team makes it divergent and creates internal barriers that require work to overcome (and sometimes are persistent).

Career paths that enable all members of the Development Team have the same work title, same manager and will be treated the same are rare. But when they exist, creating Development Teams becomes much easier.

I have seen some ideas on how to create career paths that help form  Development Teams:

Understanding what a Developer in Scrum is.

Scrum Masters or other servant leaders who will create an environment for them.

Each country, city and company is different. You have to be aware on how the culture you work with impacts development. I once worked with a company that had its office in a city, that has long and winding history. It created a lot of  cultural divisions:

I tried working with teams there, but there were always some problems, divisions and politics. I didn't know about all of those differences and tried using methods that worked in other companies and cities. After a year of failing someone told me about the community divisions. Once I learned about it, it became obvious, that teams should be structured in a different way. So we started working towards building teams, taking those limitations into consideration. It became much easier (although still challenging).

Trust and courage to give freedom to self-organize.

Self-organization can be scary. So scary, many fail to give teams enough room to do so. It requires courage to let go of control and start trusting people. Give them a goal and help achieve it without micromanagement. Interestingly, it requires trust and courage from the team as well - trust, that their management will continue supporting instead of micromanaging, and they have to have courage in being left with decisions - and their consequences.