While the initial meetups went smoothly, the last two meetups felt rushed given that we usually have about two hours. Also, the changing composition of the meetup attendees has become more challenging; less than 10 percent of the approximately 150 participants so far have attended meetups.

So, I thought it might be a worthwhile experiment to aggregate the previous meetups into a one-day immersive workshop on Liberating Structures for Scrum, built around climate change and MegaBrain.io, a struggling startup with little runway left and in desperate need of two successful Sprints. We ran that workshop last week, and this is what we learned. 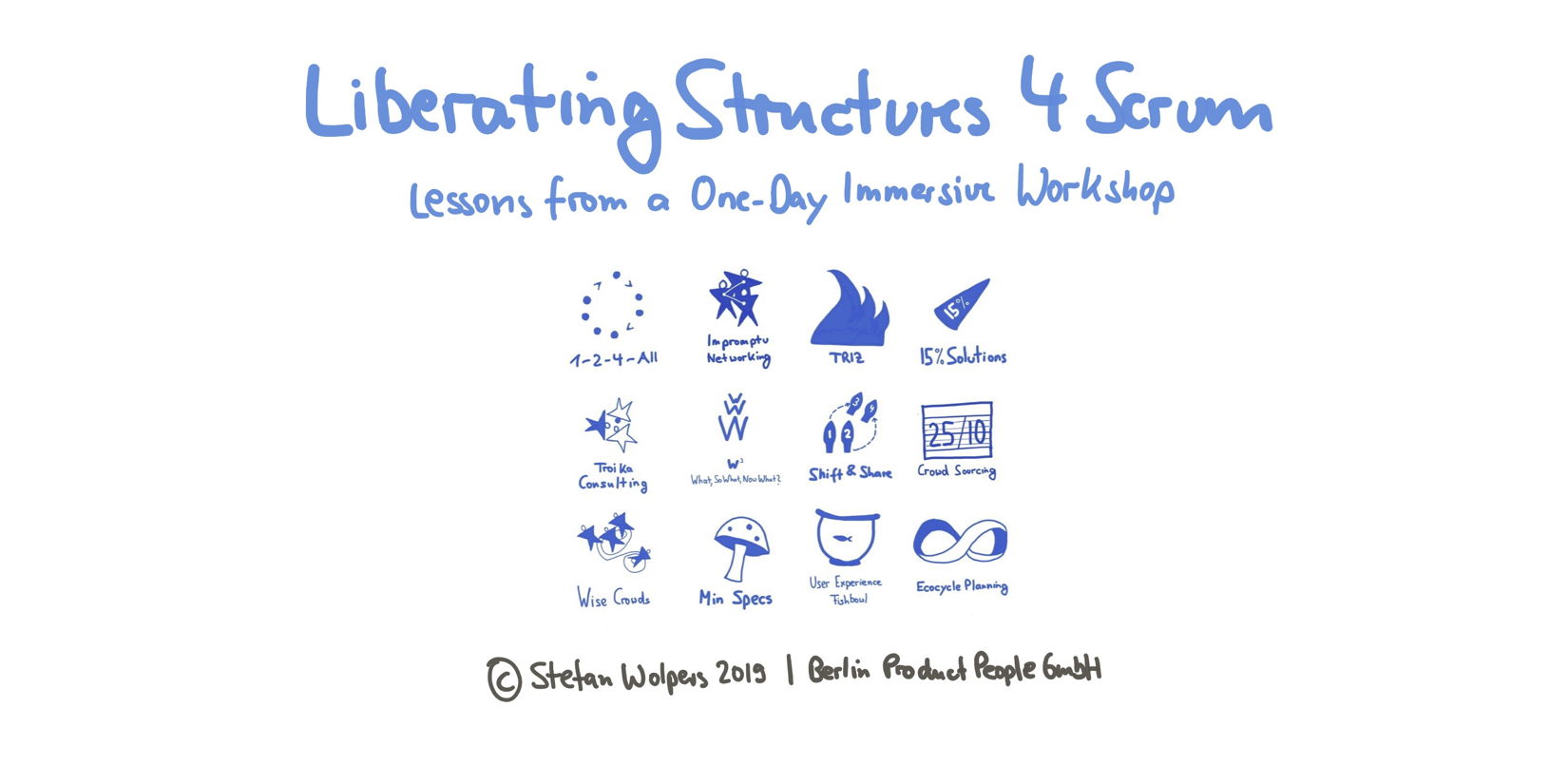 Update: Join us for the follow-up workshop on September 7th, 2019, in Berlin.

Concept of the Immersive Workshop

The Liberating Structures Workshop for Scrum — From Daily Scrum to Sprint Review took place on July 6th, 2019, at the Alte Kantine Wedding, an ample converted industrial space in Berlin. All in all, 30 people attended the workshop, which was scheduled from 9:00 am to 5:30 pm. I estimate the net time available for the workshop to be around 6.5 hours.

I designed the workshop as an analog experience: no electronic devices were needed, just paper, stickies, and markers — a 32-pages workbook provided to each attendee all information for the exercises. This journal also provided an opportunity to take notes, make sketches, and record observations and feelings — thus creating a bond between the attendee and Liberating Structures as a concept. The workbook lists twelve LS microstructures ordered according to the LS Menu. However, we used them in different flow during the workshop.

Working through a set of LS microstructures is straight forward when everyone belongs to the same organization as all then have a shared understanding of the culture and issues at hands. In our case, that was a challenge given that the attendees belonged to at least 25 different organizations. At the Hands-on Agile meetups before, we tried as a common theme everyone can relate to Berlin’s public transport system. It worked reasonably well; however, the topic does not leave much room for the decisions of an individual.

Therefore, I tried a different topic for the workshop that is less abstract and has a much more personal component: climate change. Two days before the workshop, I asked participants to brush up their knowledge on the topic, providing some links to relevant sites:

The workshop started with a string of exercises based on different LS microstructures, partly nesting them, and ended with two exercises building on top of the MegaBrain.io scenario — a struggling startup undertaking a last ditch effort to secure another funding round. At least that was the initial plan. It turned out that we had to skip more LS microstructure than the two anticipated, and that we could only deliver on one of the two exercises.

The next part of the Liberating Structures immersive workshop comprised of the two MegaBrain-io exercises. This is the scenario:

Initially, the group was tasked with two exercises:

Your first task is to suggest a Sprint Review format that ensures that the three Scrum Teams can go into the upcoming Sprint with the best possible Product Backlog.

Start as individuals, then form four small groups of approximately equal size. Use Shift & Share with the whole group at the end to present each small group’s finding.

Your second task is to suggest a Retrospective format with an extended circle of attendees to ensure that MegaBrain.io will not waste the two critical upcoming Sprints.

Given the all-hands-to-deck situation, the Retrospective shall include the Scrum Team members, the Product and Engineering leads, the key stakeholders as well as the two founders.

Start as individuals, then form four small groups of approximately equal size. Use Shift & Share with the whole group at the end to present each small group’s finding.

However, the group favored an extended discussion of the proposed Sprint Review approaches instead of running the second exercise. So, we skipped the Sprint Retrospective exercises and finished in time.

The workshop turned out to be an inspiring experience despite being a bit bumpy here and there — it was the first I ran this workshop concept. Six attendees have so far provided feedback, mentioning that the schedule was too ambitious for one day, that timeboxing needs to be rigorously enforced, that different experience levels need to be addressed, and that weaving LS strings should start earlier. Nevertheless, the NPS of the experiment is 83 at the moment.

What changes are planned? The next iteration will look as follows: