My Route to Becoming a Professional Scrum Master 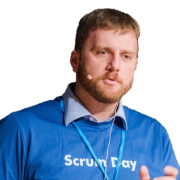 My name is Peter Götz. I am an experienced software engineer. I started in 2001 and have worked in several projects and with several teams since then. Besides actually developing software I have also prepared and conducted several technical trainings (Java, JBoss, OOAD) for developers. For more than eight years now I have been active in Scrum projects. My journey in Scrum has been an exciting one.

My journey in Scrum started in 2007 when I joined a distributed Scrum Team as a Java developer. I immediately loved the transparency and direct contact with everybody on the team who was involved in creating the system. Fascinated by this aspect I took a special interest in what our Scrum Master did and - after some time and projects - I myself became Scrum Master for a small Scrum Team. I read the books and blogs ‘you should read’, I discussed my issues and solutions with fellow Scrum Masters and I felt I was improving in my new role over time. But I have never forgotten my roots and was as near to the Development Team as I could get.
Finally, in 2011, I applied to become a Professional Scrum Trainer for the Professional Scrum Developer Training at scrum.org. I met the preliminary requirements, my application was approved and after I attended a Train the Trainer course for the PSD I got my license by the end of 2012.
I then took on a project to support an Indian Development Team for an insurance company as a Scrum Master. I had never worked with colleagues from outside of Europe and was skeptical, although very interested in how we could make Scrum work in that context. The Product Owner was in Germany as well as the major stakeholders and myself as Scrum Master ('technical lead' in the wording of my customer). When I joined the project, it had already been going on for about a year and the German part of the team had started recently expressing their difficulty in overcoming the language and cultural barrier. Furthermore, the impression had taken root that the Indian colleagues were not able to make proper technical and design-related decisions and had to be told each and every step. It explains why in my first briefing the project manager told me I had been selected not only for my experience with Scrum, but also because I knew the technical background (Java EE) of the project. In their opinion I was a perfect fit for being able to also steer the Development Team in India!
During the first months in the project I was able to support the rest of the German Scrum Team with my experience. The Indian colleagues indeed seemed to need a lot of guidance on how to solve problems, which decisions to take and how to implement them. Most of the time I was discussing the WHAT with our Product Owner, figuring out the HOW by myself and then informing the Development Team to implement it. I would review the actual implementation and - if everything was fine - we would push the functionality to our Product Owner for further inspection and sign-off. This happened on top of my other Scrum Master duties like organizing and facilitating meetings. The project really was a full time job, and probably even more. However, I also gained lots of experience and liked the work.

In 2013 I decided to extend my trainer license with scrum.org with the Professional Scrum Master course. In the meantime I had several years of experience with Scrum in the roles of Developer and Scrum Master, had worked in several different projects and had even gained in-depth experience with a distributed Scrum in an Off-Shoring scenario. What could go wrong, right? So I applied, I met a number of preliminary requirements and got a ‘go’ to proceed. All I needed to do was sit a Train the Trainer course with Gunther Verheyen, the director of the professional series at scrum.org and finish the PSM II assessment with more than 95%. A piece of cake!
I took the PSM course with Gunther in November 2013 in Brussels and this is where my self-perception as a Scrum Master changed - heavily. The course was great, Gunther made everything seem so obvious and easy and my fellow trainer candidates gave much valuable input to me. But what really shook me was when, in day two of the course, Gunther checked why I was being so pushy and directive as a Scrum Master. He asked me if this was how I thought a Scrum Master should be and if a person like that would be able to optimally support the Scrum Team’s self-organization. I was a bit puzzled, because - after all - my implementations with Scrum had been quite successful.
On my way back to Munich and in the following weeks I thought about this, re-read my books and blogs and realized that I was not being a Scrum Master, but a technical lead indeed. I was not helping the Development Team in finding their own way, I was guiding them on my way instead. And that was why they were not taking on responsibility themselves, but instead were doing what they were told: Command and Control!

By the beginning of 2014 I decided to change my approach, radically. I had visited the Agile Coaching Stance training by the Agile Coaching Institute the year before and had learned the basics of being a coach - active listening, powerful questions, letting the coachees figure out the solutions by themselves. Additionally, inspired by the PSM class I attended this is what I started doing, without hesitation and leaving no room for doubt:


At first slowly, but then with increasing momentum, the Development Team took on responsibility - they challenged decisions I had made before, they discussed the contents of the Product Backlog to understand the business needs behind it with the Product Owner, they debated amongst themselves on how to best implement a feature and how to refactor the existing code base in order to improve the overall system. They did not wait for me to point out Sonar violations (on source code quality) but just fixed them as they appeared, spontaneously and autonomously. After only three months I was merely facilitating the meetings and making sure that Scrum was understood and implemented properly.
But that was only the beginning. The real change was soon to start. The Development Team in India asked if they could also select and provide the Scrum Master themselves. Since the majority of the Scrum Team was located in India, they preferred the Scrum Master to be there as well in order to have the support and facilitation on their side. The management in Germany agreed (of course, the main reason for Off-Shoring being cost-reduction) and suddenly I was out of business. It was my best moment in the whole project!
I am still in contact with some of the developers privately and am pleased to hear they are still making progress. Of course there are difficulties, but all in all everybody in the Development Team plus the Scrum Master really enjoy their work.
I resigned from my employer, went for self-employment and seized the opportunity to move to other projects. I am currently working as a part-time developer for one team and part-time Scrum Coach in a Scrum transformation for another. In the meantime I have met the preconditions to expand my license to PSM and will start teaching PSM classes in the beginning of next year. The simple observation by Gunther in that class in November 2013 triggered the biggest change in my professional career so far although it came as a total surprise. I am really curious what the next Big Bang will be for me.