Planning an Adoption With Scrum Patterns

How to start an Agile transformation? What are the initial steps? In this article I explain how transformations could be planned using Scrum Patterns and systems thinking.

Any collaboration with an enterprise starts with an immersion in organizational context using Gemba Walks and Go See approach. Observing how teams work, collaborate and conduct their regular events is crucial in understanding patterns of behavior that exist in organization. Why is that important? System structures reside behind the patterns of behavior and they are the main focus of Scrum Master intervention. Go See results are usually collected in a report that includes observations, description of the discovered system structures, and recommendations.

Take a look at the excerpt from one of the Go See reports:

The product group consists of 16 Scrum teams. They are component teams made narrow specialists who work in “their” components. There are 16 “Product Backlogs” and 16 “Product Owners”. Customer features usually involve a large number of components. Work at the product level is not evenly distributed across all teams, so some of them are overloaded, while others are forced to make themselves busy with less important work. Features are eventually delivered to the market in 5-10 Sprints. Features usually span over multiple Sprints due to dependencies between teams.

How to start a transformation if the final goal is creating an adaptive organization?

Before answering the question, let's get back to the basics of systems thinking.

Car as a System

A car is a deterministic system consisting of three parts: a body, a chassis, and an engine. If we look at the chassis gear then it, in turn, includes smaller systems: a frame, suspensions, axles and wheels. 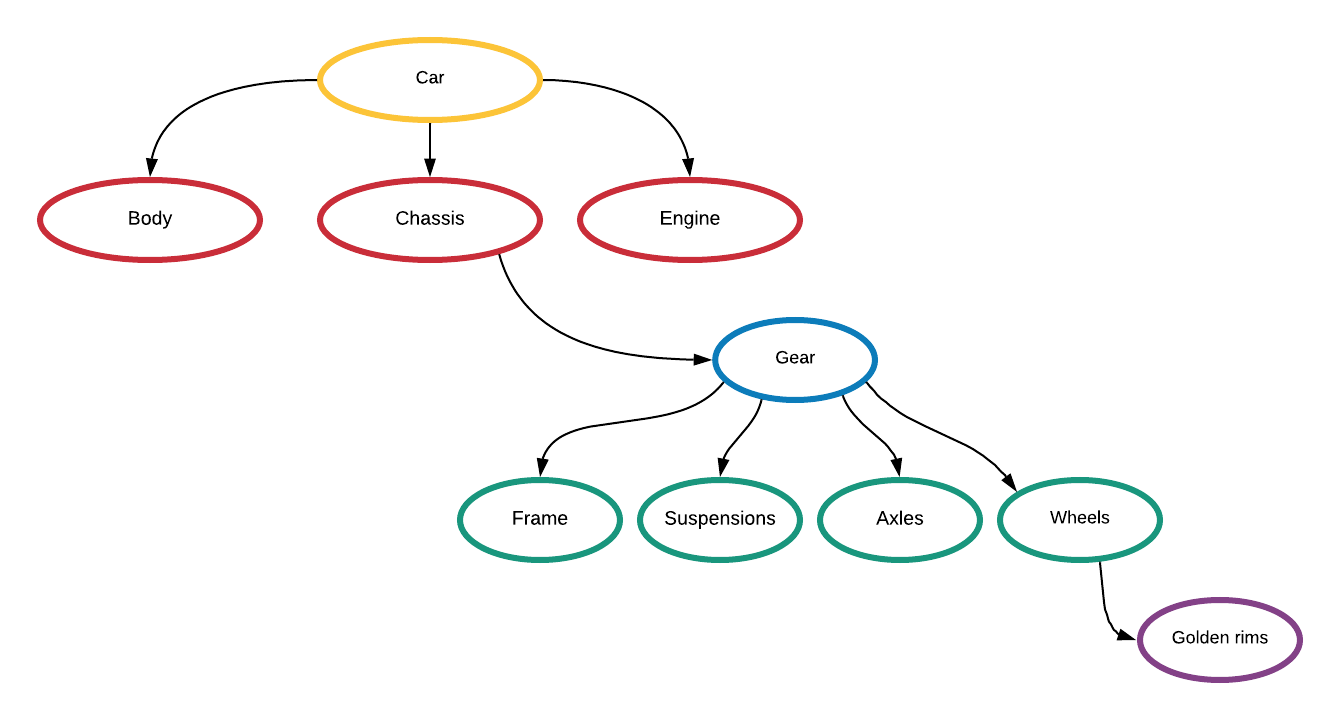 Larger systems contain smaller ones and cannot function properly without them. It can be said that smaller systems “improve” or “refine” the larger systems that they are part of.

In order for the minimum version of the car (MVP) to move and fulfill its functions, the interaction of the body, chassis and engine is necessary. You can refine the car with the golden rims, but this will be a less important improvement from systems thinking perspective. Without an engine, the car will not budge.

Scrum as a “Product Organization” And a “Value Stream” 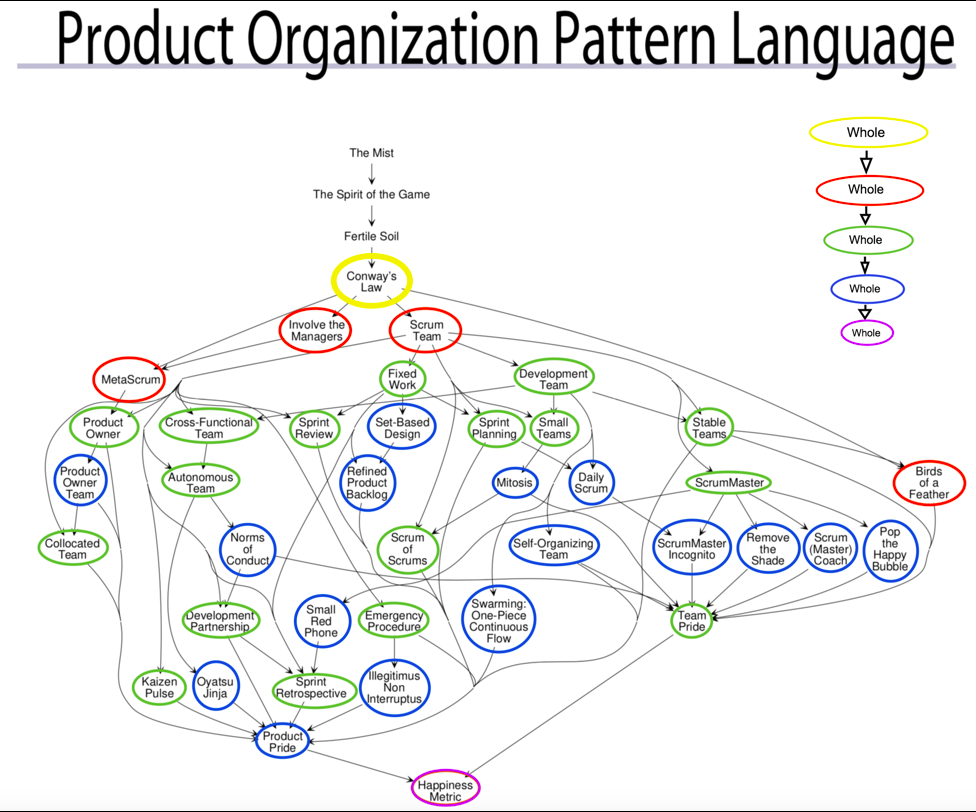 Picture from “A Scrum Book”

The second “whole” is the value stream that structures time. For example, Product Backlog and Product Backlog Items are patterns that are commonly used in order to achieve a product Vision. 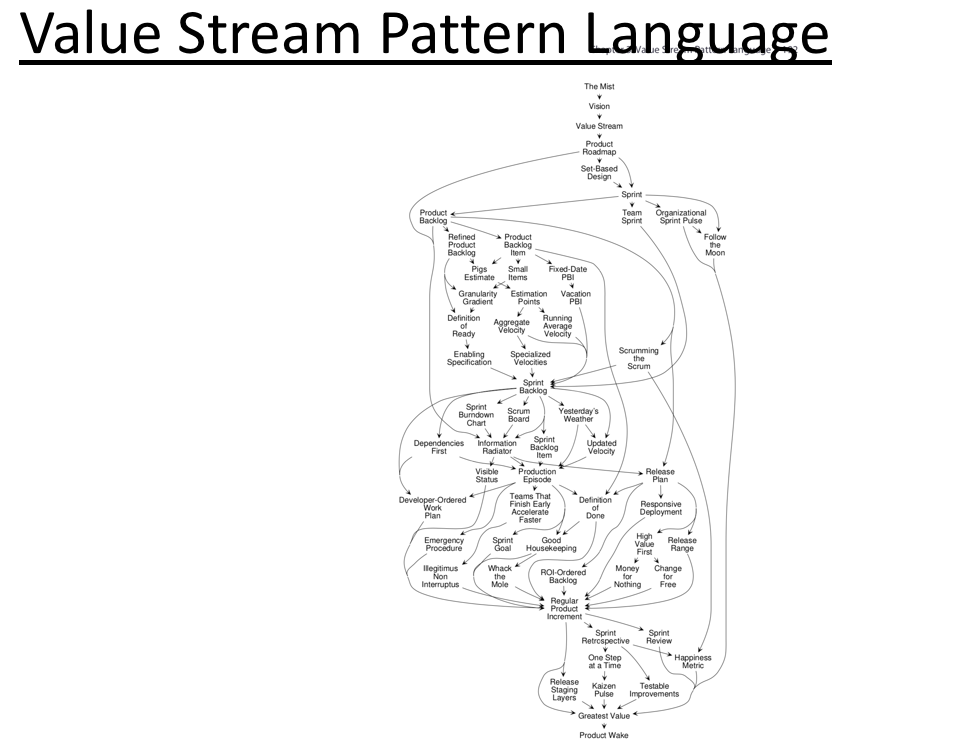 Picture from “A Scrum Book”

Both systems are highly dependent on each other. In practice, it is worth simultaneously build both “wholes” to maximize the benefits of Scrum. Two forms of Scrum, as in the case of a machine, form a system of nested patterns. They visualize the relationships between patterns and suggest the order in which they should be applied.

The general principle is refining larger system first and focusing on the smaller ones later.

The product organization language starts with four sequential patterns: The Mist, The Spirit of the Game, Fertile Soil and Conway’s Law. Then it diverges into parallel nodes (patterns): MetaScrum, Involve the Managers, Scrum Team, Birds of a Feather. 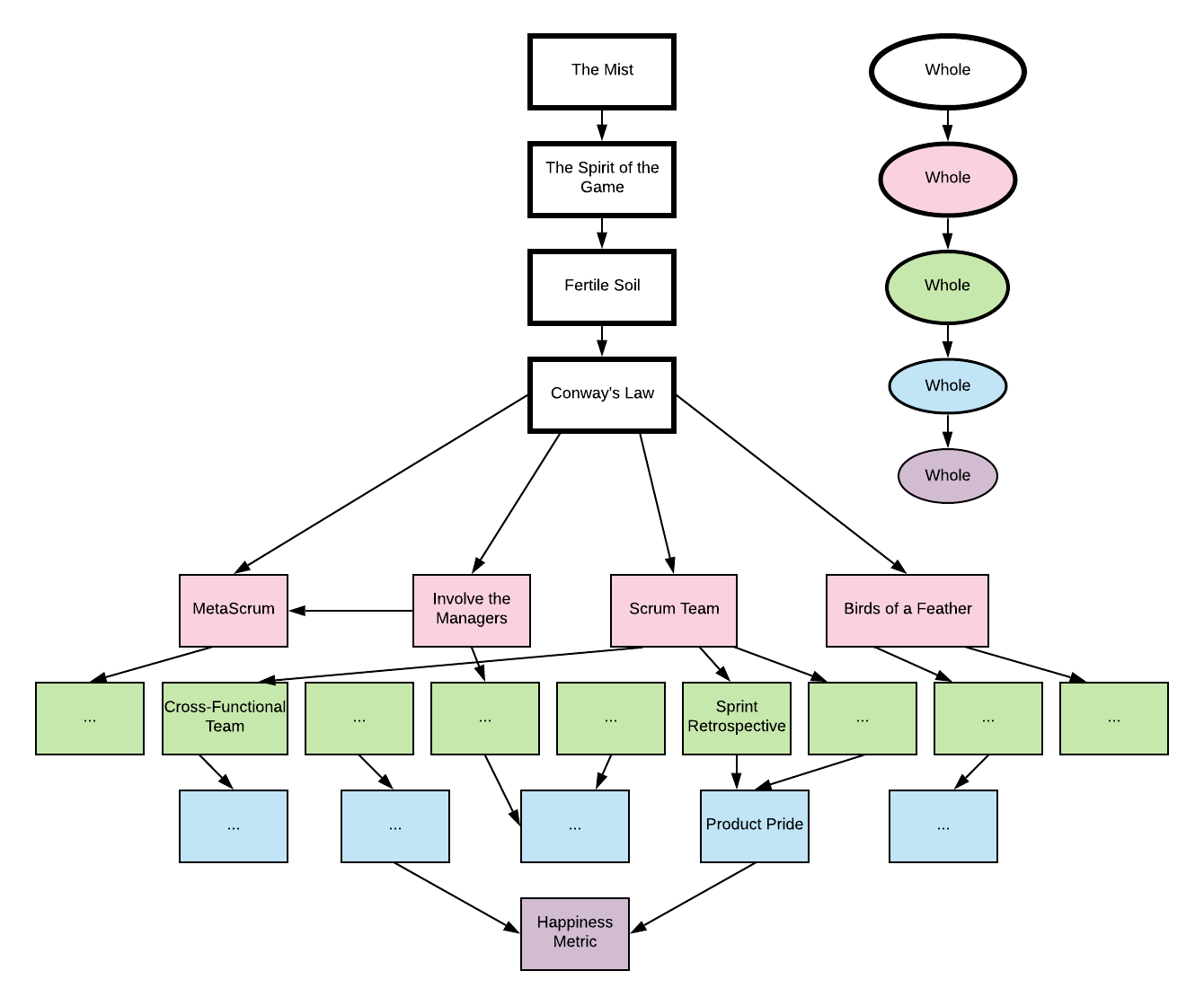 If you look at the product organization language you may notice that it incorporates five levels of nested patterns, if we count from the Conway’s Law level. Each pattern is a system and is a part of the larger system. Let’s investigate the Happiness Metric metric:

The greatest impact at the product organization level can be achieved when we focus first on improving larger system, and only then improving the smaller ones. Maybe Happiness Metric is not the first pattern to start with when transforming an organization. If you don’t have cross-functional (Cross-Functional Team pattern) Scrum Teams and management support (Involve the Managers pattern) maybe you should focus on something more critical first.

Let's get back to the excerpt from the Go See report. Teams are organized around architectural components, functions, and internal business processes and are so called component teams. This structure and its associated patterns of behavior and trends (dependency management, long release cycles) can be solved by the pattern Conway’s Law, which implies transition to product teams and the creation of an adaptive organization.

What other patterns could be helpful in transition to product teams as Conway’s Law states? Thoroughly investigating the product organization language you could come with the following start-up pattern sequence:

In order to create an adaptive organization you choose the Conway’s Law pattern first. Then it’s critical to get management support and thus you Involve the Managers. After that you create the overall Product Backlog, analyze it and define the Value Areas. Next step could be creating the best possible Cross-Functional Teams и starting up the Birds of a Feather. And this is just the beginning of the transformation journey.

Recently I had a telephone conversation with the managers of one foreign bank. The initial request was to support the launched Scrum Teams and mentor Scrum Masters. The simplest thing that could be done was to negotiate the price and fill up their request. But it would be incorrect and unethical from my side to propose a solution without understanding the underlying issue. An express assessment that followed showed that what managers asked would be a local optimization. Agile transformation in the bank had much more serious challenges. Supporting teams and mentoring Scrum Masters would not be the best possible solution from systems thinking perspective.

The job of the Scrum Master is to propose systemic solutions that solve the fundamental problems of the organization. Avoid local optimizations whenever possible. In order to do this, the Scrum Master relies on the Scrum Values. This is a touch job, but demonstrating courage and openness continuously, the Scrum Master creates the crucial transparency for everyone involved in the transformation. Thus, it becomes the basement for future changes.