After covering the anti-patterns of the Scrum Master, the Product Owner, and the stakeholders, this article addresses Scrum Developer anti-patterns, covering all Scrum Events and the Product Backlog artifact. Continue reading and learn more about what to look out for if you want to support your teammates who build the Increment. 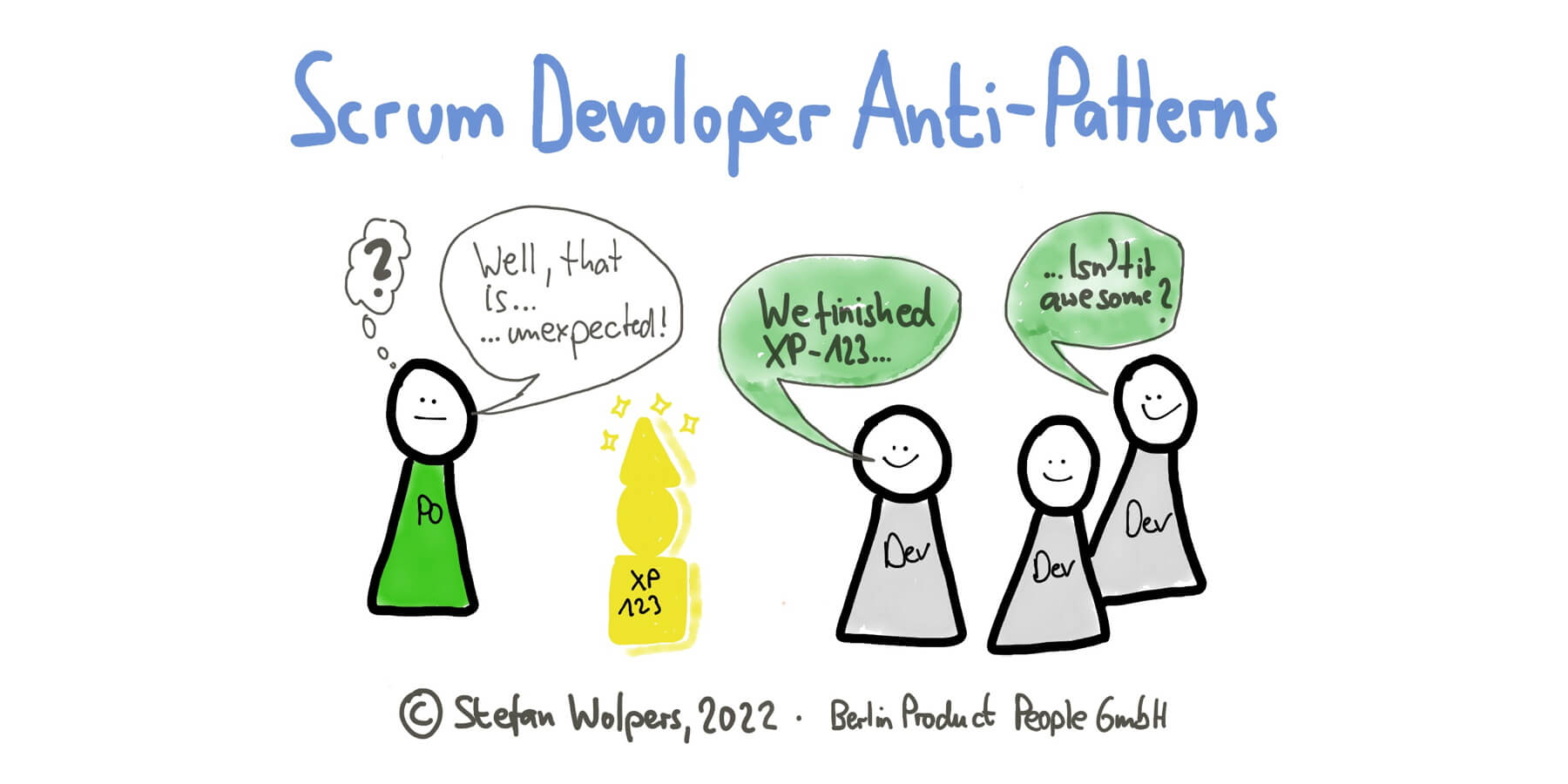 🗞 Shall I notify you about articles like this one? Awesome! You can sign up here for the ‘Food for Agile Thought’ newsletter and join 35,000-plus subscribers.

The Role of the Developers in Scrum

According to the Scrum Guide, the “Developers are the people in the Scrum Team that are committed to creating any aspect of a usable Increment each Sprint:”

Also, Developers enjoy complete autonomy regarding the technical side of their work:

The term “Developer” seems to limit the role to technical people, for example, software engineers. However, in the spirit of the Scrum Guide, the term Developer is much more inclusive. In my experience, given proper support from the Scrum Master and the Product Owner, even lawyers and marketers can get comfortable with this designation when utilizing Scrum.

So, let’s dive into an array of common Scrum Developer anti-patterns that signal Scrum Masters that their teammates need support.

The following list of Developer anti-patterns addresses all four Scrum events plus the Sprint itself:

Most of the following Developer anti-patterns mostly result from a lack of focus or procrastination:

Sprint Planning Anti-Patterns of the Developers

Scrum’s Sprint Planning aims to align the Developers and the Product Owner on what to build next, delivering the highest possible value to customers. Some common Developer anti-patterns are as follows:

The Daily Scrum is an essential event for inspection and adaption, run by the Developers, and guiding it for the next 24 hours on its path to achieving the Sprint Goal. The Daily Scrum is hence the shortest planning horizon in Scrum and thus highly effective to guide the Scrum team’s efforts.

Contrary to popular belief, its 15-minutes timebox is not intended to solve all the issues addressed during the Daily Scrum. It is about creating transparency, thus triggering the inspection. If an adaption of the plan or the Sprint Backlog, for example, is required, the Developers are free to handle the resulting issues at any time. In my experience, most Daily Scrum anti-patterns result from a misunderstanding of this core principle.

Are we still on track to accomplish the Product Goal? Moreover, how did the previous Sprint contribute to our Scrum team’s mission? Answering these questions and adapting the Product Backlog in a collaborative effort of the Scrum Team with internal and external stakeholders is the purpose of the Sprint Review. Some common anti-patterns are:

What event could better embody Scrum’s principle of empiricism than the Sprint Retrospective? I assume all peers agree that even the simplest form of a Retrospective—if only held regularly—is far more helpful than having a fancy one once in a while, not to mention having none. Some notorious Developer anti-patterns include:

Scrum is a tactical framework to build products, provided you identify what is worth making in advance. But even after a successful product discovery phase, you may struggle to create the right thing in the right way if your Product Backlog is not up to the job—garbage in, garbage out. Some forms by which Developers contribute to mediocre team success are:

Given the essential role Developers have to live up to make Scrum successful, it is no surprise that there are plenty of anti-patterns to observe. The good news is, though, that many of those are entirely under the control of the Scrum Team. All it takes to tackle these Developer anti-patterns for the team is starting to inspect and adapt. Why not use your next Retrospective for this purpose?

Which Developer anti-patterns have you observed? Please, share them with us in the comments.

✋ Do Not Miss Out and Learn more about Developer Anti-Patterns — Join the 11,000-plus Strong ‘Hands-on Agile’ Slack Community

I invite you to join the “Hands-on Agile” Slack Community and enjoy the benefits of a fast-growing, vibrant community of agile practitioners from around the world.

If you like to join all you have to do now is provide your credentials via this Google form, and I will sign you up. By the way, it’s free.

The article Scrum Developer Anti-Patterns was first published on Age-of-Product.com. (This is another one for you, Shaun.)