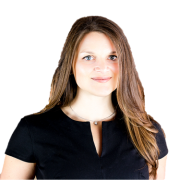 Scrum is often called the art of the possible.

This means we do the best we can with what we know and what we have.

This means we repeatedly take imperfect action in an intentional way.

I believe this also means Scrum is about creating our own luck.

It might seem a little strange to hear a Professional Scrum Trainer talk about luck in product development.  Let me explain how I view luck.

I don’t sit back and hope for the best.  I don’t close my eyes to the facts in front of me and hope they will change.  I don’t blindly follow the path and hope it leads me where I want to go.

That is not luck.

Luck is about being open to the possibilities.

Then you can seize the right possibility when it becomes available.

And if it wasn’t the right one, you can learn and try something new.

Richard Wiseman has done scientific studies on the nature of luck.

Why did the lucky people take considerably less time?

The second page of the newspaper said in huge print, “Stop counting – There are 43 photographs in this newspaper.”   Even though this message took up over half of the page, the unlucky people tended to miss it.  And the lucky people usually saw it.

The unlucky people were so focused on the task and their assumed constraints that they couldn’t see the possibilities.

Wiseman’s conclusion from this and several other studies is that people often create their own good luck or bad luck.

So do the work.  Prepare for what may be next.  Observe what’s happening.  Stay curious.

Expand your range, so you can help yourself and the people you work with be both open to and ready for the possibilities.

Because Scrum is about being open to the possibilities.

Keep in mind that when you are open, this may make others feel uncomfortable.  Because people like certainty and predictability.

Let that discomfort be their thing, not your thing.

Consider where you have seen luck in product development.

Kodak invented the digital camera.  They chose to close their eyes to the possibilities (even to something tangible right in front of them).  The founders of AirBnB were struggling to pay their rent and saw an opportunitiy to rent some air mattresses in their apartment to people visiting San Francisco for a conference.

Think about products you’ve worked with in the past.  How often does the end product look like what you thought it would when the initiative was conceived?  What were the moments when direction quickly shifted because a new opportunity presented itself?

When have you seen an initiative fail to achieve desired business outcomes even though the plan was executed well?  How much autonomy did that team have?  How frequently was the team inspecting and adapting?