Team building has always been a challenge, not just since the advent of agile frameworks and the resulting emphasis on self-organization, engagement, and achieving a valuable objective. This post covers four team building mental models — or concepts — that have proven useful in understanding the context of creating agile teams: from Taylorism to Tuckman to Lencioni to Dan Pink. 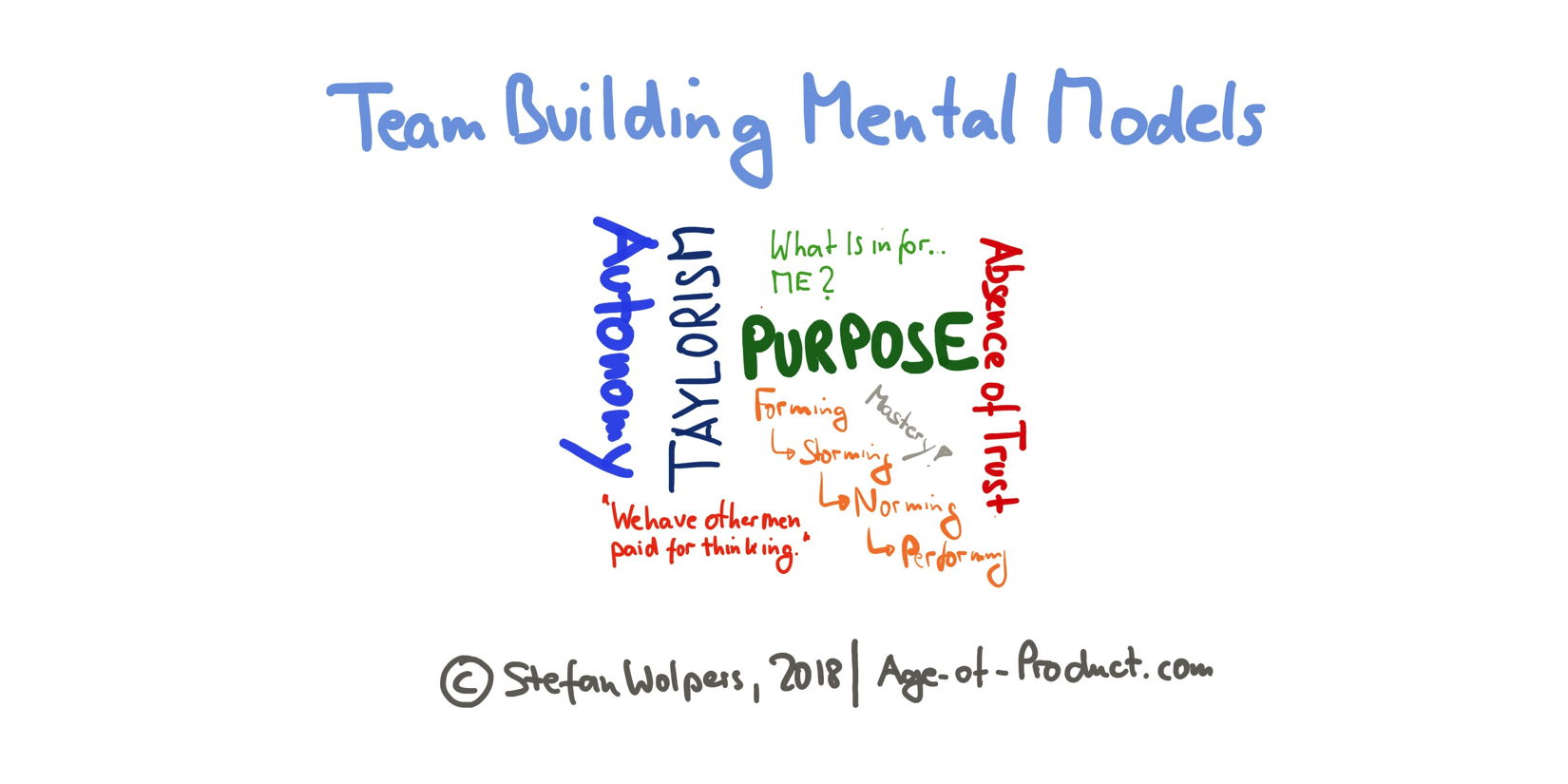 The purpose of becoming agile has always been a means to an end on the business side, for example, learning faster than the competition thus maintaining a competitive edge or being capable of identifying a business opportunity early and then rise to this occasion.

At an operational level, this means overcoming the predictive planning fallacy as it is impossible to cope with complexity with Gantt-style planning. It also requires abandoning the command and control mindset of the industrial paradigm by embracing empiricism and thus the power of self-organized teams, bottom-up intelligence and the creativity of every member of an organization, probably transforming into a team of teams, as McChrystal calls it, along the way.

Team building has always been tricky: from organizing the military to getting farm hands assembling Model T’s to applying new agile frameworks like XP or Scrum.

Moreover, the core question has always been the same: how do you manage to move from an assembly of mere individuals—more or less eager to not step on each other’s toes—to the required level of collaboration in today’s high paced technology-driven economy? How do you manage to create a real team—not just a group of folks that happen to be in the same place at the same time—where the team success supersedes any personal aspirations?

(Got 55 seconds? Watch an outstanding team in action.)

There are dozens of models and concepts that try to explain the team building—or the lack thereof—at a conceptual level. In my experience, the following four team building mental models have proven to be useful in the context of creating a self-organized team in an agile environment.

Frederick Winslow Taylor’s “Scientific Management” model—a theory from the 1880ies based on applying scientific methods to workflow process management mainly in the manufacturing industries—takes a simple approach to team building: at the worker level, team building is not required as workers are no more than interchangeable cogs in the machinery.

The management is paid to analyze issues at hands, be creative in finding solutions to problems, optimize processes and systems, and oversee the execution of their orders by the workers. Managers drive the efficiency of the (industrial) system.

Workers on the other side cannot be trusted to be creative or contribute anything meaningful at the systems-level. Besides, workers are inherently unproductive if not appropriately motivated by financial rewards in the case of wanted behavior and punishment in the fact of unwanted behavior. In the Taylorist mental model, being engaged with an outcome as a worker—thus moving outside the predefined norms—constituted unwelcome and hence punishable conduct. (I am tempted to say “offense.”)

My favorite quotes from Taylor’s work are:

Bruce Tuckman conducted research in small group dynamics. His paper from 1965 on “Developmental Sequence in Small Groups” defined one of his theories that is today mostly known as the Tuckman model or the “Forming, Storming, Norming, Performing” model.

The paper describes four principal stages that every team goes through:

Patrick Lencioni’s book “Five Dysfunctions of a Team” analyzed work team challenges in the format of a business fable and provided a coherent mental model what the reasons for an underperforming work team might be.

He identified five levels building upon each other:

The Absence of Trust:

“In the context of building a team, trust is the confidence among team members that their peers’ intentions are good, and that there are no reasons to be protective or careful around the group. [Trust] requires team members to make themselves vulnerable to one another, and be confident that their respective vulnerabilities will not be used against them.” (Quote: pp 195/196.)

The Fear of Conflicts

“All great relationships, the ones that last over time, require productive conflict in order to grow. Ideological conflict is limited to concepts and ideas, and avoids personality-focused mean-spirited attacks.” (Quote: p 202.)

The Lack of Commitment

“In the context of a team, commitment is a function of two things: clarity and buy-in. Great teams make clear and timely decisions and move forward with complete buy-in from every member of the team, even those who voted against the decision. They understand that reasonable human beings do not need to get their way in order to support a decision, but only need to know that their opinions have been heard and considered. Only when everyone has put their opinions and perspectives on the table can the team confidently commit to a decision knowing that it has tapped into the collective wisdom of the entire group.” (Quote: pp 207/208.)

The Avoidance of Accountability

“In the context of teamwork, however, [accountability] refers specifically to the willingness of team members to call their peers on performance or behavior that might hurt the team. If teammates are not being held accountable for their contributions, they will be more likely to turn their attention to their own needs, and to the advancement of themselves or their department.” (Quote: pp 213/215.)

The Inattention to Results

“Though all human beings have an innate tendency toward self-preservation, a functional team must make the collective results of the group more important to each individual then the individual members’ goals. Success [in team building] is no a matter of mastering subtle, sophisticated theory, but rather embracing common sense with uncommon levels of discipline and persistence.” (Quote: pp 216/220.)

Quotes are from “Five Dysfunctions of a Team.”

Dan Pink’s “Autonomy, Mastery, Purpose” model results from his book “Drive: The Surprising Truth About What Motivates Us.” [Amazon advertising.] His concept is based on three personal motivations in the era of knowledge work:

Pink points at the fact that financial rewards do not work as expected in the knowledge industry. Once you take the question of earning enough for a decent living off the table, autonomy is more appreciated than yet another bonus. (“Management is great when you want compliance. But if you want engagement, self-direction works better.”)

This approach is particularly convincing in combination with providing room for mastery—the urge to get better at what you do—because we like to improve our capabilities. (For example, there is no economic incentive for the vast majority of amateur musicians to practice with their instruments at weekends. Moreover, why would a highly skilled individual invest hours on end to contribute to an open-source software project only to give it away for free at the end?)

Lastly, organizations—for-profit or non-profit—that flourish have managed to preserve the mooring of profits or benefits which the purpose motive. In Dan Pink’s words: Humans are “purpose maximizers.”

Source: Drive: The surprising truth about what motivates us.

None of the team building mental models introduced above will provide a recipe for creating an outstanding agile team. However, all models contribute to a better understanding of the factors that define social dynamics in groups and organizations and motivate human beings to engage in change. We then can take from there, for example, using Liberating Structures to facilitate a meaningful shift to becoming an agile organization.

What team building mental models are you applying in your daily work? Please share with us in the comments.