The Three Virtues of a Great Team Player 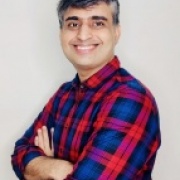 "They are all great team players!"

Great teams are more than just a bunch of smart people. In each of the above three cases, there is something special: a spark, a virtue, or some business environment "juju" that inspired team members to push their limits beyond the comfort zone and create products that redefined their businesses.

So, how can you identify, build, and sustain such great team players?

Patrick Lencioni reveals in his book "The ideal team player" the three indispensable virtues that we will briefly be exploring in the context of the Scrum team. 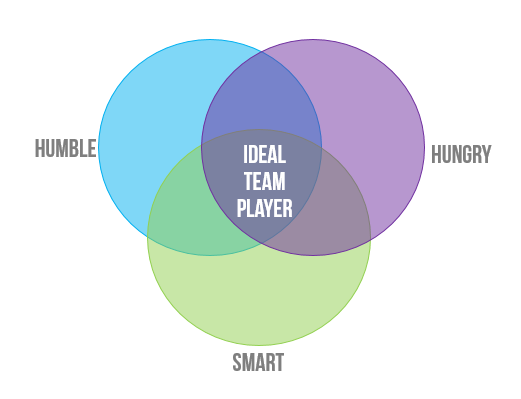 The first virtue of a great team player is hunger. Hungry team members have a strong work ethic, they hate being a slacker. They don't settle for mediocrity and are always looking for more - more learning, more responsibility, more action, and more contribution. Hungry team members engage in uncomfortable conflict and hold others accountable. They go above and beyond to achieve results and are always thinking about the next steps.

Having a squad of hungry members is essential. Being smart isn’t the same as being intelligent! They are good at practicing the Emotional Quotient. In the context of teamwork, smart means having social skills, the ability to get along with people and to work with them efficiently and effectively. Smart team members understand team dynamics and can tactfully engage in productive disagreement. They have good interpersonal awareness and tend to understand how to deal with others in the most effective way.

"Humility is the foundation of all virtues." - Confucious

Great team players are humble individuals. For them, the team’s requirements and goals always come before their own. They don’t bother about their status or ego, instead, they focus on the welfare of the team as a whole. They define success collectively and commit to team goals.

Those who lack all three virtues have very little chance of becoming great team players. Now, with this understanding let's explore six different personas of team members who lack either one or two of these virtues and what it takes to be an ideal team player. 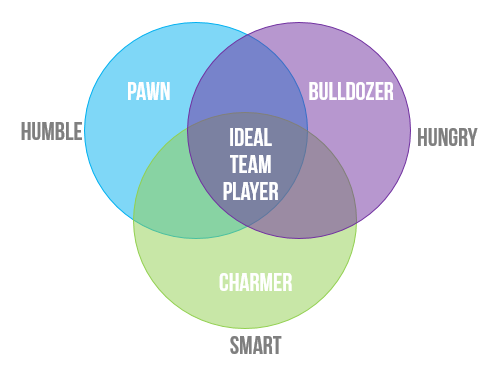 People who are only humble, and not hungry at all or smart are the “pawns” on a team. They are nice, kind-hearted individuals who just don’t have a great desire to get things done and lack the ability to build effective relationships with peers. They often are lone wolves and find great difficulty in creating an impact on the team.

2. Hungry Only – The Bulldozer

Bulldozers are very determined to get things done, but with a focus on their own interests and without realizing how their actions could impact others. Such people have lots of drive and ambition, but they can’t work and get along with others.

3. Smart Only – The Charmer

People who are social smart, but sorely lacking in humility and hunger, are“charmers.” They are fun and entertaining, and likable for a while, but have very little interest in the long-term well-being of the team. Often their contributions to the team is negligible, and they hardly care about other's success. 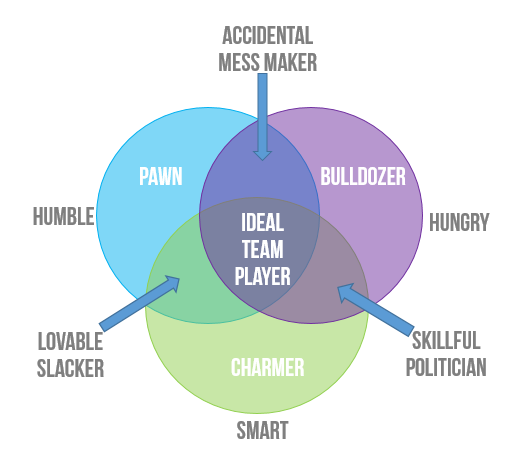 4. Humble and Hungry, but not Smart – The Accidental Mess Maker

These people have good intentions and want to serve the team. However, their lack of emotional quotient and unawareness of how their words are received by others causes them to damage their interpersonal relations with the team. Accidental Mess Makers have no bad intentions and can usually take corrective feedback.

Actionable advice: Become self-aware and possess a more positive attitude. Listen to others with an intent to understand and connect with people by engaging in a conversation.

5. Humble and Smart, but not Hungry – The Lovable Slacker

These people survive in teams for a long time. They are proficient at working with and caring about peers. Unfortunately, they tend to do only as much as they are asked and seldom seek to take on more work or volunteer for additional responsibilities. They have limited passion for the work the team is doing. Lovable slackers need significant motivation and oversight, making them a drag on the team’s performance, more so than accidental mess makers.

Actionable advice: Be more committed to your actions. Push yourself beyond your limit and get out of your comfort zone.

6. Hungry and Smart, but not Humble – The Skillful Politician

These people are ambitious and extremely hard working, but only in as much as it will benefit them personally. They are skilled in portraying themselves as being humble and are able to convince people that they care about them.

Actionable advice: Genuinely Care for others before yourself. Simply, say thank you to others and be more grateful.

Ideal team players possess all the three virtues: hunger, humility, and social intelligence. They work with a sense of energy, passion, and take personal responsibility. They walk the talk and make people feel valued, understood, and included in all situations.

Not every organization needs to be built on teamwork. Yet if one chooses this path, it’s absolutely necessary for every team member to practice these three virtues. For all this to happen, leaders need to be great role models by promoting positive team player virtues.

Every team player needs three virtues: a hunger to go above and beyond, the social smarts to communicate positively with the team, and humility to subdue their ego for the team’s collective good. If even one of these traits is lacking in a single team member, the whole team will suffer.

Does your team practice these three virtues? Do you recognize the above six persons in your teams? What have you done so far to become a great team player?