What’s Driving Your Need For Agility?

I’ve worked with a lot of organizations who are somewhere along their journey toward agility. Many of them talk about the cultural challenges they face in helping their organization, teams, and people to change. But discussions about culture can be vague and unsatisfying, like talking about the weather; everyone always has something to say about it, but no one seems to be able to do anything to change it.

I have created a little exercise that I like to use to help focus on things we can change, or at least situations to seek out or avoid, to help focus change efforts.  The essence of it is summarized in a picture (see Figure 1). I call this the agile affinity model, and the dimensions the key drivers of empiricism. This is one of the exercises we use in our Professional Agile Leadership-Essentials class to help managers better understand where agility fits and where it may help their organization. 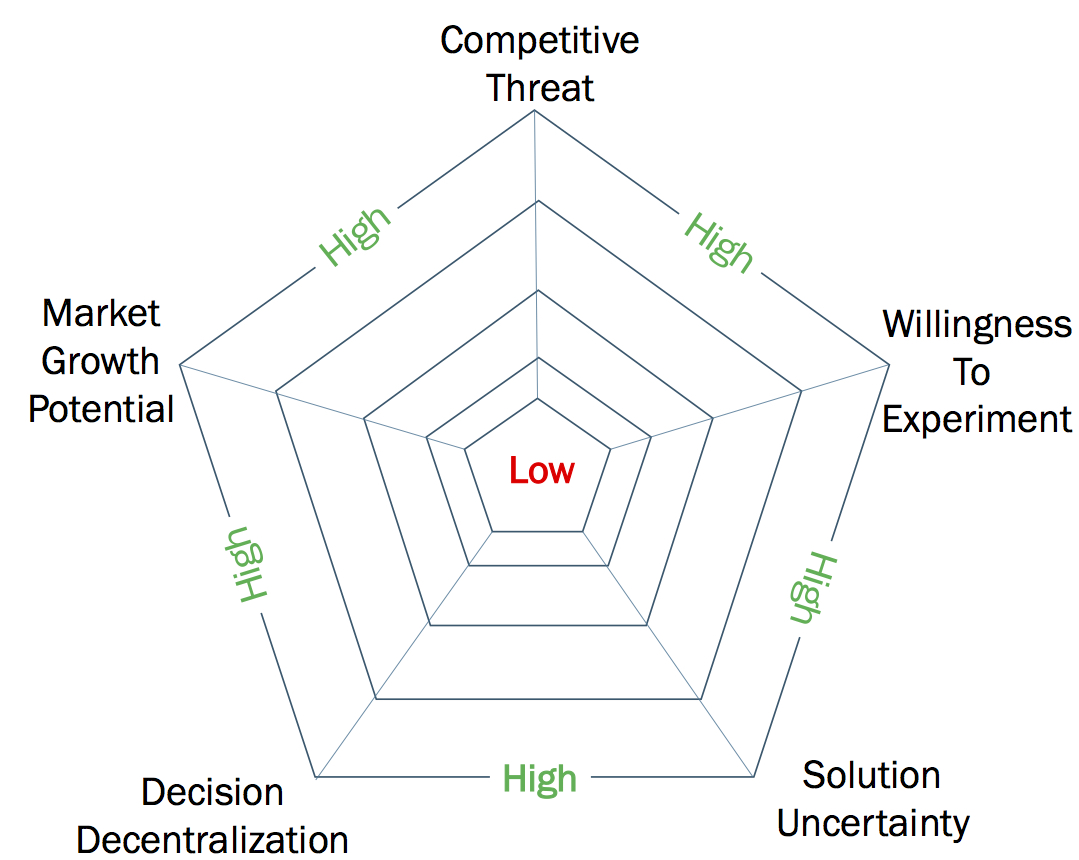 The Key Drivers of Empiricism

These dimensions express different forces, both internal and external, that affect the way people think about agility. By agility, I mean the use of an empirical approach to incrementally deliver business value, measuring the effect of that delivery, inspection of the results, and adaptation based on learning from inspection. Each of the dimensions are described below.

The competitive threat dimension expresses the degree to which the product is challenged by competitors.

The willingness to experiment dimension expresses the degree to which the organization is comfortable with planning uncertainty.

The solution uncertainty dimension expresses the degree to which the organization believes that they are certain about what the market or customers need.

The decision decentralization dimension expresses the degree to which decision-making authority is dispersed in the organization, in which certain specified decisions can be made by individuals or teams without having to seek approval from managers.

How You Can Use the Model

The model is intended to bring to the surface assumptions that may be unspoken but important or to cause people to think about the environment in which they are considering introducing an agile or empirical approach. There are no “right answers”, and you should be careful not to steer the group toward a particular answer.

If the group is large, divide up into smaller teams of no more than 5 people, potentially along product lines, if they work in the same company. Have each team plot each dimension for the product/team they work on. If there are people from different products in the same team, have them plot each product. Draw lines between the dimension scores, using a different color for each product. The result might look something like Figure 2.

Figure 2 Different products will plot differently on the affinity dimensions 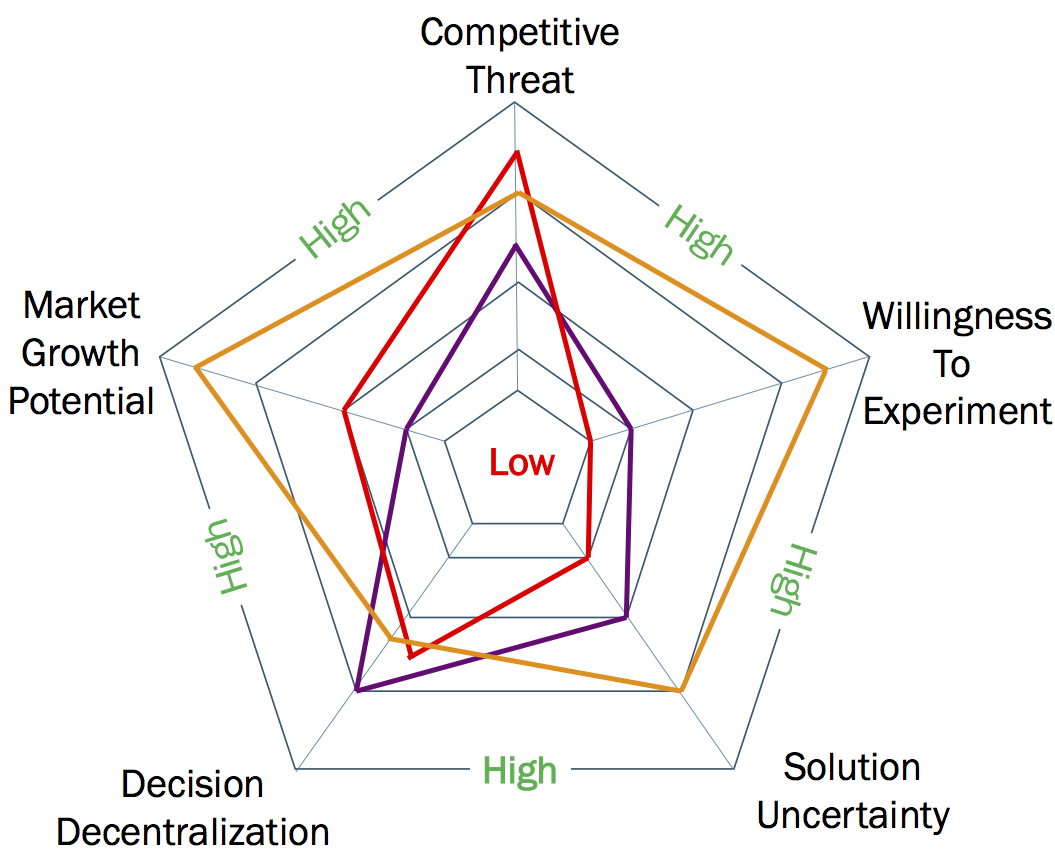 There are no “right answers”; the value in the exercise is to stimulate a discussion about the challenges each product organization or team may face in adopting an agile/empirical approach, and to get them to think about what they may need to do in response. I have each team go through their scorings and explain what led them to their conclusions. During this discussion, it’s important that whoever is leading the exercise, as well as the other workshop participants, just listen and ask clarifying questions.  After everyone has presented, you’ll want to help the group draw some conclusions. Some common discussion points are presented below.

When a product scores low in Competitive Threat, or Market Growth Potential, it’s worth discussing why that product would benefit from empiricism. If there isn’t much threat, or there isn’t much opportunity, maybe the organization should focus on products that have a greater need. Some organizations have come to see agile as the way they want to run everything, but that’s not very thoughtful. Most organizations can only really support so much change, and forcing a change that won’t produce much benefit is probably depriving some other team from getting the help it needs.

When a product scores high in the Competitive Threat, or Market Growth Potential, but low in other areas, they have opportunities with which empiricism could help, but they have internal barriers that may prevent them from working empirically.

Low Solution Uncertainty may sound like a good thing, but it’s generally not. The organization may believe that it knows what customers want, but if it’s not measuring customer experience it really doesn’t know. As a result, it may be missing opportunities to better serve those customers. The first step is to start measuring customer experience to see how many of its beliefs are actually true.

Low Willingness to Experiment often arises from an aversion to making mistakes in a “high fear” environment. It may also reflect a belief that increasing planning precision increases the likelihood that the plan will be correct. In these organizations, plans are regarded as “the gold standard” and any deviations from the plan are considered to be the result of poor execution. More often, the reality is that the assumptions behind the plan were not realistic.

Increasing the willingness to experiment takes time, and running lots of small experiments. Making small experiments is a lot less costly and disruptive than making big plans that often go wrong. Eventually, people realize that big plans were actually part of the problem, all along.

Low Decision Decentralization reflects a lack of trust between managers and team members. There are a variety of ways to work through this, provided that both sides are willing, and they generally center on the managers gradually giving teams more decision-making authority over small things, then working up to bigger things.

Using the Model as a Means for Improvement

Once you’ve discussed the differences, a good next step is to ask each team if they are happy with where they are today? Is their current approach working? Chances are it isn’t, since they are in a workshop that is usually part of a broader improvement effort.  If they do want to improve, you can use their example to have a discussion with the overall group about what things they might do to improve in that dimension. The point is for them to come up with their own action plan of things to try.

Not only are organizations different from each other, but different part of the same organization can be quite different. Everyone starts from a different place and has different goals, which is why there is no “one size fits all, or even most” approach to adopting agile practices, or to scaling them.  Different people will look at empiricism and agility differently. Not everyone sees the same need, and not everyone has the same goal. Helping them feel that it’s ok to find their own way is an important step toward self-organization.

Helping people better understand their own need for empiricism and attitudes toward empiricism helps them to leave behind the “we need to become agile (whatever that is)” mindset and start to really understand what empiricism will do for them, and what they will need to change to reap its benefits.