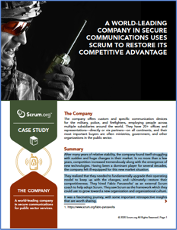 After many years of relative stability, the company found itself struggling with sudden and huge changes in their market. In no more than a few years, competition increased tremendously along with the emergence of new technologies. Having been a dominant player for several decades, the company felt ill-equipped for this new market situation.

They realized that they needed to fundamentally upgrade their operating model to keep up with the changes, and—ultimately—restore their competitiveness. They hired Fabio Panzavolta as an external Scrum coach to help adopt Scrum. They saw Scrum as the framework which they
could use to grow toward a new organization and organizational culture.

It was a fascinating journey, with some important retrospective insights that are worth sharing.