In my experience, the Daily Scrum is the Scrum event with the highest anti-pattern density among all events. Learn more about Daily Scrum anti-patterns that threaten your Scrum team’s success, from becoming a reporting session to assignments to answering these three questions. 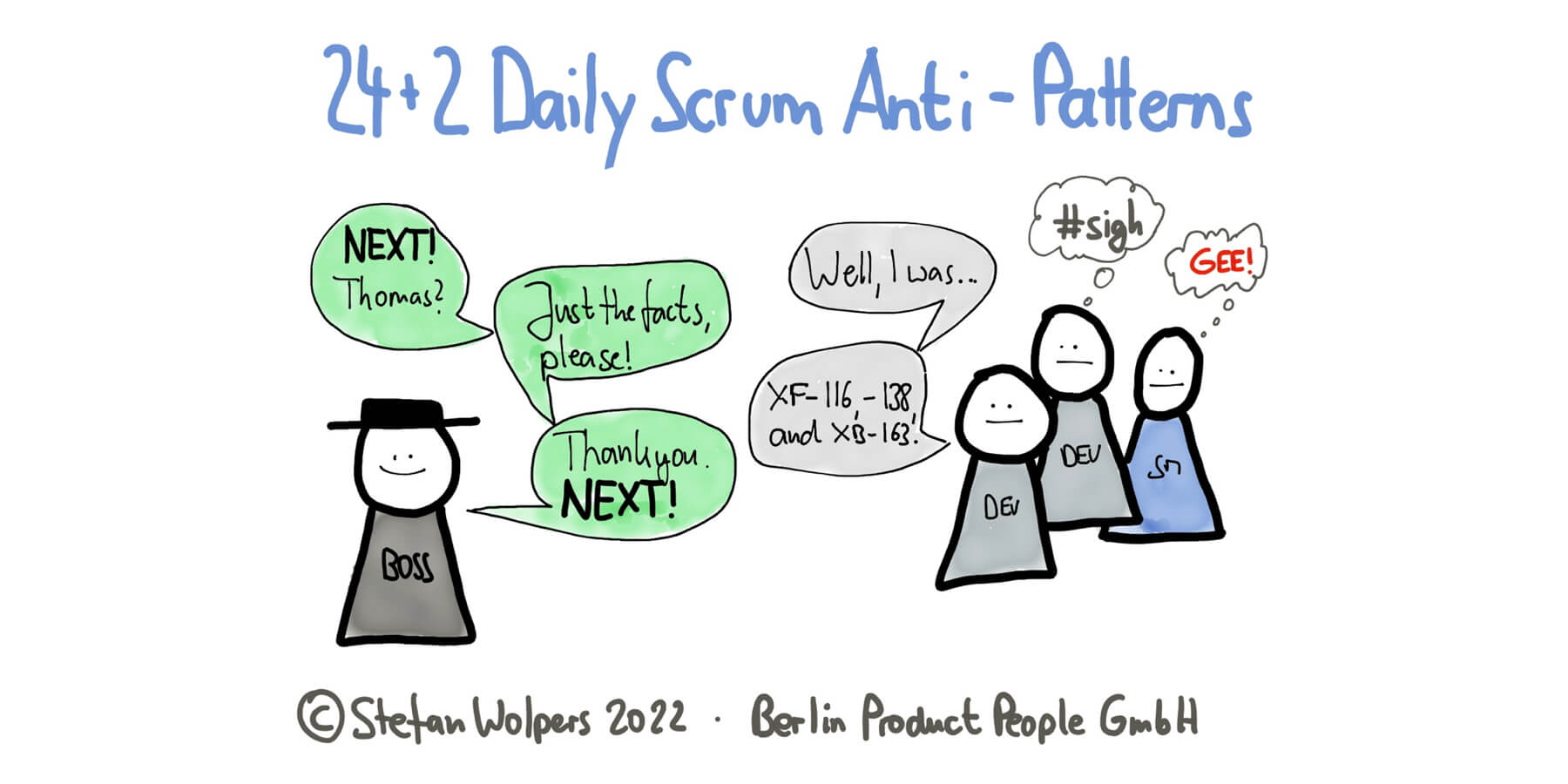 🗞 Shall I notify you about articles like this one? Awesome! You can sign up here for the ‘Food for Agile Thought’ newsletter and join 34,000-plus subscribers.

The Purpose of the Daily Scrum

The purpose of the Daily Scrum is clearly described in the Scrum Guide — no guessing is necessary:

The purpose of the Daily Scrum is to inspect progress toward the Sprint Goal and adapt the Sprint Backlog as necessary, adjusting the upcoming planned work.

The Daily Scrum is a 15-minute event for the Developers of the Scrum Team. To reduce complexity, it is held at the same time and place every working day of the Sprint. If the Product Owner or Scrum Master are actively working on items in the Sprint Backlog, they participate as Developers.

The Developers can select whatever structure and techniques they want, as long as their Daily Scrum focuses on progress toward the Sprint Goal and produces an actionable plan for the next day of work. This creates focus and improves self-management.

The Daily Scrum is not the only time Developers are allowed to adjust their plan. They often meet throughout the day for more detailed discussions about adapting or re-planning the rest of the Sprint’s work.

The Daily Scrum is an essential event for inspection and adaption, run by the Developers, and guiding it for the next 24 hours on its path to achieving the Sprint Goal. The Daily Scrum is hence the shortest planning horizon in Scrum and thus highly effective to guide the Scrum team’s efforts.

Contrary to popular belief, its 15-minutes time-box is not intended to solve all the issues addressed during the Daily Scrum. It is about creating transparency, thus triggering the inspection. If an adaption of the plan or the Sprint Backlog, for example, is required, the Developers are free to handle the resulting issues at any time. In my experience, most Daily Scrum anti-patterns result from a misunderstanding of this core principle.

Typically, a good Scrum Team won’t need more than 10 to 15 minutes to inspect its progress towards the Sprint Goal. Given this short period, it is interesting to observe that the Daily Scrum is often so riddled with anti-patterns. The anti-patterns often cover a broad spectrum, ranging from behaviors driven by dysfunctional Scrum teams to apparent failures at an organizational level.

My unprioritized list of notorious Daily Scrum anti-patterns is as follows:

Anti-Patterns of the Developers

Anti-Patterns of the Scrum Master

Daily Scrum Anti-Patterns of the Stakeholders

There are some issues that are worthwhile considering as a Scrum Team:

Substituting the Daily Scrum: What about the idea to skip the Daily Scrum altogether, as the Developers are heavily using more or less automated messaging systems on most aspects of their daily work, while they can handle the rest during other events, for example, pairing or mobbing sessions? Is it beneficial to allocate 15 minutes every day to the Daily Scrum under these circumstances? Or is that mere dogmatism?

Given the importance of the Daily Scrum for the success of the Scrum Team’s effort of achieving the Sprint Goal, its anti-patterns density is no surprise. Unfortunately, people seem to be either ignorant (or at least less well educated) about its purpose. Or they — intentionally or not — interfere with the Developers’ self-organization. One way or another, it is a crucial responsibility of the Scrum Master to help all participants overcome typical Daily Scrum anti-patterns.

What Daily Scrum anti-patterns have you observed? Please share those with us in the comments.

✋ Do Not Miss Out: Join the 11,000-plus Strong ‘Hands-on Agile’ Slack Team and Learn more about Daily Scrum Anti-Patterns

The article “Daily Scrum Anti-Patterns: 24+2 Ways to Improve as a Scrum Team” was first published on Age-of-Product.com.