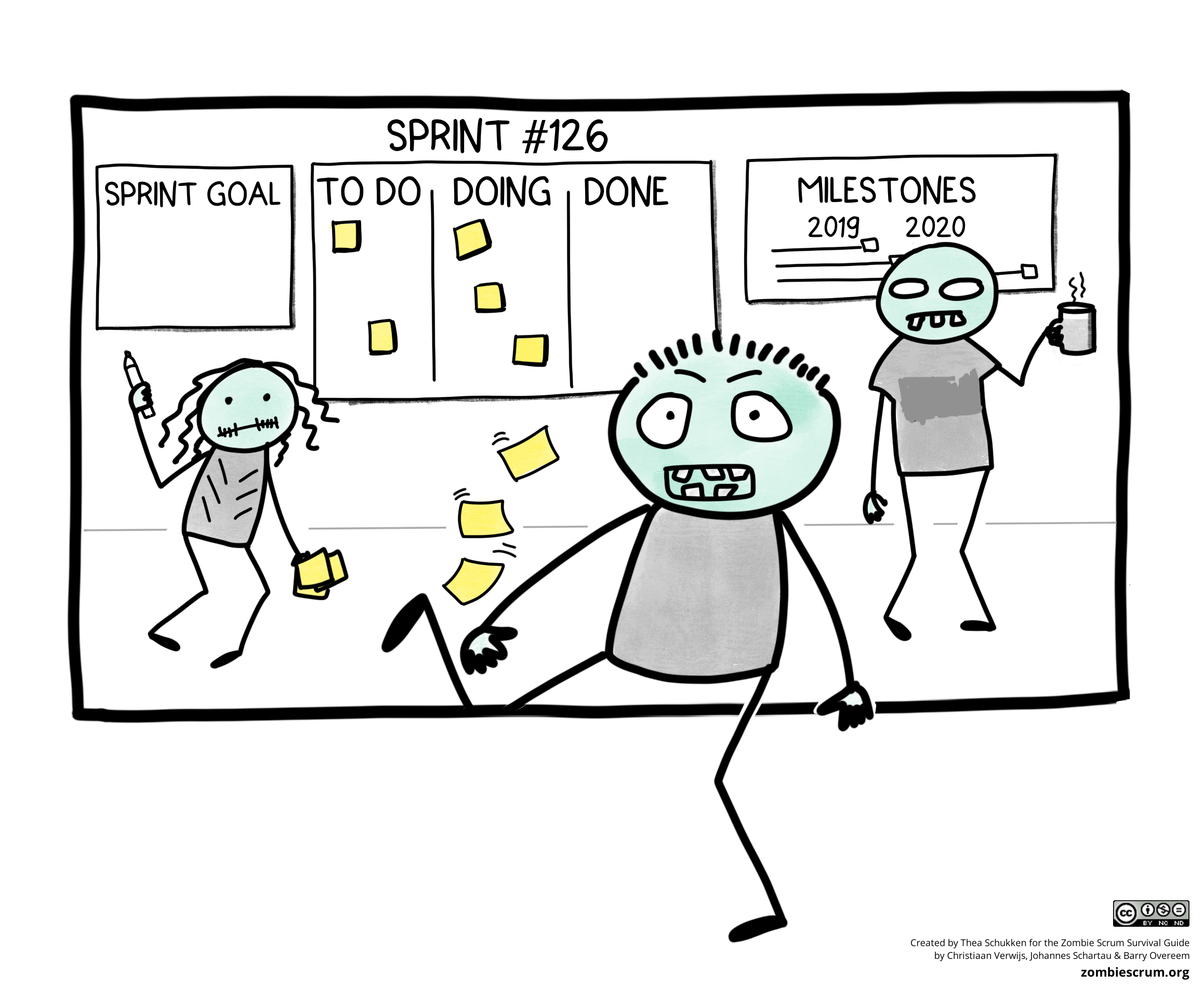 Scrum is a simple, yet sufficient framework for complex product delivery. It helps organizations thrive on complexity. Scrum provides minimal boundaries for teams to self-organize and solve complex problems with an empirical approach.

However, we’ve noticed that although many organizations use Scrum, the majority struggle to grasp both the purpose of Scrum as well as its benefits. Instead of increasing their organizational agility and delivering value to customers sooner, they achieve the opposite. We’ve come to call this Zombie Scrum; something that looks like Scrum from a distance, but you quickly notice that things are amiss when you move closer. There is no beating heart of valuable and working software, customers are not involved, and there is no drive to improve nor room for self-organization.

“Many organizations struggle to grasp both the purpose of Scrum as well as the benefits.”

One antidote we’ve found helpful is to rethink how teams interact, both within the team as well as with stakeholders and the broader organization. For this, we found help in Liberating Structures. Rooted in complexity science and based on simple recipes that allow everyone to be involved and unleashed, we’ve found them helpful to promote a fast-paced interaction, self-organization, high involvement, radical transparency, and creative destruction that we feel are vital to Scrum.

The State of Scrum

Scrum is huge! It’s widely adopted by organizations. Worldwide, there are hundreds of Scrum.org Professional Scrum Trainers (PSTs). Probably more than a million people are certified through one of the official Scrum institutes. Countless books and articles on Scrum have been written and every country has its own user group. Scrum has become the framework of choice for many organizations, each following their own promise of increased agility and faster delivery.

This is inspiring and is a cause for celebration. However, we’ve noticed that while many organizations and teams think they’re doing Scrum, they’re only touching the surface of what is possible. Most are stuck in painful mediocrity and struggle to find their way out, and we feel that our community is not taking enough responsibility in helping them get out.

For one, many organizations and teams think they’re doing Scrum by having all the roles, events, and artifacts in place, certified and all. And there’s a slew of coaches around to help them. But all these changes are superficial if there’s no working and valuable software at the end of each Sprint, ready to be delivered to stakeholders. All these roles are useless when there’s no drive to improve anything and no involvement from customers and users during development.

The state of Scrum?

A Real-Life Example of Zombie Scrum

A couple of years ago we worked for a large financial institute. They had the seemingly perfect transformation plan to rollout 50+ Scrum Teams in one year. Every week, a couple of new Scrum Teams were launched. The organizations buzzed with excitement. “Scrum of Scrums” started. Big room planning sessions were organized. Release Trains were planned. At the end of the year, the transformation plan was completed, and it was time for a big party. The Agile transformation was a success!

However, until that moment, they only used metrics focused on utilization and efficiency. Local optimization was encouraged without taking the bigger picture into account. People were being manipulated, and everyone felt as though they were being monitored and controlled. Although the utilization and efficiency metrics showed good results, everyone felt something was fishy…

Two years after the Agile transformation had kicked off, they started exploring different kinds of metrics. Instead of focusing on efficiency and utilization, they selected metrics that were useful and relevant for measuring the success of the empirical process implemented through the Scrum framework. They started using metrics focused on Agility and on value delivered, such as cycle time, customer satisfaction, team happiness, innovation rate, return on investment, and total defects.

When the first results of these metrics became visible, the whole organization was in a state of shock. Their cycle time had increased, customer satisfaction had worsened, teams were unhappy, the return on investment was very low, the number of defects seemed to go through the roof, and as a result, there wasn’t any time for innovation anymore.

What was going on? They had implemented all parts of the Scrum framework. All the artifacts, roles, and events were in place. They even added some extra practices like Scrum of Scrums and a big room planning… Why wasn’t Scrum delivering on its promise?

The answer is that although what they did certainly looked like Scrum from a distance, they actually missed the essence. This is a prime example of Zombie Scrum, and we need to work together as a community to help prevent it. Let’s stop going mindlessly through the motions of Scrum, and let’s start getting real value while having serious fun! 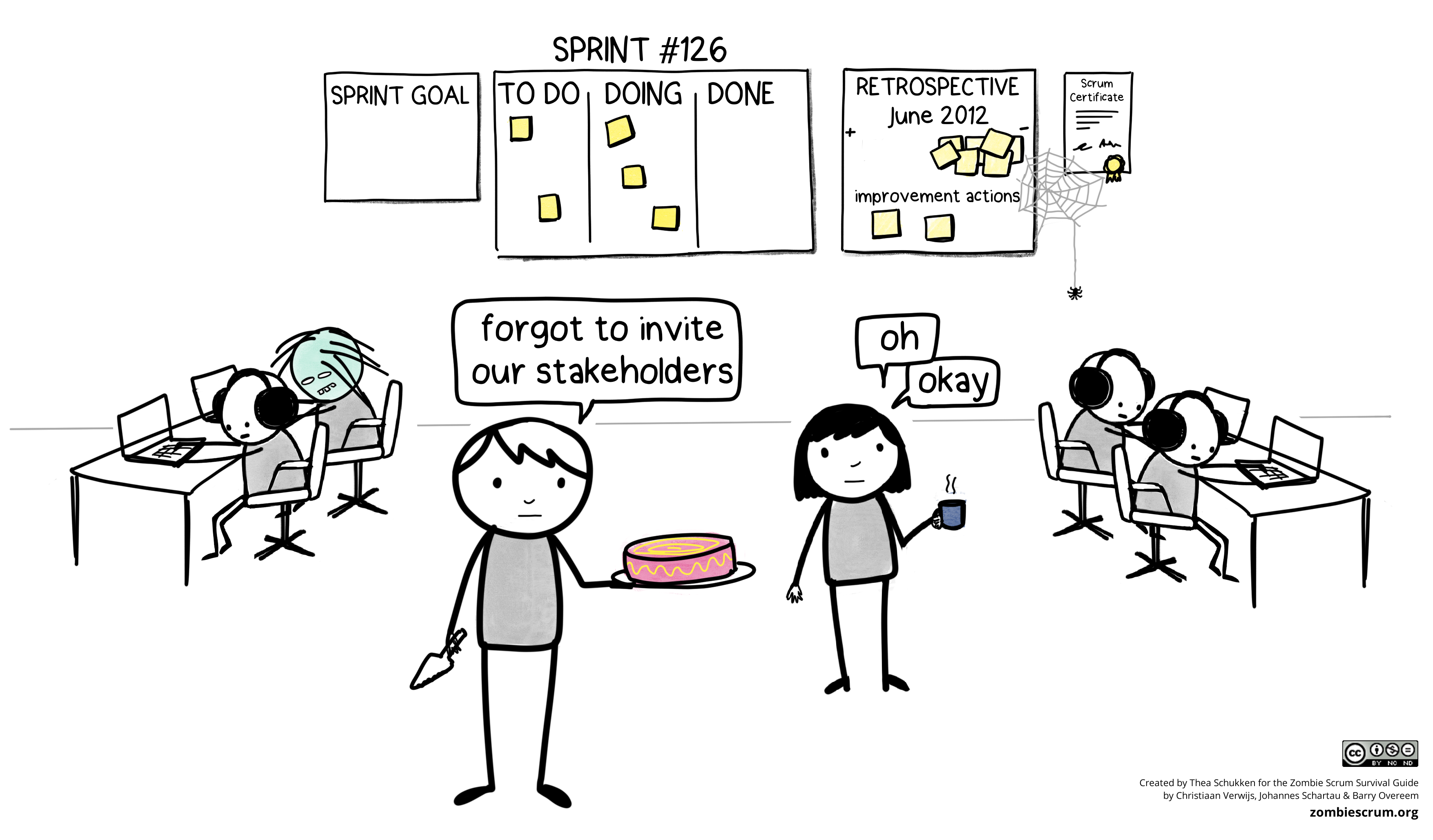 Can you spot the symptoms of Zombie Scrum?

For years, we have done extensive research and studied hundreds of teams and organizations. We’ve noticed the following patterns:

The number one cause of Zombie Scrum, however, is that most organizations and teams don’t have a clue as to why they are doing Scrum. We often hear reasons like…

“We are doing Scrum because our Agile Coach said this was a great idea.”

Over the years working with different Scrum Teams and organizations, we’ve seen reasons like these don’t demonstrate a real understanding of why Scrum and empiricism matter in the first place. Without such understanding, any implementation will remain superficial and flat, as people don’t have a good enough reason to persist in the face of the really hard challenges they are bound to face when trying to work empirically. It will just look like Scrum from a distance, but it will not actually help them to learn faster about what works and what doesn’t. Nor will it help deliver value to customers more quickly. 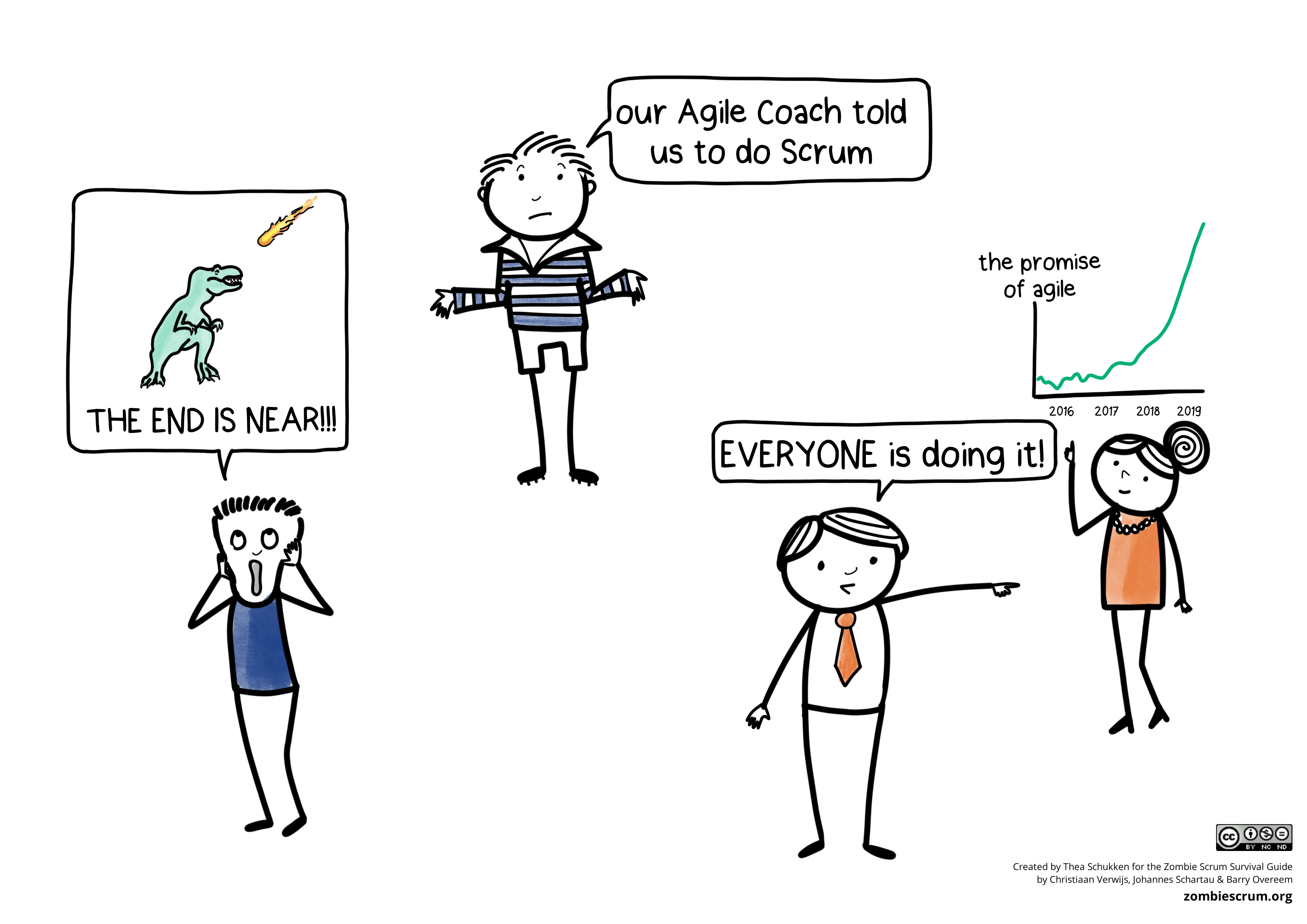 Liberating Structures are a collection of interaction patterns that learn people to unflatten, enrich, and deepen their interactions in groups. With roots in complexity science, and collected and curated by Keith McCandless, Henri Lipmanowicz, and a thriving community, they were initially developed twenty years ago in response to the stale and non-dynamic nature of interactions in organizations. The founders noticed how purposeless meetings, unengaging presentations, and chaotic brainstorms were often dominated by a few voices. With this, the creative ideas and different perspectives from a silent majority were lost, as was the potential for novel solutions to persistent challenges.

“Liberating Structures are a collection of interaction patterns that learn people to unflatten, enrich, and deepen their interactions in groups.”

Each Liberating Structure is specified on five design elements and embodies ten principles. Examples of design elements are the way space is arranged, how participation is distributed, and what invitation is used to start the interaction. Examples of principles are “include and unleash everyone”, “build trust as you go”, and “learn by failing forward”. New structures are being developed all the time and existing structures are refined or creatively destroyed.

Liberating Structures are simple enough for anyone to learn and able to “go viral” within organizations as people discover how well they work. By reshaping how people interact, the potential for self- organization and finding break-through solutions is unleashed. 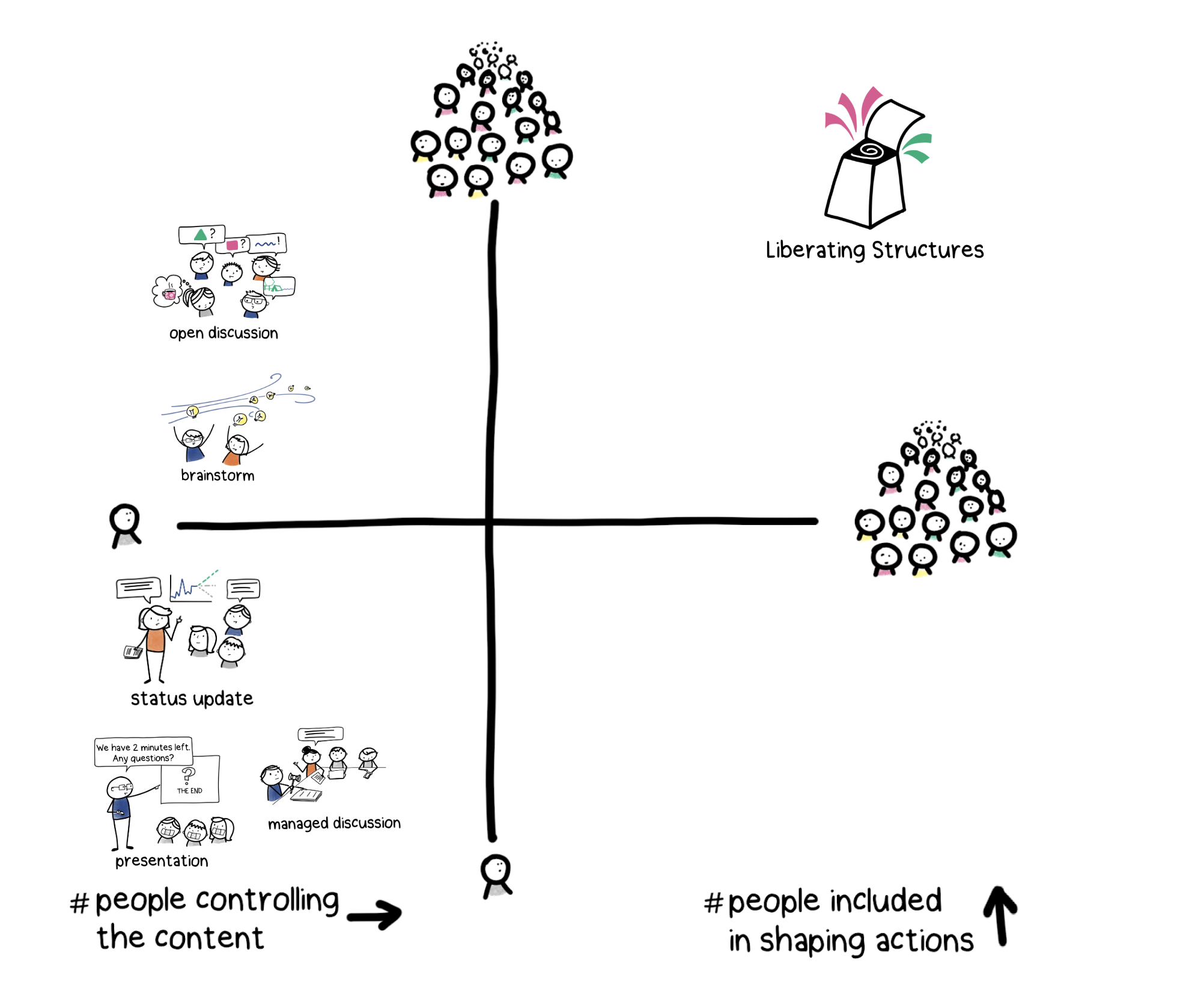 Using Liberating Structures as an Antidote

Liberating Structures fit very naturally within Scrum, as many Scrum Teams have discovered since we started spreading them within our community. They open a wide variety of applications, like problem-solving, determining strategies, improving collaboration, and creating shared understanding. When working with Scrum, all of this is relevant.

To make this tangible, we’ll give you three examples of how we’ve used Liberating Structures as an antidote to Zombie Scrum.

If you want to learn in detail what Liberating Structures we’ve tried and how it was used as an antidote to Zombie Scrum, check the whitepaper on the Scrum.org website. The purpose of this article is to create awareness for the whitepaper and to help you decide if you’re willing to invest time in reading the 12-page paper. We’re confident you’ll make a wise decision :) 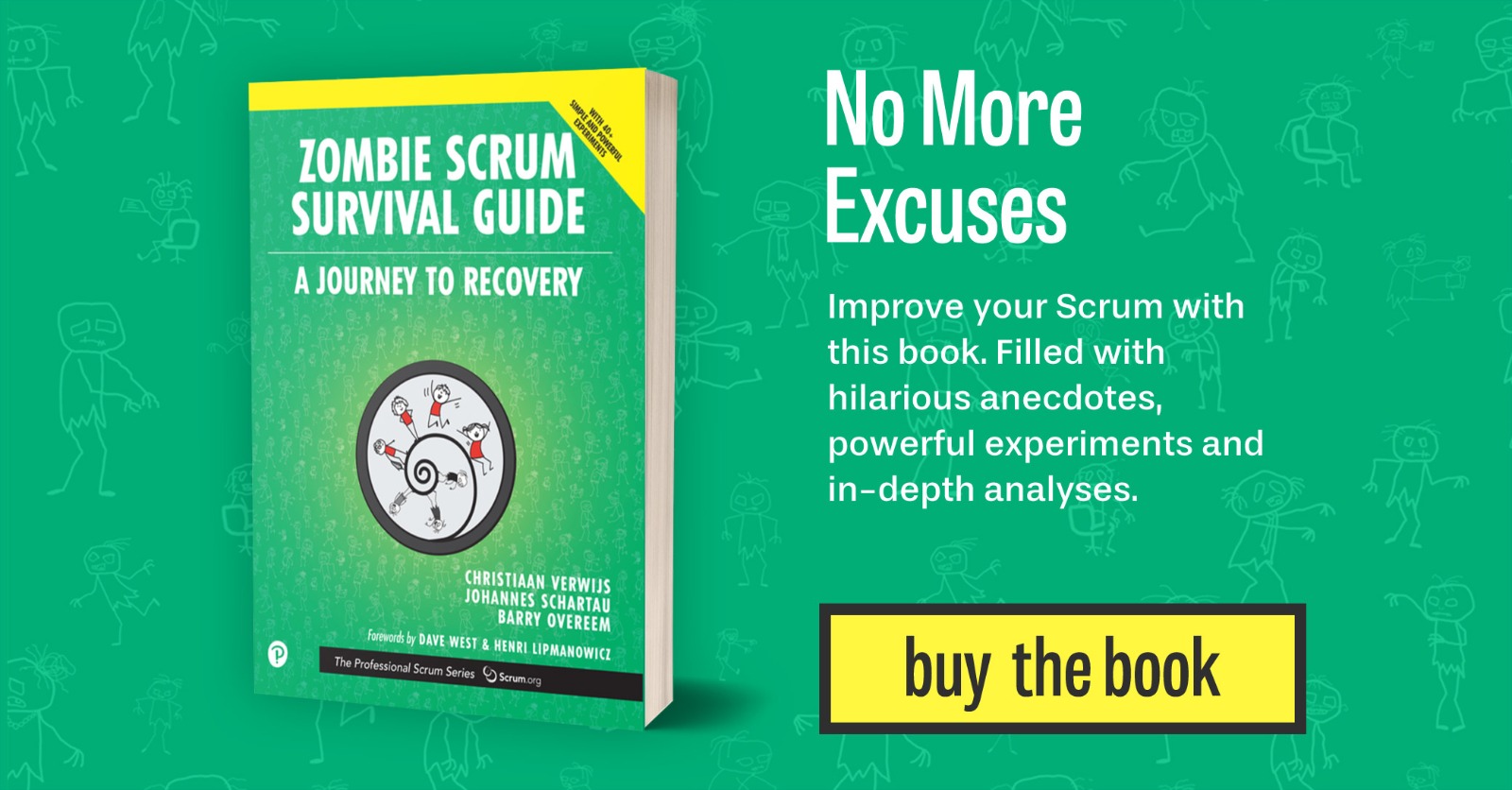