Myth: Having A Sprint Goal Is Optional In Scrum

Scrum is intended as a simple, yet sufficient framework for complex product delivery. Scrum is not a one-size-fits-all solution, a silver bullet or a complete methodology. Instead, Scrum provides the minimal boundaries within which teams can self-organize to solve complex problems with an empirical approach. This simplicity is its greatest strength, but also the source of many misinterpretations and myths. In this series of posts we — your ‘Mythbusters’ Christiaan Verwijs & Barry Overeem — address common myths and misunderstandings. The great visuals are by Thea Schukken. You can find previous episodes here.

Does your Scrum Team use Sprint Goals? If not, why? Perhaps your team is finding it hard to identify a goal for the Sprint out of the patchwork of items on the Sprint Backlog? Or perhaps the Product Owner doesn’t know how, being unable to balance requests from many different groups of stakeholders?

In this post, we bust one of the most persistent myths in Scrum; the notion that Sprint Goals are optional in Scrum. A practice that is nice-to-have, but hardly ever practically possible. We will show that the reverse is true.

Let's begin by revisiting the Scrum Guide. It starts by explaining the Sprint Goal is crafted by the Scrum Team during Sprint Planning, usually based on an objective defined by the Product Owner. The guide goes on to clarify that a ‘Sprint Goal’ is an objective for the Sprint that will be met through implementing selected work from the Product Backlog. It “offers guidance to the Development Team on why it is building the Increment”. Instead of prescribing a format for Sprint Goals or how to craft them, the guide emphasizes that “The selected Product Backlog items deliver one coherent function, which can be the Sprint Goal. But the Sprint Goal can be any other coherence that causes the Development Team to work together rather than on separate initiatives”.

“The Sprint Goal can be any other coherence that causes the Development Team to work together rather than on separate initiatives” — Scrum Guide.

It's interesting to note that ‘Sprint Goal’ appears 27 times in the Scrum Guide. Of all the elements that make up the Scrum Framework, only Sprint (173), Increment (47) and Done (40) appear more often. Sprint Goals are also specifically referenced for the Scrum Events. Sprint Planning is used to craft a Sprint Goal. The Daily Scrum is used by the “The Development Team [..] to inspect progress toward the Sprint Goal”. The Sprint Review is about inspecting the Increment that resulted from work on the Sprint Goal, while the Sprint Retrospective is about inspecting how the team collaborated to do that work. And to further emphasize the point, the guide notes that “Scrum users must frequently inspect Scrum artifacts and progress toward a Sprint Goal to detect undesirable variances”.

This helps us understand three important purposes of Sprint Goals:

We now know that Sprint Goals are vitally important in how the Scrum Framework is explained by the guide. But that doesn’t immediately tell us why. Let's see what happens when teams don’t work with Sprint Goals.

Optional note: Some people wonder why the Sprint Goal is not an artifact in Scrum if its so important. Although this question has merit, we feel that a deeper Scrum exegesis puts too much focus on the framework instead of its underlying purpose. Having a Sprint Goal is one of the rules of Scrum, as is having a shared understanding of “Done”. Neither are ‘artifacts’ according to the framework, but both are incredibly valuable to navigate complexity and all the potential confusion that entails.

What happens without Sprint Goals …

The Scrum Framework is built on the observation that product development is complex work involving a lot of problem-solving. Sprint Goals are apparently very important there. So let’s do a thought experiment and imagine a team that doesn’t make use of Sprint Goals. You’re likely to observe:

You are certainly not alone if you recognize some of these in your teams. Most of the reasons why Scrum Teams and organizations struggle with Scrum can be traced back to missing Sprint Goals and — behind that — not understanding the reasons for working with Scrum.

The Scrum Framework proposes to reduce the risks of complex and unpredictable work by working in small steps. Each step is a time-boxed ‘experiment’ that helps us make visible what other work is necessary. The most useful experiments here are those that make us deliver something valuable to stakeholders, and to learn from their feedback. A Sprint is the “smallest possible time-box for a Scrum Team to deliver a coherent set of valuable features without losing focus”. Instead, Sprints are often understood merely as arbitrary containers to “fill with work”.

Sprint Goals are intended to help organizations break free from this output-driven approach, where the focus lies on efficiency and getting as much work done as possible, by focusing on valuable outcomes and an experimental mindset. Let’s explore some examples of Sprint Goals to see how this is done. 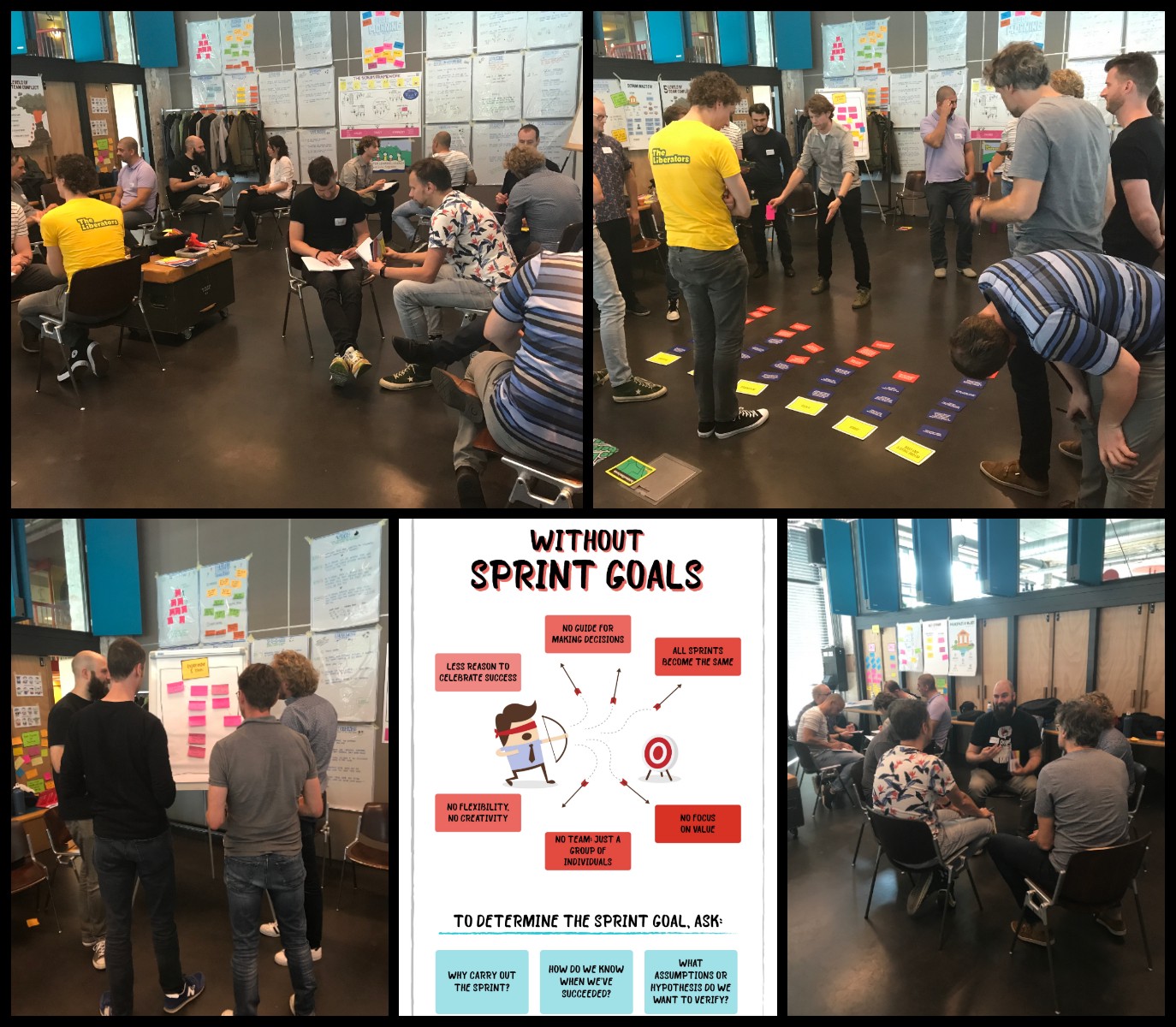 We once worked with a Scrum Team that developed a product for flex-workers to track time and get paid for it. The submitted hours were then validated by employees for flex agencies and processed for payment. Although we had access to users and domain experts, we used Sprints to learn how to build this product and to identify additional features as we went. Below are the Sprint Goals for the first three Sprints:

Sprint 1: “This Sprint exists to set up our deployment infrastructure to deploy a secure, working login page.”

We started the first Sprint with an empty canvas. With only two weeks to go, and aiming to deploy to production continuously, we decided to focus on setting up and configuring all the required infrastructure (both in terms of servers and code) to deploy a working login page. This also required us to implement OpenID and secure the application.

Sprint 2: “This Sprint exists to use-test the interface for entering hours”

For the second Sprint, we were eager to test our ideas for creating a more user-friendly hour-registration interface — one of the competitive advantages of the product. Going into the Sprint, we only had a rough sketch from our designer. We pulled all the required work from the Product Backlog (design, testing & deployment included) that we could complete in a Sprint. However, we soon discovered that creating the interface took far more time than expected. So we worked with the Product Owner to narrow the scope of the Sprint Backlog and decided to focus only on entering hours for the current week.

Sprint 3: “This Sprint exists to allow flex agency employees to validate the hours submitted this week.”

For the third Sprint, we wanted to expand the workflow by allowing employees from flex agencies to log in and validate submitted hours. During the Sprint, we encountered many issues with the authentication platform we used (OpenID). Members of the team swarmed on this issue, with a member from another team also jumping in. Sustained development continued for another 16 Sprints, and the product is still in use.

These examples, though not perfect, illustrate how Sprint Goals are not a result of a Sprint Backlog, but rather their starting point. Before starting development on the product, we already spent time with the team to identify likely objectives for the first Sprints.

Reasons for not having Sprint Goals

Up to this point, we’ve seen how important Sprint Goals are to Scrum. We’ve also seen some examples. Yet, most teams don’t use them. Below are some of the reasons we hear most often:

“Scrum Teams may work on different products or projects at the same time, making it hard to identify one singular goal for a Sprint.”

You may find yourself, your Scrum Team or your organization using one or more of these reasons. Save perhaps for the last one, each of these is an impediment to working empirically.

Helping Product Owners think in terms of objectives for Sprints, and then turning them into Sprint Goals together with the Scrum Team is challenging. But taking this challenge head-on, instead of ignoring it, is vital to working empirically with Scrum and to create high-performing Scrum Teams. The following tips help:

“If the entire Product Backlog was lost, what would be the first things you would bring back at this moment in time? Why?”

“Find Sprint Goals that offer guidance during the Sprint and promote collaboration in your team.”

When teams start working with Scrum, working with Sprint Goals is often at the very end of the list of things to do. Most of the Scrum Masters we meet in our classes and work admit that they don’t use Sprint Goals with their teams. It's often experienced as too hard, too difficult and sometimes “impossible in our organization”. Its easier to start with the roles, artifacts, and events.

In this post, we showed how Sprint Goals are an integral part of how the Scrum Framework helps teams to navigate complex work. By its very nature, complex work requires teams to continuously make decisions about value, what to spend time on what let go of (for now). Sprint Goals offer much-needed guidance for the decisions. Without them, the whole framework unravels; Scrum Events lose their purpose, Scrum Teams have little reason to collaborate and organizations don’t start to think in terms of value.

“The lack of Sprint Goals is one of the biggest impediments facing Scrum Teams today.”

The lack of Sprint Goals — a singular purpose for a Sprint — is one of the biggest impediments facing Scrum Teams today. Although creating them is initially sometimes incredibly hard, it's exactly the kind of challenge that Scrum Masters should go looking for. We encourage you to do so!