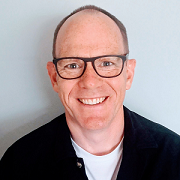 I have recently been helping a new Scrum team get started with the framework and helping them to set themselves up with the best chance of being successful with Scrum.

After a two week sprint in which they did deliver an increment and learned a lot about the product that they would be work on, it was time for their first retrospective. I decided that this would be an ideal opportunity to learn more about each other and so I was able to facilitate one of my favourite Retrospectives activities.

Remember that the retrospective isn't the only time a team can make improvements to the way it works - This can be done anytime during the sprint and they should be encouraged to do so. The Sprint retrospective is a formal opportunity within the sprint cycle to look inwardly.

I took the team out from their normal workplace, just because it felt the right thing to do, and explained the overall purpose of a Sprint Retrospective. (Remember this is the first time that the team would have had a retrospective as a team)

I showed the team my journey map, something that I'd seen on my "Train The Trainer" course for the PSM, and on which I showed the highs and lows of my path to my current position.

This was done by taking a piece of A3 paper, drawing a line down the middle and then on left hand side drawing a vertical line with a plus sign and a negative sign. Then I plotted out my life so far: 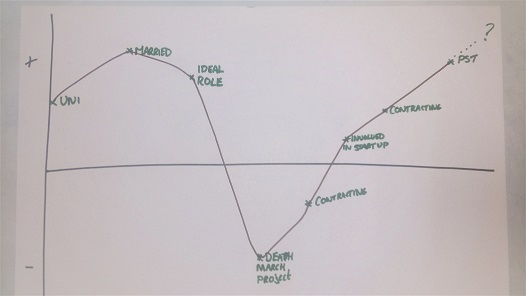 Then for 3 minutes I discussed the drawing; people laughed, asked questions,  they found out my children’s names and a little bit more about me - we started to bond as a team.

I then asked the room if they were happy to share this type of information, stressing the importance that if they are, they still control what they discuss and share with the rest of the team.

I then gave the team 5 minutes to think about their lives and to draw out their journey map.

Giving each team member 3 minutes to discuss their map, we found out things that would have taken the team ages to find out:

It was great to see that the team opened up to each other more. They started building trust with each other as they shared stories of similar experiences. They stopped seeing each other by their role, Developer, Product Owner etc.. and saw each other as people, all by drawing a wavy line.

Second Stage - Centre of The Universe

For the next stage of the Retrospective I asked the attendees to clear the room of chairs and to stand around the edges of the room. I then placed an item in the middle of the now empty meeting room and told them that that was the Centre of The Universe.

To prove the concept I asked some "warm up" questions; e.g.

I then moved onto more targeted questions e.g.

After each question, I asked the team to look at where their colleagues are standing in relation to the room and to them.

This knowledge will be useful to them when people behave differently to what they'd expect - "Why does Jon talk freely one on one, but in the Daily Scrum he is a little shy? Why does Jane go quiet when we're getting heated when discussing product backlog items in planning?"

The whole session was meant to be a fun way finding things out about people. We also learned that:

Armed with this newly gained knowledge we know a little more about what makes our new colleagues tick and the experiences that they've had which contributes into making them the person they are.

I went away with a smile on my face and I know that the team went away laughing and knowing more than they went in with.