The Agile Paradigm (wishing you a great 2016) 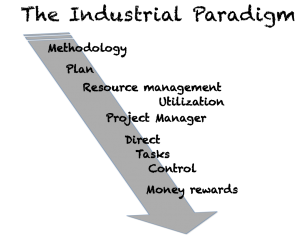 The domination of software development by a paradigm of industrial views and beliefs, a copy-paste of old manufacturing routines and theories, got us in a crisis. The attempts to overcome this crisis by fortifying the industrial approach are without result. The flaws and problems are huge, known and well documented. The crisis largely continues to this day. 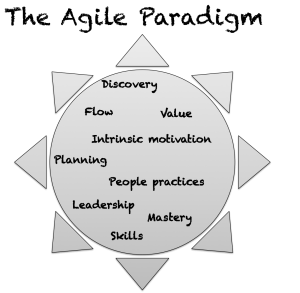 Yet, many say that Agile is too radical. They keep propagating, to this day, a gradual -if any- introduction of Agile practices into existing, traditional processes. Having witnessed several of such attempts, I am extremely skeptical about such a 'gradual' evolution, a slow progression to the Agile paradigm. Because:


A gradual shift is factually a status-quo. The industrial paradigm remains. A permanent crisis is called upon us.

It requires honesty to accept the mismatch of the old ways, and courageous leadership to embrace the new ways.

Abandoning the old thinking will take time. Scrum helps. Its distinct rules help in getting a grip on the new, Agile paradigm. The limited prescriptions allow immediate action. They allow developing new ways of working; through discovery, experimentation-based learning and collaboration. It is worthwhile the giant leap.

I wish you a 2016 of determination and improvement. I congratulate you with the hard work you will have performed in a year from now.