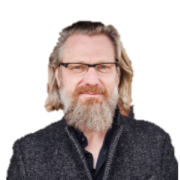 Gunther Verheyen calls himself an independent Scrum Caretaker on a journey of humanizing the workplace with Scrum. He has been employing Scrum since 2003, has published two best-selling books about Scrum and has partnered with Ken Schwaber, co-creator of Scrum.

Gunther ventured into IT and software development after graduating as an Industrial Engineer in electronics in 1992. His Agile adventures started with eXtreme Programming and Scrum in 2003. Seven years of dedication followed; years that he spent on employing Scrum in diverse circumstances with various teams. In 2010 Gunther became the inspiring force behind some large-scale enterprise transformations. In 2011 he became a Professional Scrum Trainer for Scrum.org.

In 2016 Gunther embarked on his journey to humanize the workplace as an independent Scrum Caretaker; a connector, teacher, writer, speaker. Gunther aspires helping organizations to re-imagine their Scrum to create a more humane and thereby more productive environment.

Gunther published the acclaimed book ‘Scrum – A Pocket Guide’ in 2013, which was recommended by Ken Schwaber as “the best description of Scrum currently available”. A 2nd edition was published in 2019. In 2020 Gunther published the book ‘97 Things Every Scrum Practitioner Should Know’ with essays from field experts across the world.
When not traveling for Scrum and humanizing the workplace, Gunther lives and works in Antwerp (Belgium).