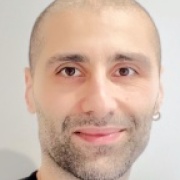 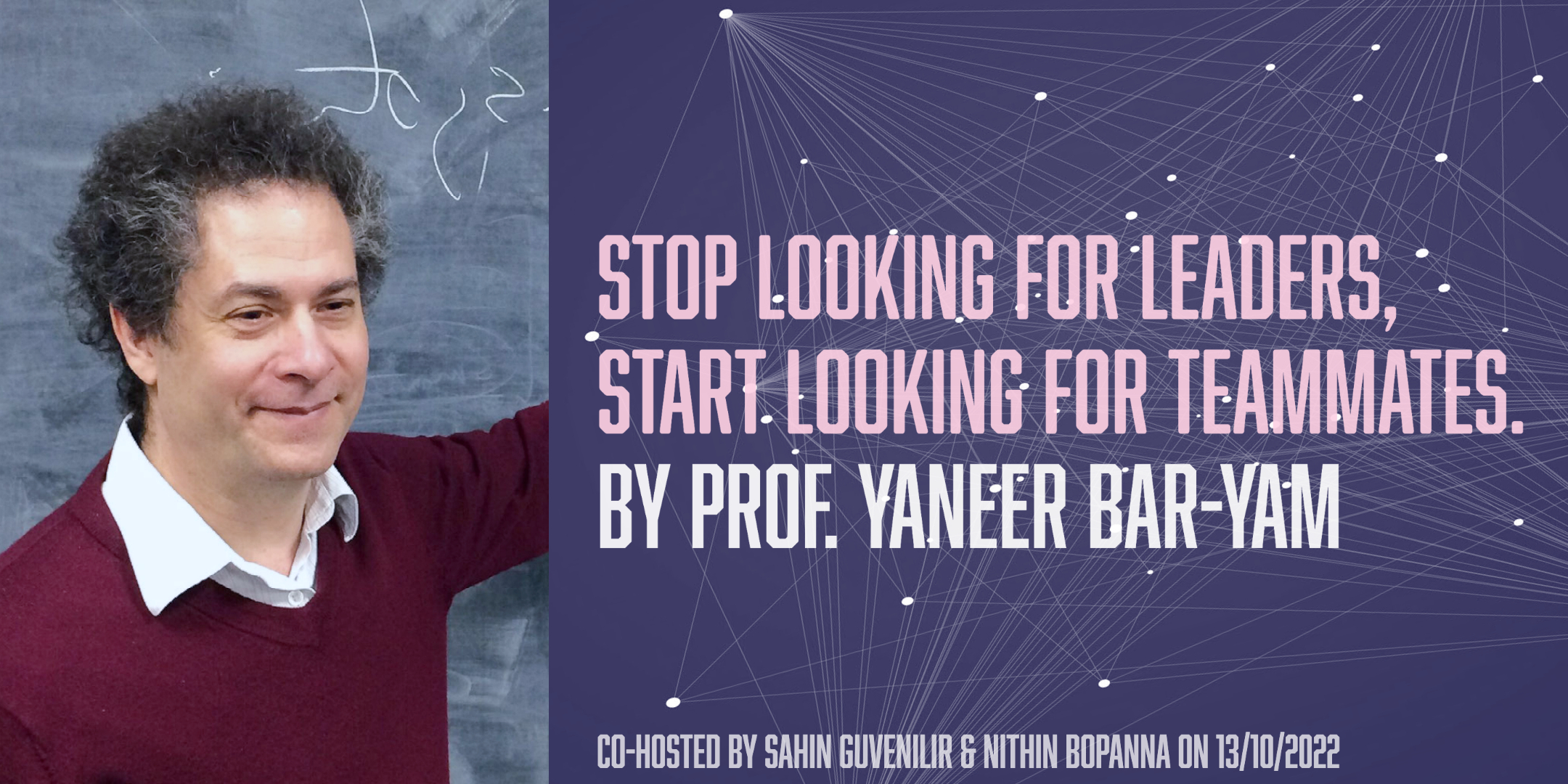 "We can mathematically prove that we must make teams to deal with today's complex problems. We don't fight gravity. So, we shouldn't fight this fact either."

This is how Professor Yaneer Bar-Yam, founder of New England Complex Systems Institute, welcomed his audience in a virtual room just before he started his talk "Stop Looking for Leaders, Start Looking for Teammates" which was co-hosted by Nithin Bopanna and myself on the 13th of October.

Yaneer is an eminent American physicist known for his contribution to the mitigation of ethnic violence in Europe, eradication of the Ebola outbreaks in West Africa, advising the Pentagon in social unrest, and founding the field of Complex Systems Science. After receiving his PhD in physics from MIT in 1984, he spent most of his time developing new mathematical methods for a wide range of scientific and real-world problems ranging from cell biology to the global financial crisis. Recently he's been working with Nassim Nicholas Taleb as a part of a global, multidisciplinary network of experts with a mission to advise policymakers and communities about practical strategies to eliminate COVID-19.

So, rest assured, he is someone who talks to talk and also walks to walk when it comes to explaining the science behind the success of self-managed and cross-functional teams under uncertain conditions.

As a group of change agents, PSTs, technology professionals, entrepreneurs and investors, we explored teams and leadership concepts, and what they entail in view of today's constantly changing world, with Yaneer. Below I shared some of the insights that he provided during the session.

If you are interested in becoming a part of this community and exploring similar topics together, please feel free to get in touch with me: sahin@vaxmo.co.uk

Let's give an example from medical specialists. If you go to the doctor, usually, you go to a general practitioner, a family doctor or whatever, they will take a look at you and they will send you to one of a number of specialists.

How many specialists are there? Well, it turns out that there is an increasing number of specialists. And the question is, why are there specialists? The answer is complexity.

Complexity is measured in terms of the set of possibilities. Again, if there were only one possibility or two or three or four possibilities, you could have one type of doctor. But there are thousands and thousands of different possible things that can happen.

Okay, so here's the next idea. What happens if we put them together in a team? How many possible things can they do?

So why does this happen? The answer is "the space of possibilities". Between two specialists if each has the ability to deal with seven different possibilities. But if you combine them together, they can have 49 possibilities. Huge.

There's no other way.

A short video about this topic from the event: Why do multidisciplinary teams outperform specialist groups when dealing with complexity

What is a better alternative to the hierarchy structure?

So this statement about the limits of complexity, it's important. The reason that society could have had hierarchical systems in the past is because that it wasn't complex enough.

You wouldn't make teams if hierarchical systems work. You only make complex systems to deal with complex environments (Ashby’s Law of Requisite Variety - WR Ashby, An Introduction to Cybernetics, Chapman & Hall, 1956). That's the only reason. There's no other reason to make systems complex. Because it's harder.

So the bottom line is it is manifest that the world is facing a complexity transition. And this is a diagram that you can find in a paper called Complexity Rising. Basically, the collective complexity of civilization has been increasing over time and we've been crossing this boundary, which is the boundary across the individual's complexity. And once you get beyond this boundary, you have to have teams. No choice. 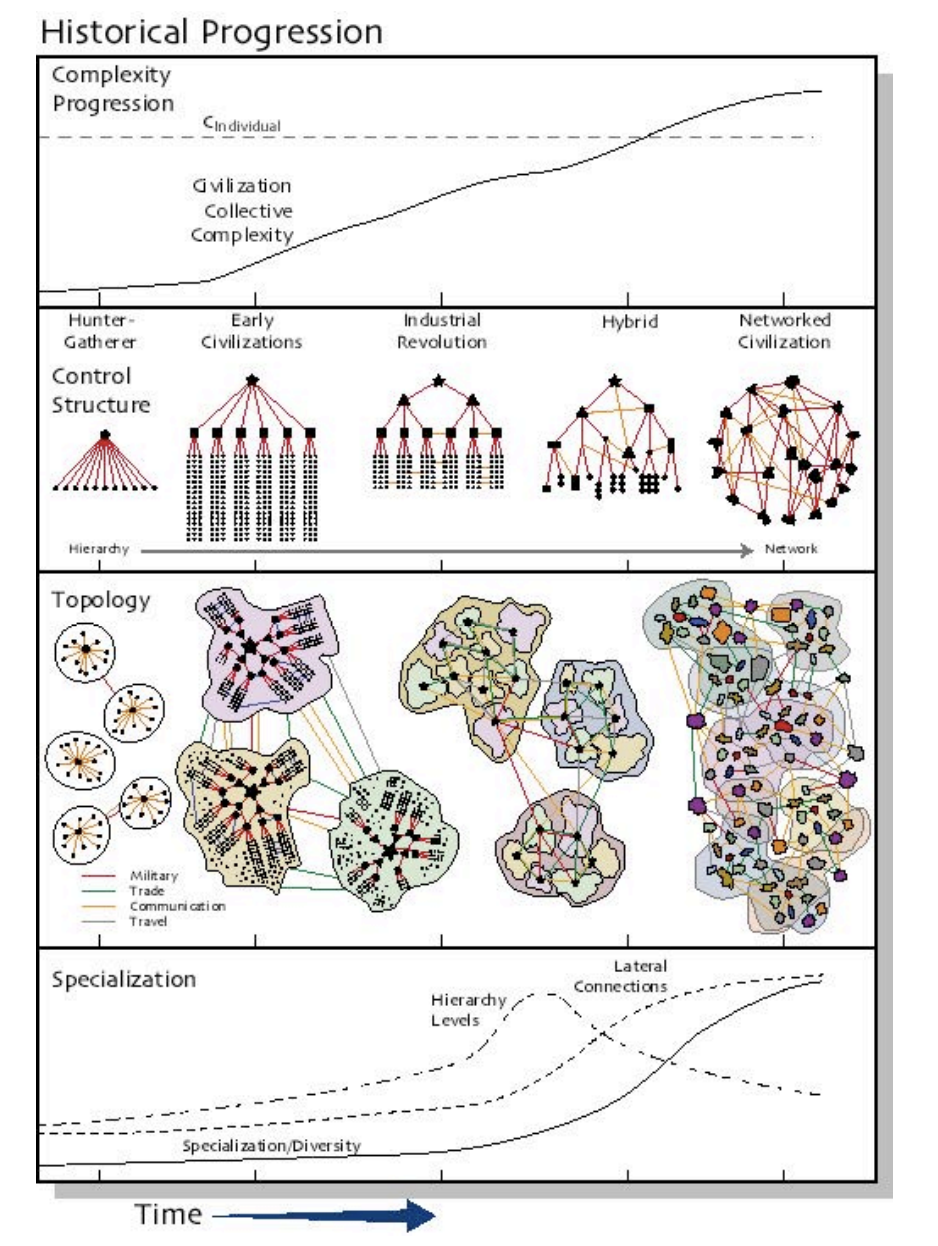 A short video about this topic from the event: Why did hierarchy structures work in the past, but we should find a better alternative today?

So, we know we need to make teams. But how?

There are some things that I can say, such as the set of individuals has to have different capabilities that are complementary, and they have to actually work together. There's a difference between teams that are voting "I'm voting for this, you're voting for that". That's not a team. That's a committee. A team is some people who actually work together to solve a problem, to engage in the same challenge. But the mechanisms by which they do that are not clear.

So, if you ask me to tell you how to make a team, I know I can't do that, and neither can anyone of you. The challenge of making teams is a fundamental challenge. It's not a superficial one.

We can talk about it a lot if you want, but the ultimate answer is you can't engineer it. You have to figure it out by experience. That doesn't mean that thinking about it doesn't help. It does. But we have to work on it by experience.

A short video about this topic from the event: How to make teams?

What is the biggest challenge of building an effective team?

One of the critical things here is that if person A knows something different than person B, they actually can't evaluate what person B knows. So a team has to be based upon trust, but it's actually very difficult to build it. You have to build it through actual experience, by working together. And that's super hard.

I'll tell you a story. Many years ago, I realized that we needed an editor for our writings. It would really help us because doing the last step of editing took a long time. So I looked for an editor, and I had several people interview. I spoke with each of them, and I gave them a test. And in the end, the one that helped the most was someone that I couldn't understand what they were saying in the interview. I couldn't really. I gave her the test, and within a few minutes, she edited a substantial scientific document. I would send her our papers and she would send them back a few hours later. And they were always outstanding. I never had someone who did a better job than that.

The point is that it's very hard to evaluate. The flip side also happens. You evaluate someone, you think you know they're good, you bring them in and they don't know what they're doing.

And even if you constantly evaluate them, you'd better be careful, because if you evaluate based upon your criteria, you may be throwing out people that are good because they're contributing in a different dimension. So, it's not easy. And generally, the people that can help the most are the people that you cannot understand, almost by definition.

A short video about this topic from the event: Why trust is essential for a team and also very hard to build

So, there is no universal best practice for building effective teams?

No. How do I say this? There are two parts to it. One is that complexity means you can't figure it out because there are too many possibilities to analyze. But a way to understand it, really is that it's not universal. In other words, there's no universal idea about how teams work. It's all contextual. So throw out the big consultancy handbooks because they cannot tell you what the best practices are. There is no universal best practice.

A short video about this topic from the event: There is no universal best practice for building effective teams

Is EQ a parameter in a team setup? How to work with competent people who lack empathy?

So the answer is it would be great if we knew how to accommodate all possible people with all possible divergent talents into the system, but we can't. So focus on the context that you have and don't try to do it beyond that.

If they're causing the system not to work, get someone else. But that doesn't mean that it in principle isn't possible to do it. It just means that in practice, which is super important, it may not be a good fit.

A short video about this topic from the event: The broader we accommodate differences the better our teams function, but is it always practical?

Final Note: The Fall 2022 Courses in Complexity provided by Prof. Yaneer Bar-Yam at New England Complex Systems Institute is now open for registration. As a former student, I can vouch for the program as a useful way to learn essential concepts of complex systems and related mathematical methods and simulation strategies with application to physical, biological and social systems: https://necsi.edu/school