This is quite a long read which you can download as the whitepaper "Systems Thinking in Organizational Coaching".

How many times have you “improved” something in your organization, but the improvements didn’t last long? Or how about quick fixes that ended up having the opposite effect! And when was the last time you improved something and went far beyond your usual experience and thinking?

In his book “Thinking, Fast and Slow”, Daniel Kahneman writes about the two types of systems:

The “fight or flight” principle helped us to quickly make life-or-death decisions. Now we live in a world of digital technologies in a global post-industrial society. The majority of issues in complex environment cannot be best solved using System 1.

Systems thinking is a language and set of tools meant to illuminate our thinking about how the systems we are all part of actually operate (David Peter Stroh, Systems Thinking for Social Change, 2015).

In this whitepaper, I will be sharing an example of organizational coaching, in which I successfully applied the Systems Thinking approach. I was working with a service organization and found fundamental solutions to several chronic problems.

This paper is geared toward Scrum Masters, Agile Coaches, and change agents that work with large change initiatives. In fact, any type of change would benefit from using Systems Thinking approach.

When to Apply Systems Thinking

Systems Thinking is worth using when you are dealing with chronic problems; people try to apply solutions, but the problem returns over and over again, and sometimes the situation worsens. Systems Thinking broadens the number of available solutions and helps you to understand how these solutions impact other parts of the system. Tasks that are suitable for investigation with Systems Thinking tend to have the following characteristics:

A software development effort is always a system! It is part of a larger system, which might be a product area, a product organization, or the whole company. Therefore, when coaching organization it is vital to regard it not as a collection of independent functions or actors, but as a group of interconnected and interdependent parts, which form a complex and unified whole. Systems Thinking helps to find and address the root causes of problems and achieve long-lasting improvements. Possible solutions are sometimes found in the most unexpected places.

Systems Thinking recognizes mental models and structures in work and in everyday life. It reveals the reasons for chronic problems in complex organizational contexts. It is an important thinking approach for creating a general picture of reality, by means of engaging individuals with different viewpoints.

Misunderstanding of the Scrum Master Role

Recently, I worked with a group of Scrum Masters in a large service organization. During multiple interviews, I asked how much time they spent on organizational coaching. The Scrum Masters gave evasive answers while agreeing that it was an important part of the role. They complained of a major lack of time. In their words, team activities were absorbing all of their time. I was wondering why that happened because in Professional Scrum the Scrum Master should provide service to the whole organization, and the Scrum Guide provides examples of those activities:

Leading and coaching the organization in its Scrum adoption; Planning Scrum implementations within the organization; Helping employees and stakeholders understand and enact Scrum and empirical product development; and, working with other Scrum Masters to increase the effectiveness of the application of Scrum in the organization (The Scrum Guide)

On the other hand, the company understood the importance of the full time Scrum Master role. Each Scrum Master was working with one team only. I became fascinated by their lack of time for organizational coaching, and conducted investigation of which I will share the results.

The Language of Systems Diagrams

Throughout this whitepaper, we’ll be employing systemic diagrams as they relate to the scenario mentioned above. They depict the stories of behavior patterns and help observe the whole system. Causal-Loop Diagrams (CLD) are one of the most widespread tools in Systems Thinking. The elements of Causal-Loop Diagrams (CLD) are shown in Figure 1. The main elements of the diagrams are: 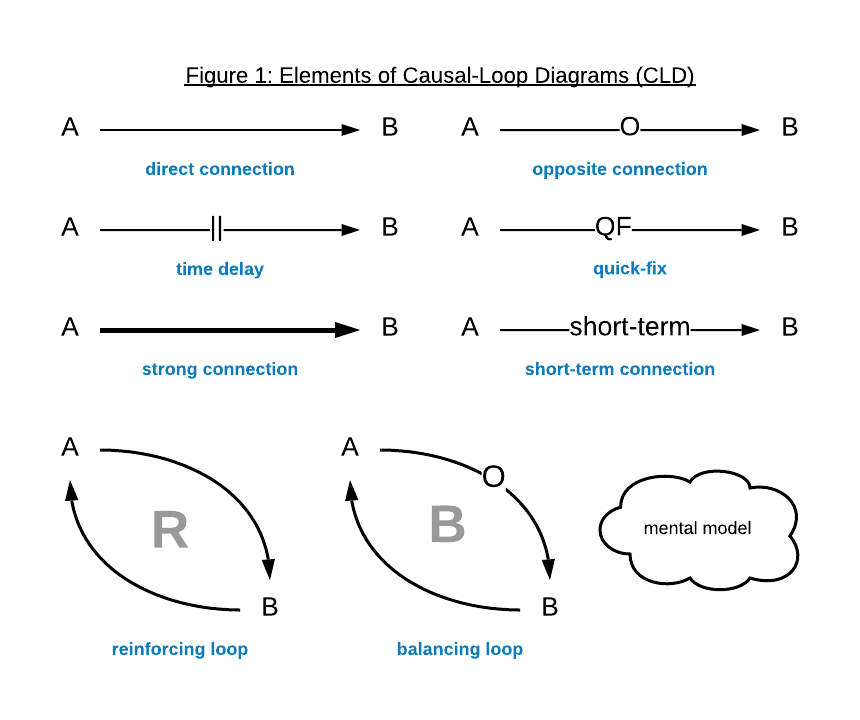 Now that you are familiar with the language of systems diagrams, let’s have a look at the results of the investigation.

Dependence on the Scrum Master

Generally, a Scrum Master has two options: to get involved and solve the issue/problem himself (direct intervention), or coach the team, making it more self-organized and autonomous (see Autonomous Team pattern). 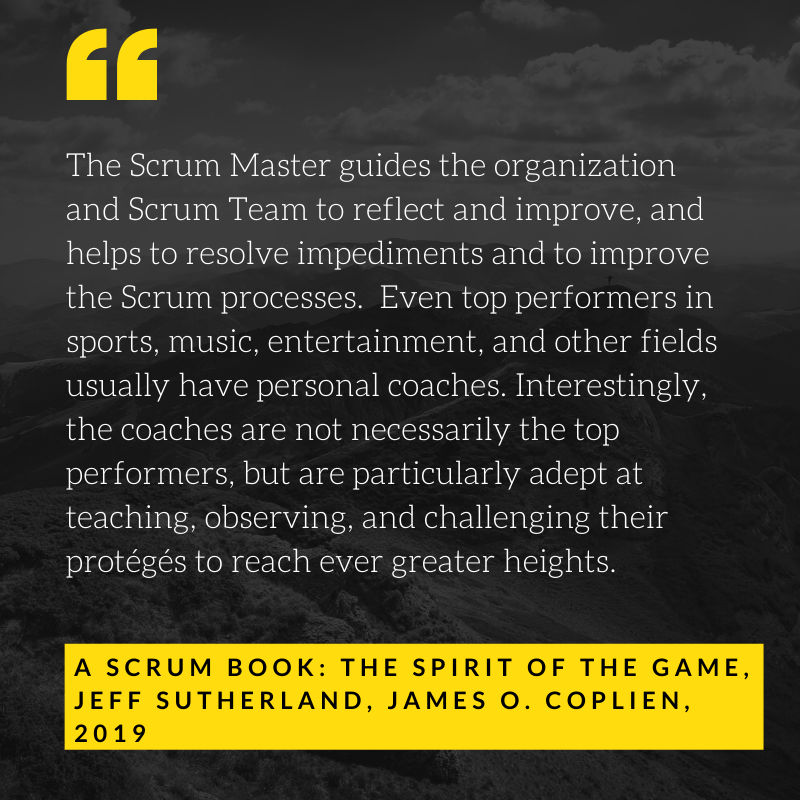 The teams and management also regarded the Scrum Masters’ roles as being exclusively to serve the teams. The mental model that I came across in many interviews was “Scrum Master is a team level role.” If to visualize the story in the form of a diagram, then we obtain a “Shifting the Burden” system archetype, which explains the dependence on the Scrum Masters. Diagram is shown in Figure 2.

A short-term “solution” is used to correct a problem, with seemingly positive immediate results. Over time, the capabilities for the fundamental solution may atrophy or become disabled, leading to an even greater reliance on the symptomatic solution (Peter Senge, The Fifth Discipline, 2006)

As a result, we get two balancing loops and one reinforcing loop: 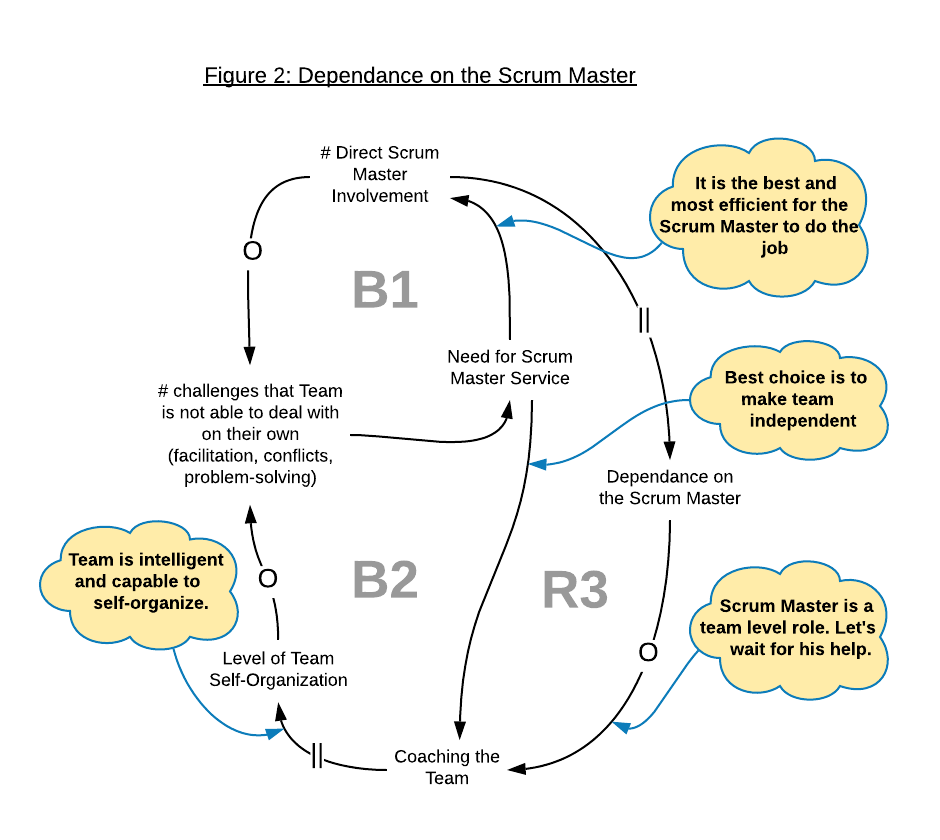 Since the Scrum Masters have been entirely absorbed by the “operational stuff” on the team level, they have not been devoting time to coaching organization. But organizational dysfunctions and impediments were still present. They were the cause of many team challenges, with which the Scrum Masters subsequently had to deal with locally. 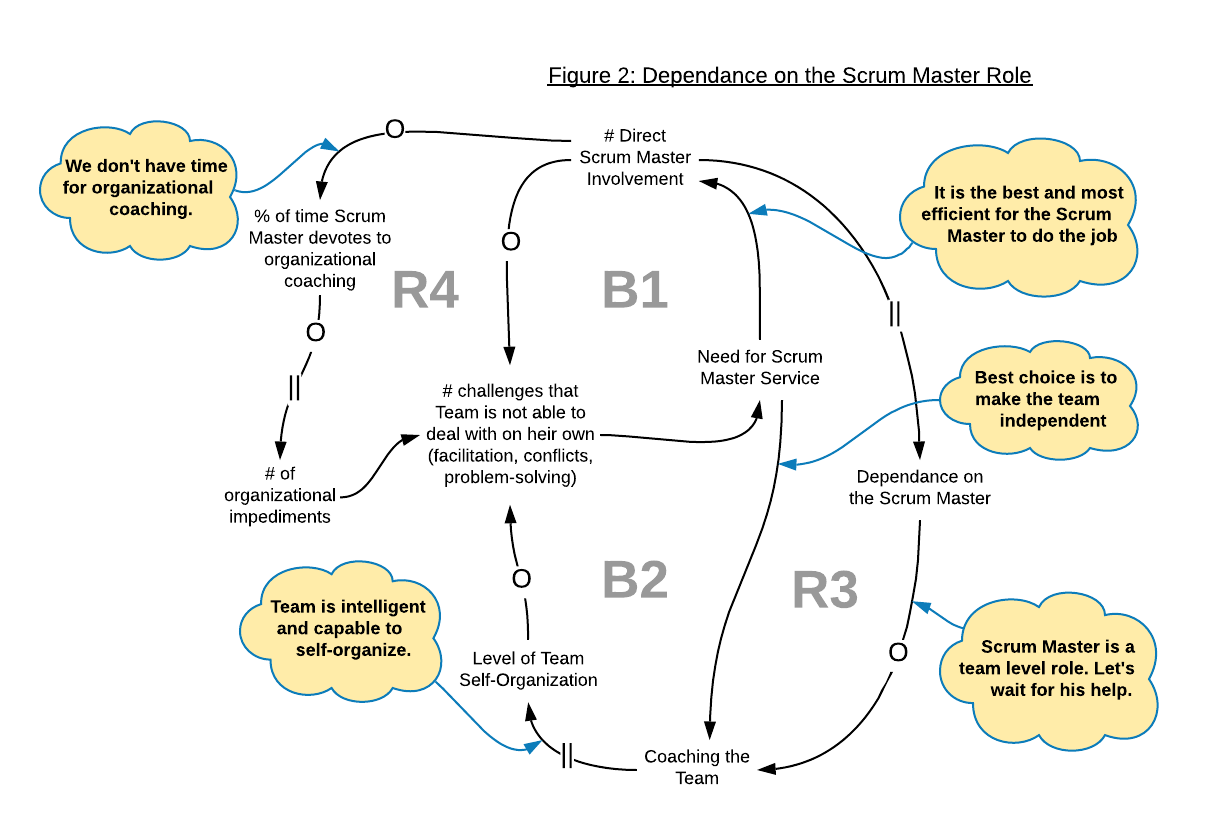 Examples of impediments: dependencies between teams due to narrow product definition, insufficient Product Owners authority, handoffs, poor cross-functionality, and so on. By visualizing this on a system diagram (shown in Figure 3), we obtain reinforcing loop R4:

Management was practicing Gemba Walks approach from Lean Thinking. Organizational level dysfunctions and impediments were on their radar. But since, in the management’s mental model, the Scrum Masters were not suited to coaching organization as a whole, for many years the company had engaged external consultants. The consultants did not work in tandem with the Scrum Masters and were not interested in developing them (see Scrum (Master) Coach pattern). Thus, in time, dependence on external consultancy grew. Let’s indicate this on the system diagram with the three loops, B5, B6, and R7, that depict together the second archetype, “Shifting the Burden” shown in Figure 4: 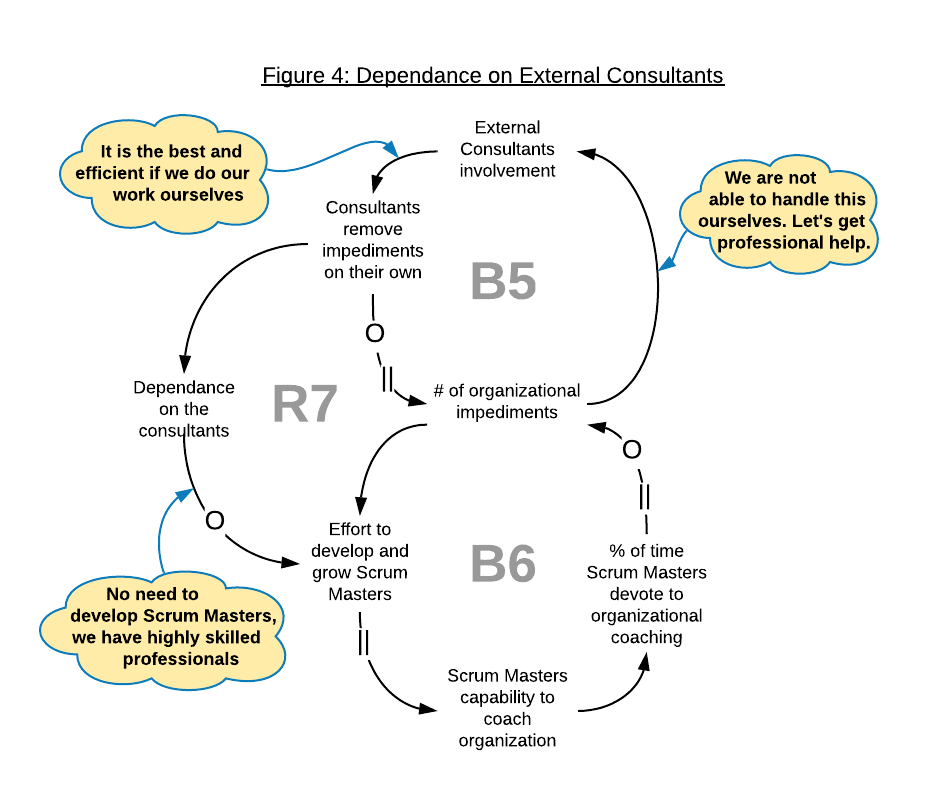 Combining two archetypes we get the resulting system diagram: 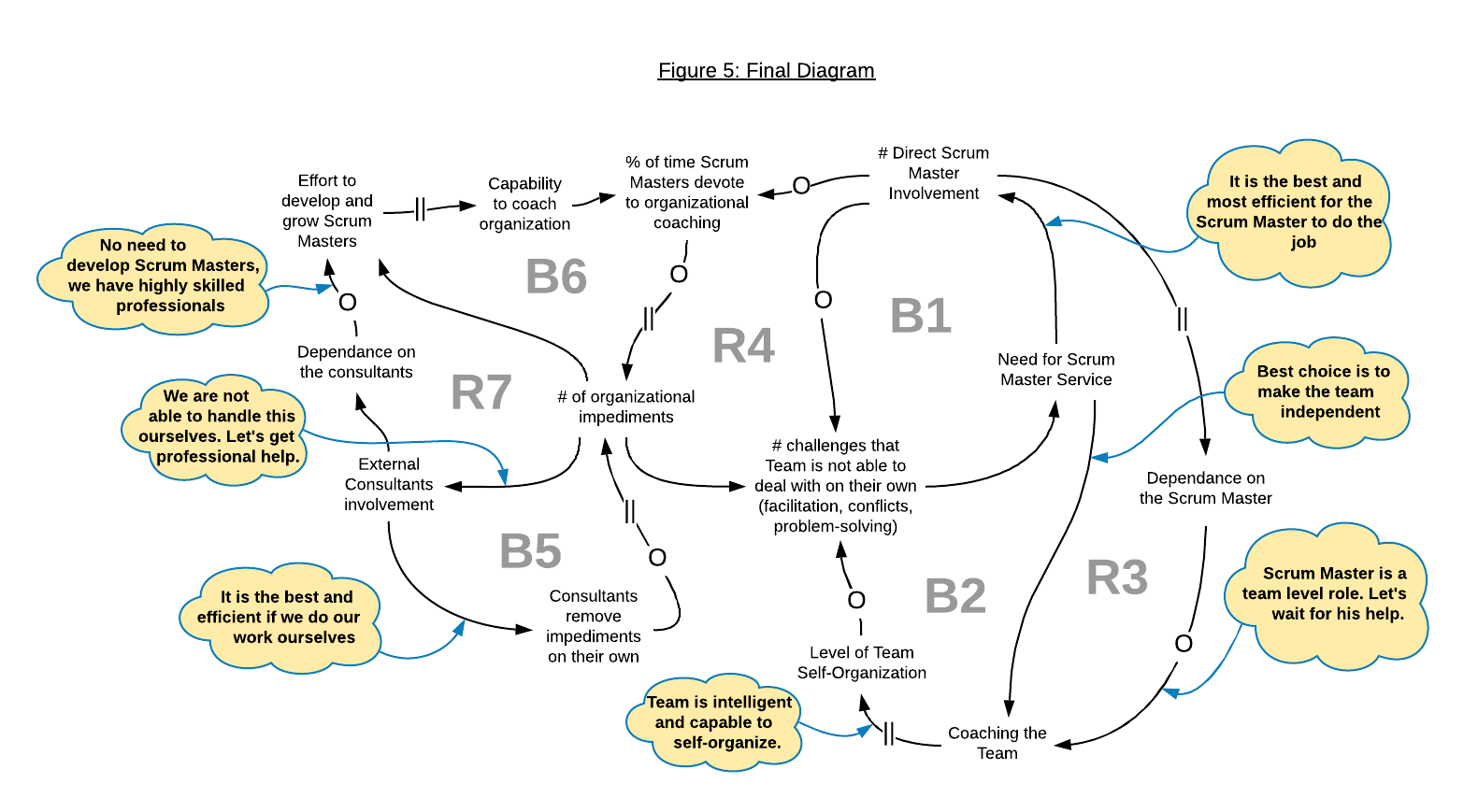 Three Steps for a Change

The investigation I conducted and the resulting system diagram would have been impossible without the three steps for change, which I practice during organizational coaching. It seems that there is nothing simpler than conducting an honest and independent audit and subsequently presenting the results. In practice, however, it is very likely that there will be resistance, since it is difficult for people to accept reality and take responsibility. Evolution has taught us to avoid conflict and social confrontation.

One of the things to look for are recurring events. Patterns that keep coming back over time. Patterns are often the result of the organizational structure, processes and policies the people work in. And these systemic issues can probably only be addressed by improving the organizational design. Contrary to believe, you cannot make substantial improvement on systemic issues by exclusively working on the people.

Thus, I had dozens of conversations with Scrum Masters, team members, and top managers during our Gemba Walks. I was present as a silent observer at various Scrum Events (Sprint Planning, Daily Scrums, etc.) and painstakingly noted down any repeating patterns (anything that happens more than three times) in behavior and looked for the system structures that were supporting them. In other words, I delved deeply into the context.

I conducted several Systems Thinking workshops for everyone I had interviewed to so people could build simple system diagrams and identify basic archetypes. Peter Senge defines system archetypes in the following way in his book The Fifth Discipline: “System archetypes are patterns of behavior of a system. Systems expressed by circles of causality have therefore similar structure. Identifying a system archetype and finding the leverage enables efficient changes in a system.”

Why was that important? The issue is that I do not recommend you compiling a systems diagram yourself and imposing it on people. There is a big difference between the insights that people obtain as a result of creating model themselves versus the one-way transmission of information by an external consultant.

After teaching the basics of Systems Thinking, I invited participants to create their own system diagrams. I also brought in and presented the most important variables. They were collected and prepared beforehand. 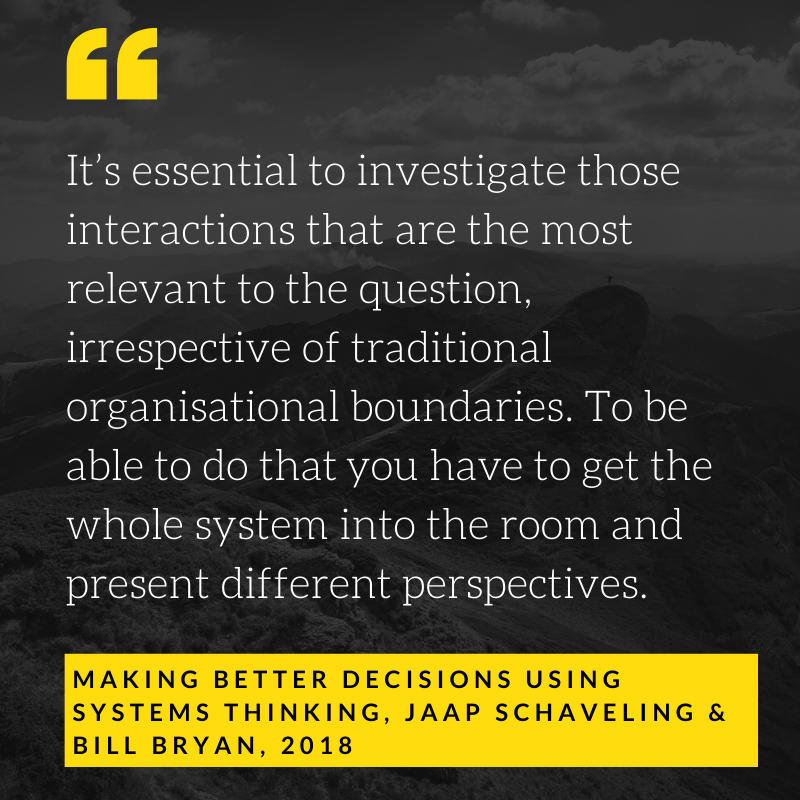 Large organizations have lots of politics. Often, the most important question that comes into the minds is: “whose fault is it?” It was important to create a safe environment first before conducting systemic analysis. I broadcasted the message that there was no blame. Systems comprise of the interrelated and interdependent parts that create a complex and unified whole. So the main goals of the workshop was to uncover the systems structures and dynamics, not to blame individuals or any departments, roles, business units and so on.

There is no blame (Peter Senge, The Fifth Discipline, 2006).

By working in small groups, participants came up with several versions of the diagram, each of which shed light on the real picture in a different way. The result of the workshop was the final system diagram that is presented above in Figure 5. Those who took part in the workshop agreed that it depicted precisely their organization. “That’s us,” said one, with a sigh. When people create a picture of reality together, and collectively own the solution, then they are significantly more inclined to support it.

The resulting solutions of the workshop:

Some time has passed since then.  Are there any concrete results? Did it work? Let us list a set of notable events that happened as a result of the change:

From what I have observed, the majority of the Scrum Masters indeed became more independent, skillful and capable. I believe that Systems Thinking approach helped them to build a foundation for the change.

As I’ve explored in this paper, Systems Thinking is a language and set of tools meant to illuminate our thinking about how the systems we are all part of, actually operate. It reveals the reasons for chronic problems in complex organizational contexts and is an important thinking approach for creating a general picture of reality, by means of engaging individuals with different viewpoints. Scrum Masters and Agile Coaches benefit from using Systems Thinking approach in organizational coaching.

Another important takeaway to remember is that one of the essential services of a Scrum Master is a service to the organization. The notion that the Scrum Master only works at a team level is a myth. Scrum Master always has two options: to get involved and solve the issue/problem himself, or coach the teams, making them more self-organized and autonomous.