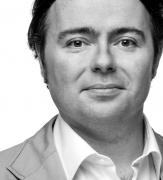 Alex has spent all his professional career, started in 1999, around software development, doing things such as:

Alex contributes to the Agile community in Spain by:

He lives and works in Barcelona, although he enjoys teaching and coaching around Europe.