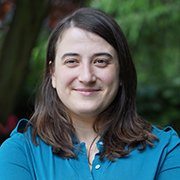 Kate is a consultant trainer and a coach with broad experience spanning from hardware corporations to small privately owned software companies. She focuses on helping companies foster self-organization and return more value than they did before.

Her main forcus are people - she is intersted in anthropology, sociology and psychology - how humans learn, interact, grow and create amazing things.

She wants to change something in the way people in Poland make software, so she founded Brass Willow, which is bringing together experienced trainers, coaches and technical experts who together want to make a true difference.